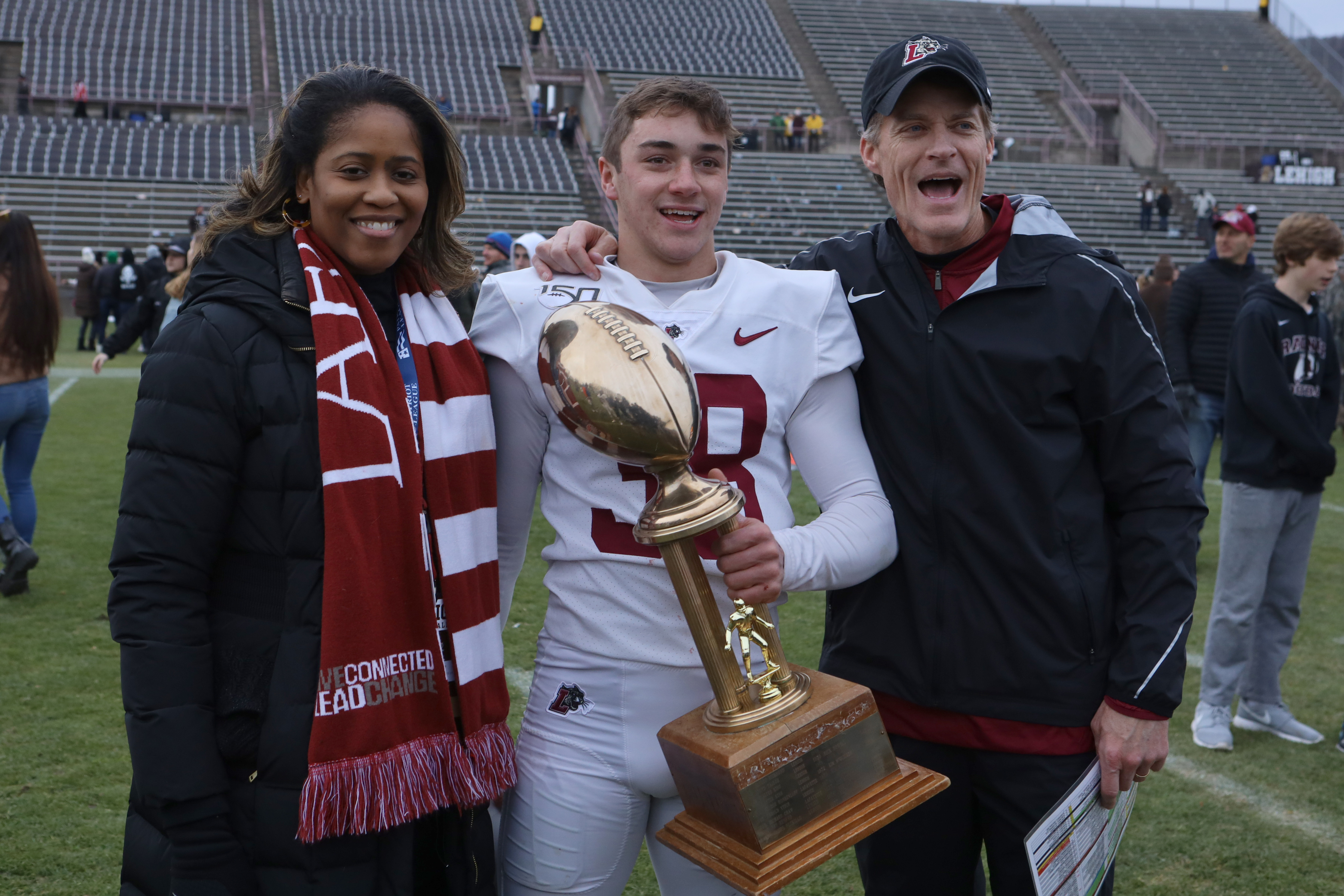 He’s an Academic All-Patriot League selection as a mechanical engineer, a member of the ROTC program and capped a superb season as the football team’s kicker with a game-winning, 28-yard field goal with 47 seconds left in the 155th Rivalry game over Lehigh.

Junior Jeffrey Kordenbrock took home MVP honors against the Mountain Hawks, marking the first time in five years that the Leopards beat Lehigh, and the first time since 1970 that a Lafayette kicker won the MVP award.

“It was an awesome experience,” Kordenbrock said. “I didn’t really know what was happening, but when the athletic director and my coach came up to me and gave me the MVP award, I was ecstatic.”

Although there aren’t many games quite as big as the Lafayette-Lehigh rivalry, Kordenbrock is no stranger to big moments. During his first season in 2017, he kicked the game-winning field goal as time expired to give the Leopards their first win of the season, and the first of head coach John Garrett’s tenure, at Holy Cross.

“I have the utmost faith and confidence in him to make those kicks and not freak out because he just has this inner drive, this innate confidence, and it comes from the work he’s put in,” Garrett said. “He’s demonstrated just by his ability and his approach and how he works hard that he’s ready for these situations.”

Kordenbrock has been kicking since he started playing football in middle school, and began honing his skill when he was a freshman in high school.

“I started playing football in middle school, but I was a tailback and middle linebacker with a little bit of kicking,” he said. “When I got to high school I was cut my freshmen year as a cornerback, but I knew I could kick, and I beat out the other potential kickers. As a freshmen I was the kicker and it just progressed from there.”

The football team scored 221 points across 12 games this season, with Kordenbrock accounting for 57 of those points and just over 25 percent of the total offense. It was only fitting then that he would finish off the Leopards’ best season since 2014 with the game-winner.

“We prepare for those moments,” he said. “Every Wednesday practice we have a two minute situation where we have to march the ball down the field so I practice a simulated high pressure situation. But nothing is quite like the game. In that moment, I revert back to muscle memory.”

“I was pretty relaxed before the kick,” Kordenbrock added. “I’ve been in similar situations in high school and at Lafayette. I kicked a similar field goal over Holy Cross, which [was] another big game for us.”

In addition to being the team’s kicker, Kordenbrock assumed the responsibilities of both kickoffs and punting midway through the season, according to Garrett.

“That does not happen a lot in college football and it doesn’t surprise me because [Kordenbrock] embraced it and he wants to do it because of his love for the game, his competitiveness and his joy to achieve,” Garrett said.

It seems Kordenbrock was almost made for this moment, as his path to Lafayette appears to have been predetermined by fate. As a member of ROTC and the football team, as well as being a mechanical engineer, not a lot of college coaches were willing to take a chance on a player with so many major commitments.

“I committed to Lafayette as a kicker during my senior year of high school,” Kordenbrock said. “This was one of the few schools where the coach allowed me to play football, be an engineer, and participate in ROTC. Once I visited the school and saw the campus, I knew I wanted to go here.”

Kordenbrock explained that although kicking at the collegiate level is tough, the most difficult thing to manage isn’t the pressure, but rather his commitment to the ROTC.

“It’s pretty tough being in the ROTC, I would say it’s probably the hardest part to manage for me,” he said. “In a typical day, I’ll go over to Lehigh in the mornings and have physical training over there. Then I’ll have ROTC class at Lehigh with football practice immediately after. I spend most nights working on my engineer work.”

With that said, Kordenbrock manages to do it all and performs each responsibility at a high level. He was named to the Second Team All-Patriot League this year for kicking, in addition to his academic honors. Kordenbrock’s goals for next year, however, are even bigger.

“I hope to be First Team All-League next year,” Kordenbrock said with a big smile. “I also aim to receive academic honors again, and I hope the team can win [the] Patriot League.”