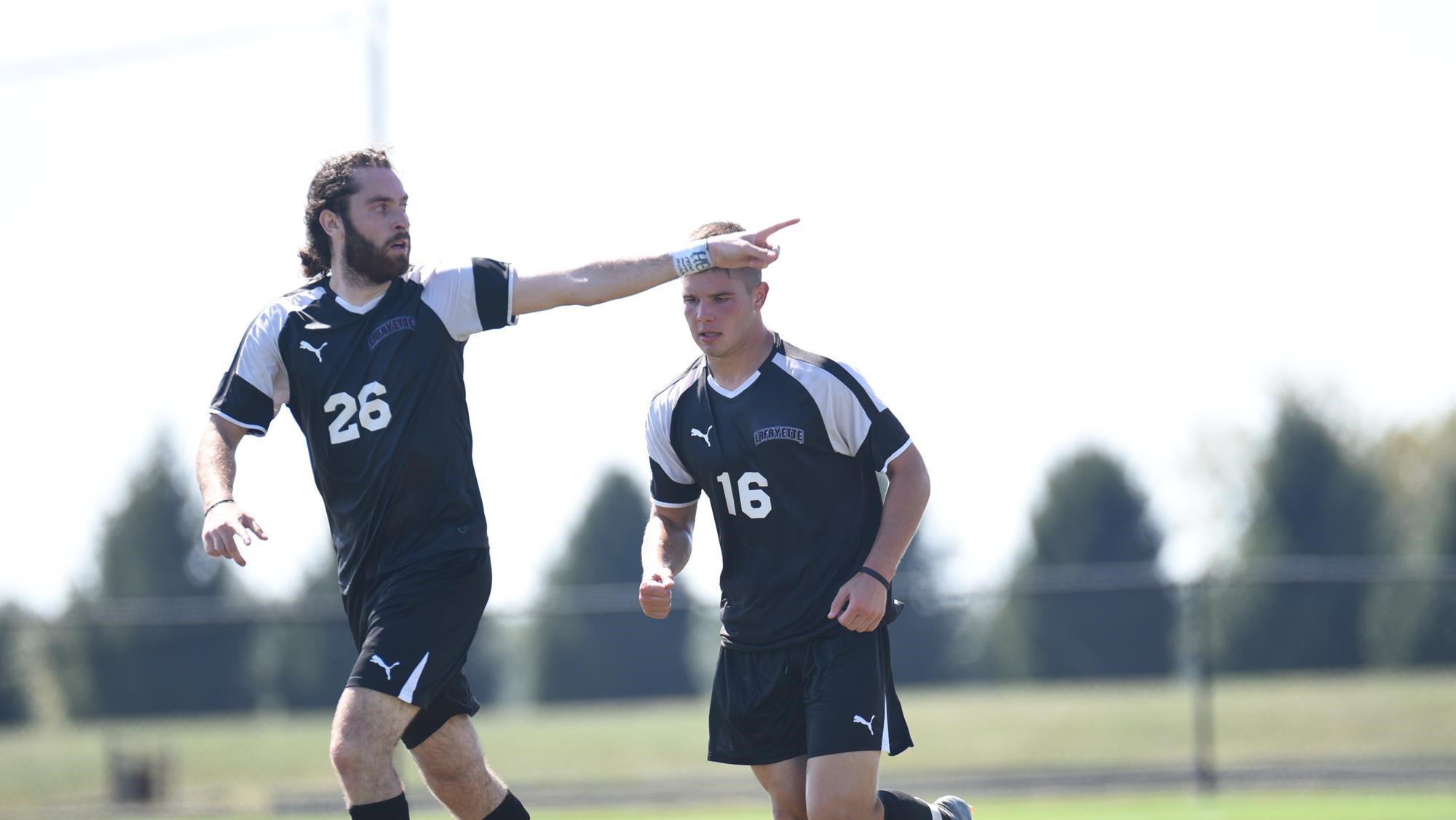 “I think that both Adam and Lisa had certainly tremendous careers here at Lafayette,” athletic director Sherryta Freeman said. “I think our maroon club executive committee and others that voted on those two awards really felt like the two of them stood out from the rest, and the performance of both our men’s soccer and field hockey teams were certainly indicative of the leadership that they had provided to their individual teams as well. I couldn’t be happier for both of them.”

Van der Geest hit the ground running in her freshman season in 2016, starting in 18 games, finishing first on the team in assists, second in points, and tied for third in goals. She also received both conference Defensive Player of the Week and conference Rookie of the Week awards, and was named to the Second Team All-Patriot League; an accolade she received again the following year.

“I actually wasn’t able to be at the event the award was given out at because I was at the DI senior game in North Carolina,” van der Geest wrote in an email. “My assistant coach told me right after the game, and I was obviously very honored! There are lots of amazing female athletes at this school and to be awarded this one was very special for me.”

This season, van der Geest helped anchor a defense which went 5-1 in the Patriot League and was named the conference Defensive Player of the Year. She also led the team in points and contributed seven goals, two of which were game-winners, to the Leopards’ offense.

Van der Geest carries a 3.70 GPA as an international affairs major, while also serving as a peer mentor, assisting at a local elementary school, and volunteering at the Safe Harbor shelter in Easton.

“It’s definitely a very rewarding award to receive as it embodies what we try to do every single day as a student-athlete: excel both on the field and in the classroom,” she wrote.

“My parents have definitely been a huge part in how I got to where I am,” she added. “They have always encouraged me to work hard, and at a young age taught me how to prioritize the right things and combine athletics and academics.”

Van der Geest also credits her coaches, teammates, and professors for helping her get to this point.

“One of my coaches at home told me this after our field hockey season, ‘Don’t try to push through a brick wall just because you told yourself at some point you had to,’” she wrote. “Sometimes I would get really frustrated with myself because I wasn’t achieving as much as I wanted to. He told me that it’s okay sometimes to admit you need time to work on something.”

Bramson is majoring in English and Film & Media Studies with a minor in Theater. In his first season, Bramson started in all 18 games as a midfielder and scored a game winner.

“Scoring my first goal as a freshman was an incredible feeling,” he said. “I remember right before running up the field for the corner kick, my coach yelled at me to ‘make a play,’ because I hadn’t scored a goal yet in the season. 20 seconds later, I was heading the corner kick into the back of the net, and I’ll never forget that.”

Bramson played in 14 games in his sophomore season and 15 games as a junior, but was limited this fall due to a medical emergency.

“This year, on the first day of preseason I had a heat stroke, and I went to the hospital for a week because my kidneys stopped functioning properly,” Bramson said. “There was a point in the hospital where I wasn’t getting better and the doctors didn’t know why, and I was just breaking down every day with the thought that there was a legitimate shot that I might be robbed of my senior season.”

Bramson scored three Patriot League goals as a defender when he returned to play, and praised his coaches for picking him up “both physically and mentally.”

“I was honestly shocked to get this award, I didn’t expect it at all,” he said. “I felt really honored to be invited to the event itself. All the other nominees [are] not only talented athletes, but great people.”

“Just being surrounded by people that were being inducted into the Lafayette Hall of Fame, I was pretty overwhelmed by the sheer magnitude of it,” Bramson added. “When I heard my name being called, it honestly felt like I was at the Oscars.”

Bramson credits his parents, coaches, and teammates for helping him along his athletic and academic journey.

“I’ve been incredibly grateful to have people supporting me along the way,” he said. “I’ve been blessed with two parents who have given me a lot of opportunities throughout my life, and I’ve played with some incredible teammates throughout my entire soccer career.”

Ryan Egan ’17 was a role model for Bramson during his first season on College Hill.

“I played defensive midfield and [Egan] played attacking midfield so we were right next to each other on the field,” Bramson said. “During my first year at the Division I college level, it was incredible watching and playing with someone who was not only so talented, but worked harder than anyone else on the field…it made me want to work as hard as him.”

In the classroom, Bramson made the Patriot League Academic Honor Roll with his 3.73 GPA, and is also a member of the Oaks Leadership Academy and the men’s soccer leadership council.

“[This award is] not just academic, not just athletic, not just for community service. It’s for all of those things,” he said. “It is an awesome moment, I’m incredibly grateful for it.”

Bramson also spent three years as a writing associate for the college, and also has acted in three plays during his time at Lafayette.

“My short term plans are up in the air,” he said. “Part of me wants to go overseas and play soccer for a little bit, which I’m exploring right now, but long term what I really want to do is comedy. I’m stand up comedian and I act, so that’s what I want to do with my future career. Maybe one day you’ll see me on Saturday Night Live.”