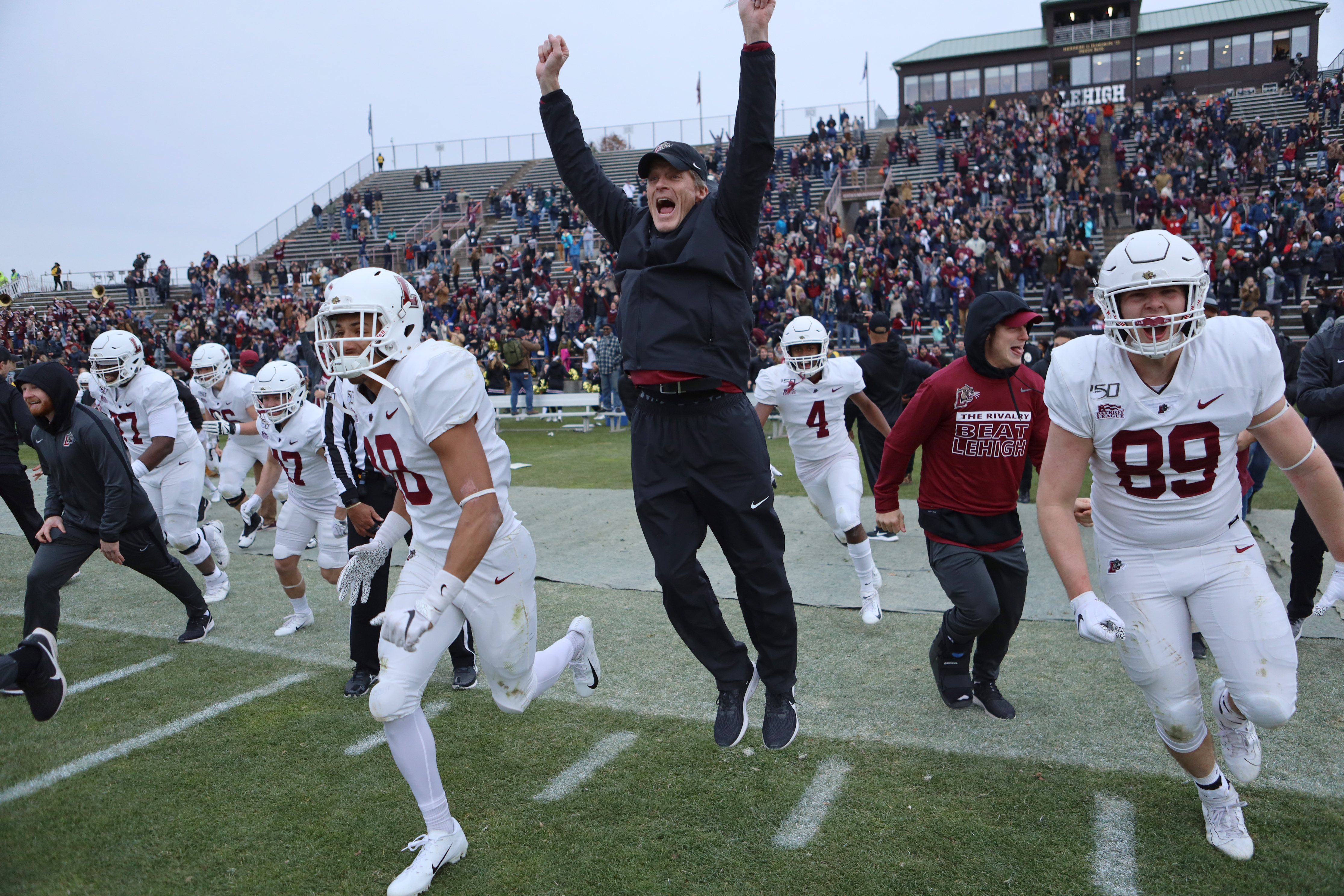 The snap. The dropback. The emphatic, game-clinching sack.

There had been blowouts, close games, and tough losses in other sports to the rival Mountain Hawks during the past few years, but a 17-16 victory on a cold and cloudy day allowed Leopard fans everywhere to put that all in the past.

“It was so competitive,” Garrett said. “Really two great storied rivalry teams playing a great version of it and it was back and forth, great effort by both teams…really proud of the effort and it was a great win, a great win for Lafayette.”

It was a long game, as these tend to be, and the action started early. Lehigh’s first passing attempt wound up in the outstretched hands of senior defensive back Yasir Thomas. It looked like the Leopards would have to settle for a field goal attempt, staring down a third-and-14, but junior running back Selwyn Simpson sliced his way up the middle 18 yards to the end zone.

Lehigh scored on their ensuing drive. Later in the half, the teams traded interceptions with freshman linebacker Marco Olivas and Lehigh senior linebacker Keith Woetzel making the picks. Eventually the teams reached halftime at a 7-7 deadlock.

Coming out of the gate in the second half, Lehigh fumbled on their first play from scrimmage. Sophomore linebacker Billy Shaeffer knocked the ball out and Olivas scooped it up. A few plays later, Simpson bulldozed into the end zone from three yards out and the Leopards had their touchdown lead again. Simpson received an unsportsmanlike conduct penalty during his touchdown celebration, and had a long embrace with Garrett afterwards.

“I said to [Simpson] ‘They called a penalty on you for spiking it,’ and he said ‘sorry coach’ and I said ‘I love you, let’s go win,’ Garrett said of the interaction.

Lehigh mishandled the kickoff on the very next play, and Lafayette took over at the Lehigh 38 after Thomas stripped the ball and senior linebacker Jack Lamb corralled it. The Leopards ended the drive on their only failed fourth down conversion attempt on the day.

The Mountain Hawks clawed their way back with a trifecta of field goals, and the Leopards offense stalled out, including Simpson’s ejection early in the fourth quarter after his second unsportsmanlike conduct penalty.

With 3:03 left on the clock, Lehigh leading 16-14, and the ball in freshman quarterback Keegan Shoemaker’s hands, the Leopards needed to score to win.

Shoemaker brought the ball to midfield on a scramble play, which Woetzel said he wished he could have back. It gave the Leopards offense the confidence it needed on the final drive.

“I just saw open field, and I had to take it,” Shoemaker said. “I knew we needed yards to get into field goal range.”

Kordenbrock made the 28-yard field goal, which stood as the game winner with the Leopards defense holding on for the last 47 seconds of the game. It earned the kicker the game’s MVP honors.

“[Kordenbrock] certainly was the MVP…it’s really important for him to be out there and he put it right through,” Garrett said. “He has this competitiveness and this concentration, and [in] the pressurized situations, he’s really come through. I really had no doubt because he’s done it, and I have a lot of faith in him.”

Kordenbrock said he “just kicks the ball,” but he knew the team’s offense would put him in position to do his job.

“Wherever they can get me I’m happy with, but if it turned out to be a 55-yard kick I’d be happy just to get that opportunity,” he said. “I was excited that they were able to get me a little bit closer, it was nice.”

There was time left on the clock, and the Mountain Hawks were still alive until Olivas shut them down with an electrifying sack to end the game. It was a fitting end to a game in which the Leopards defense came up with stops and turnovers when the team needed them. Garrett said turnovers were the difference in the game.

“That’s just the expectation, it’s the rivalry,” Jordan said. “Every week there’s a hype up for it, there’s a passion through the alumni, the emotion through the students and everybody just gets up for it. Being able to play in this game is an honor, it’s just a real good tradition, so we were just excited to come out here and play, it’s always going to be a battle and this is how the rivalry should be, a one-point win.”

The defense also held the Mountain Hawks to three field goals in the second half on their three trips to the red zone. Those drives ended at the three, 16, and five-yard lines, respectively.

“[Goal-line defense] is one of the biggest things that we worked on, and throughout the year I felt that we did really well with that,” Jordan said. “The defensive line gets a heck of a push up front, the defensive backs block up right inside the red zone and the linebackers are in the hole. I’m proud of all the guys and what they did, and the standard that they have when people get into the red zone and how important it is and how much we take care of it.”

The win ends a Rivalry drought that began after the Leopards finished off a win in 2014 under the Bronx lights at Yankee Stadium. Last year’s seniors graduated without a win over Lehigh, and this year’s narrowly avoided that fate. The Leopards move to 79–71–5 in The Rivalry all-time.

“The seniors, they really love this game and we did it for them because they never beat Lehigh before, so we wanted to send them out on a good note and that’s what we did here today,” Jordan said.

“I was really proud that everybody was on board for it and they took it really seriously, they found a reason to play this game, and I’m just very grateful for this opportunity,” he added.