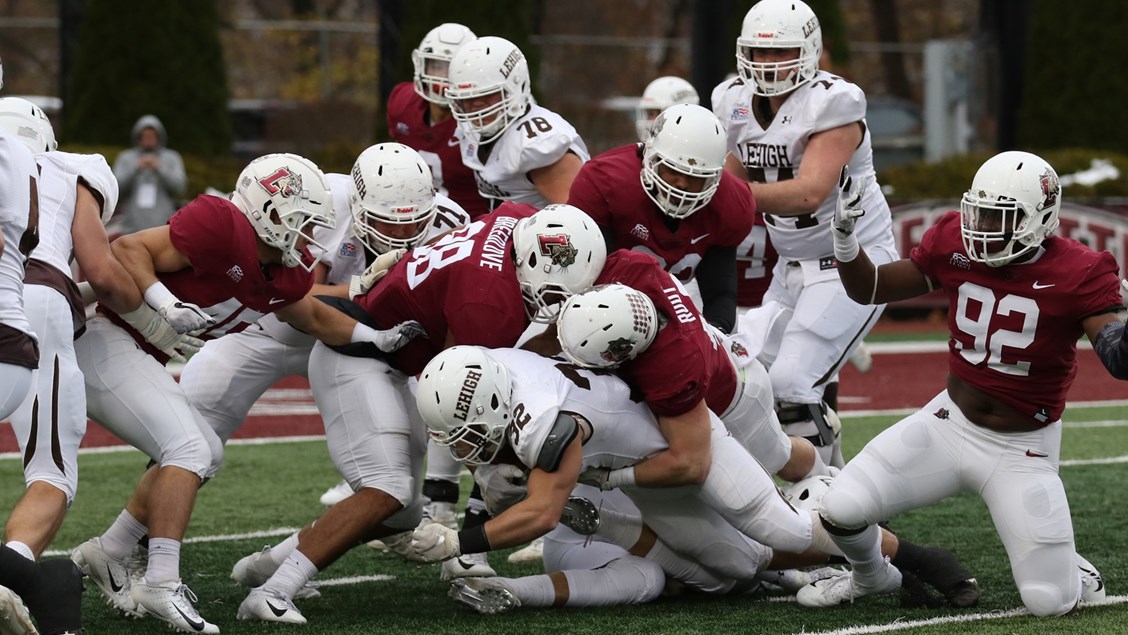 Lafayette has not won The Rivalry game since 2014 in the teams’ 150th meeting. (Photo courtesy of Athletic Communications)

Why Lafayette Will Win

Lafayette and Lehigh both enter their 155th Rivalry game at 3-2 in the Patriot League.

Lehigh started conference play with three consecutive wins, but losses to Holy Cross and Bucknell have left them out of contention for the title. Lafayette strung together three strong wins over Bucknell, Fordham, and Holy Cross, and will be looking for a bounce-back win after looking helpless against Colgate.

Lafayette’s difference-makers on offense this season have been freshman quarterback Keegan Shoemaker and junior running back Selwyn Simpson.

Shoemaker broke Lafayette’s single-game all-purpose yard record in his second career start, where he threw for 391 yards and rushed for another 138. For comparison, last Saturday the Pioneers held Lehigh to 259 yards total.

While Shoemaker was well contained last week, he was missing his top receivers in senior Nick Pearson, freshman Joe Gillette, and junior Quinn Revere. In their absence, senior Julian Spigner, freshman Jordan Hull, and sophomore Zadok Scott have stepped up.

Perhaps facing the Lehigh defense, which has given up 15 passing touchdowns to just six interceptions, will help bring back the version of Shoemaker who threw for five touchdowns in the two league wins over Holy Cross and Fordham. In total, Shoemaker has thrown for 14 touchdowns this season and run for three more.

While Lafayette’s defense this season doesn’t look as good as Lehigh’s on paper, the Patriot League has been a different story. The Leopards defense has given up 101 points to conference opponents, nearly identical to Lehigh’s 109. In a battle of offenses against similar defenses, Lafayette appears to have the upper hand.

Keep an eye on junior linebacker Major Jordan as well who’s averaged 9.4 tackles per game, good for third in the conference. Jordan has also added three sacks, and will look to keep the pressure on whoever is under center for the Mountain Hawks.

There is something to be said about the quality of each team’s wins. Lafayette’s two conference losses come from two of the bottom three teams in the standings, while Lehigh’s have come against the top two teams (excluding Lehigh and Lafayette). As Lehigh and Lafayette are tied for second place, this could bode well for the Leopards.

The Rivalry will be at Goodman Stadium this season, which may actually be good for the Leopards. Though Lafayette has lost their last two home Rivalry games by a combined score of 79-24, the last four Rivalry games away from Fisher (including the Yankee Stadium game), the Leopards have outscored Lehigh 143-122.

This year could be a close game, and will likely come down to Shoemaker’s decision making. His 17 total touchdowns have sparked the Lafayette offense, but he has thrown 13 picks as well.

Why Lehigh Will Win

Heading into the 155th meeting of The Rivalry, there isn’t an outcome that would be totally shocking. Lafayette (3-8) holds an edge in the Patriot League standings at No. 2 compared to Lehigh’s (4-6) No. 3 spot, but considering a matchup between one of the strongest offenses (Lafayette) versus one of the strongest defenses (Lehigh) in the league, there are cases for both optimism and pessimism in this one.

Lehigh will look to reverse its losing trend, following its three consecutive losses to Sacred Heart (13-6) and Patriot League opponents Bucknell and Holy Cross, 20-10 and 24-17, respectively. Both Lehigh and Lafayette sit at 3-2 in the league, so at the very least each team will finish this season with a .500 conference record, which is telling of their average seasons.

But let’s not discount the offensive weapons Lehigh has in its own cavalry. Senior wide receiver Devon Bibbens has been one of the few consistent players for Lehigh’s offensive unit, leading the team with 63 catches for 769 yards and six touchdowns.

Lafayette will also have to keep an eye out for freshman running back Zaythan Hill. Hill leads the team in rushing yards (342), and has already secured the longest touchdown run in Patriot League history after rushing for a 94-yard touchdown on Oct. 19 against Fordham University.

Both Bibbens and Hill have outperformed Lafayette’s leading rusher and receiver, but Lehigh’s offense will have to put forward a combined effort to outscore Lafayette’s No. 4 ranked offensive unit.

Fortunately, Lehigh’s defensive unit has undergone a complete transformation since last season, establishing itself as the second-ranked defense in the league.

The Mountain Hawks have allowed 218 points, 1,334 rushing yards, 2,250 passing yards and 26 touchdowns compared to the Leopards’ 303, 1,744, 2,369 and 37, respectively. Led by senior linebacker Keith Woetzel, Lehigh’s defensive unit has carried the team for much of the season.

Aside from being Lehigh’s top tackler with 107 stops, Woetzel also leads the Mountain Hawks with 12.5 tackles for loss and 9.5 sacks. On a national level, Woetzel is tied for first in the FCS in solo tackles per game (7.2), ninth in sacks per game (0.95) and seventh in total tackles per game (10.7).

Saturday’s matchup will certainly be a battle between Lafayette’s offense and Lehigh’s defense. However, even if the Leopards explode on offense, I don’t see it posing too much of an issue for Woetzel and the rest of the defensive squad. After all, Lehigh held the No. 1 ranked offensive team in the league (Georgetown) to 24 points, enough to secure the 27-24 victory.

But let’s step away from the statistics — Lehigh has home-field advantage, a reputation to uphold and the opportunity to clinch its fifth-straight victory over its arch-rival.

Factor in a packed Goodman Stadium, and I don’t see how Lafayette can walk away with the victory, especially given its atrocious 1-5 away record.

Lafayette’s performance will be as unimpressive as its spirit week sheets and Lehigh will once again establish itself as the dominant side in The Rivalry. Watching both Bibbens and Woetzel record season highs and receive MVP honors will serve as the cherry on top.

By Madison Schmitt ’20, Sports Editor of the Brown and White