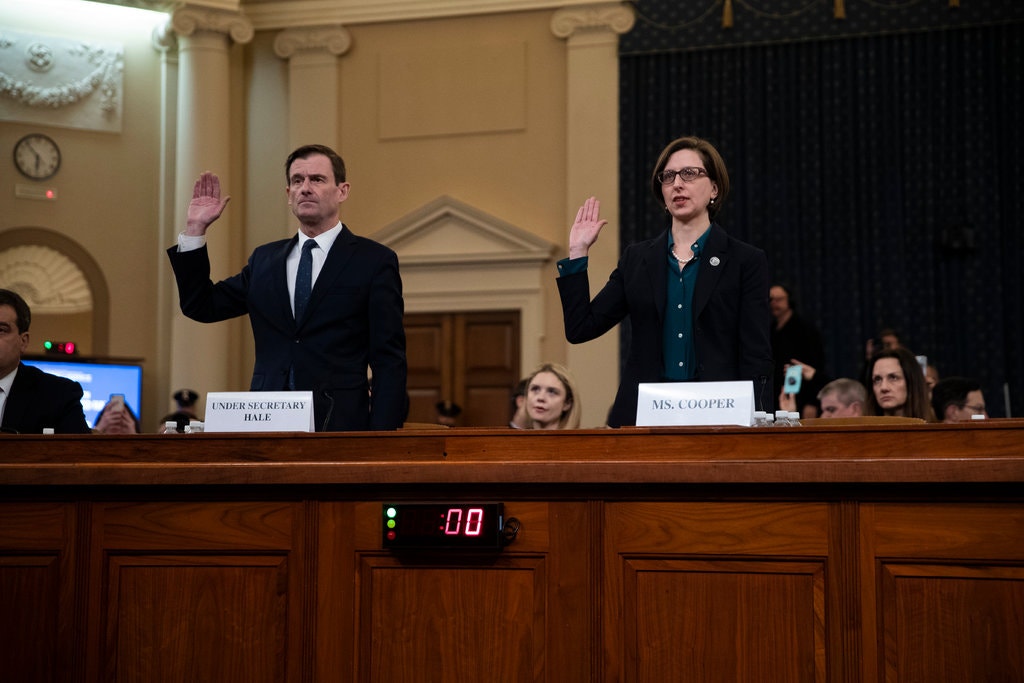 It is unclear when the House will move to a vote on the impeachment inquiry. (Photo courtesy of The New York Times)

This past week saw the continuation of public hearings with several key testimonies in the impeachment inquiry of President Donald Trump including the testimony of Gordon D. Sondland, the US ambassador to the European Union on Wednesday. Sondland’s testimony to the House Intelligence Committee directly implicated members of the Trump administration, including Trump himself, amongst other revelations about the nature of Trump’s debated call with Ukraine’s president, according to the New York Times.

House Speaker Nancy Pelosi announced the impeachment inquiry against Trump in September, after a whistleblower complaint against Trump about a call between the President and President Volodymyr Zelensky of Ukraine. The House voted to formalize the inquiry with a vote on Oct. 28, with the first public hearings held on Nov. 13.

“We’ve moved into the public phase, so the hearings have been held in public, which is mainly an attempt to build public support for the impeachment process,” John Kincaid, professor of government and public service explained.

There is little change in public opinion of President Trump since the beginning of the impeachment inquiry, with Trump’s approval rating remaining fairly stable throughout the process so far, Andrew Clarke, government and law professor explained.

“The goal of the impeachment inquiry is to lay out a case for public, and it may be too early to see the public’s response to this,” Clarke said.

Trump’s approval rating is currently stable due to the partisan split of opinions on the inquiry, according to Clarke. However, it is possible for this to change in a short period of time.

“Partisanship is an overwhelming thing in American society that doesn’t only affect our preferences and positions, it also affects how we interpret political news in a variety of ways,” Clarke said. “Americans are interpreting and understanding the case for impeachment in very different frameworks, and if they are getting a different set of contexts, then they might come to different conclusions and if those are steady then we’re going to see steady polling.”

“We are in the process of probably passing a continuing resolution which will keep open the government for a couple more weeks,” Clarke said. “In other words, we could get into a situation where we might have a government shutdown in the middle of the impeachment process, and that would be very dramatic, to say the least.”

As of now, impeachment is split among party lines, so when the inquiry goes for a vote in the House, as there is currently a democratic majority, it is likely to pass, Clarke said. However, it remains unclear when the House will vote.

“Two weeks ago, I would have said before Thanksgiving. Now I think that’s more questionable, so maybe sometime shortly after Thanksgiving. I would think before Christmas,” Kincaid said. “Before that whole holiday period. That way when the Senate reconvenes in January the Senate trial can begin almost immediately.”

“Otherwise it drags out because there is that long break right around Christmas time, and the impeachment process might lose some momentum if the hearings are continuing through that time. I think the house has an incentive to get this done before the holidays,” Kincaid added.

When watching the impeachment hearings, Clarke said he encourages students to use a variety of news sources to get a balanced view.

“There’s also a temptation to get tired of hearing about it over and over again, and no one should feel bad about that, but it’s also is a notable event and it’s something that as a citizen, in particular, you can have some effect [on] by calling your member of congress.”