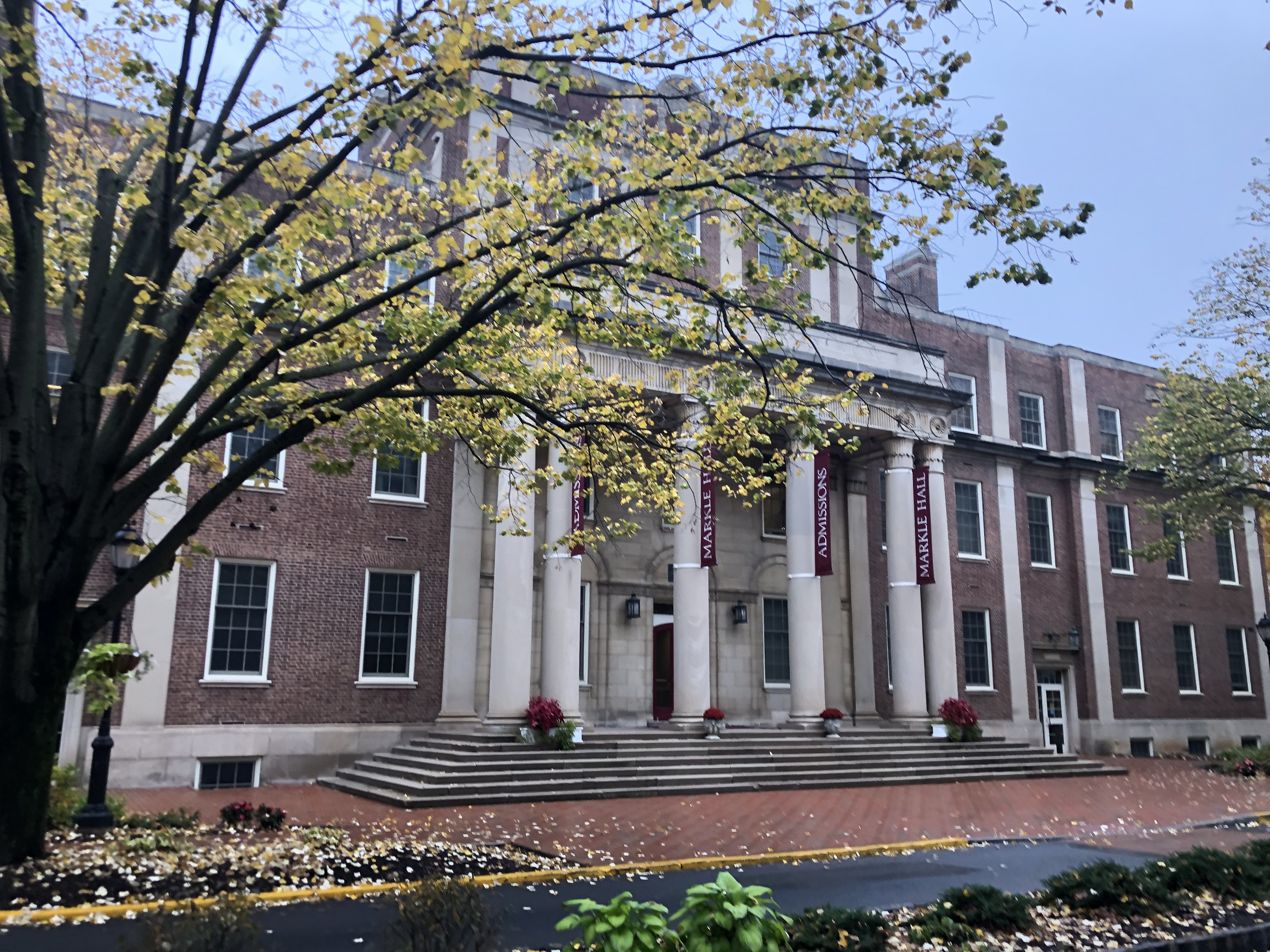 Tuition has gone up around $6000 over the last four years, but the merit scholarships have remained unchanged. (Photo by Brandon Marin ’22)

Next year, Lafayette will begin a pilot version of the revamped Marquis scholarship program, which will offer full tuition for recipients of the Fellowship and half tuition for Scholars.

“I think this is beneficial to the school because it would hopefully bring in more students with great high school performance from a variety of economic backgrounds,” Marquis Scholars and Fellows events coordinator Sydney Schock ’20 wrote in an email. “It’s my hope that more students will be able to choose a Lafayette education without worrying about large amounts of student debt.”

Although the college admissions team re-examines the merit-based scholarship program every four to six years, the most recent changes are particularly significant because the scholarships will now stay consistent with the rising cost of tuition.

“After a number of years, when you have an award that’s not appended to a tuition amount, that award gets less and less valuable,” Dean of Admissions Matt Hyde said. “So…I think there was an opportunity for us to be more strategic in awarding merit-based aid and appending it to a tuition amount.”

“We want this program to be in the conversation with the top-tier programs that offer merit aid,” he added.

With the Marquis Fellowship now covering full tuition, Lafayette stands along side schools like Davidson College, UVA, and UNC, all of which offer similarly selective merit-based programs. Neither Lehigh or Bucknell offer scholarships exceeding $30,000, according to their websites.

Offering fewer scholarships in total will make an already competitive program even more selective, but Hyde said that the criteria for the awards would not change significantly, as they have always been “relatively fluid based on who is most compelling from [the applicant pool].”

Instead of changing the criteria, the college hopes to further involve currently enrolled merit recipients in the selection process. Currently, both scholars and fellows can give feedback about scholarship candidates during the Marquis Dynamic Assessment day, but in the future, students could play an even greater role in choosing Marquis award recipients.

“What was always the vision for the program is that the community will come together and pick the merit scholars,” Vice President for Enrollment Greg MacDonald said.

The transition to the new program has not been entirely well received, however. Many current recipients of Marquis awards have said they are frustrated that the changes weren’t enacted sooner. With the tuition increases over the last four years, current seniors are paying around $6,000 more than when they first arrived on campus.

Schock said that she knew several Marquis recipients who were “adversely affected” by the tuition increases. Despite these “growing pains,” however, she said she felt the program would have a positive impact by giving students more confidence in the stability of their merit-based aid in the future.

“Our tuition increases are a challenge for many people, even more significantly for non-merit scholarship recipients,” MacDonald said. “There are significant sacrifices that many families are making to have their kids here, and we’re well aware of that.”

“The value that comes from a [Lafayette] degree is worth every penny here, and we’re very certain of that,” he added.

The changes to the Marquis program come amidst a broader ideological shift in the college’s approach to aid overall, led in part by efforts from President Alison Byerly to go need-blind by 2026 by increasing enrollment to further bolster the financial aid budget.

Vice President of Financial Aid Forrest Stuart said Lafayette is already among 70 colleges that meet 100 percent of demonstrated need for accepted students, although the college is need-aware in the admission process. The push for need-blindness would allow even greater socioeconomic diversity on campus in coming years.

“There’s a sociological impetus for it as well, in that we’re trying…to be transformational,” Stuart said. “Not just with the student experience, but meeting 100 percent of need and having a good distribution of incomes represented changes families, [it’s] intergenerational…we’re impacting that as well.”

“The more we do on the merit…we couldn’t afford on the need,” he added. “And so you really just continue privilege versus making a true impact.”

Many of the 70 other colleges that meet 100 percent of demonstrated need for admitted students, and especially those that are need-blind, do not offer any merit-based scholarships. MacDonald said that, although it is not currently feasible, this may be the direction the college is headed.

“I would rather be in a place that didn’t have any merit and we could enroll everybody strictly with need-based aid. That’s ultimately our goal,” he said. “But we’re not there yet.”

Schock said she is “wary” of entirely eliminating the merit-based award program because of its power in compelling high achieving students to come to Lafayette, as well as the financial security it offers.

“The Marquis Scholarship was a huge blessing for me,” she wrote. “When I was applying to colleges, my family’s biggest concern was financial aid. I felt like the college recognized me as a great applicant and that I would be able to afford my education for all four years, and these two things made it a lot easier for my family and I to choose Lafayette College.”

On the admissions side, MacDonald said that the merit-based program contributes to increasing the socioeconomic diversity of the college in ways that need-based aid sometimes cannot, especially for families that “appear to be low or no need” but still have a hard time affording the cost of tuition.

Whether or not the program is eliminated in favor of a fully need-based financial aid program in the future, Hyde said the current changes will help the programs efficacy in attracting students to Lafayette.

“We want our merit program to be truly meritorious, that is, rooted deeply in trying to compel the enrollment choices of those we are most compelled by…[but] we wanted to leverage the power of our need-based financial aid and show that we don’t actually need to have a merit-based program to enroll really compelling students,” he said.

“So let’s make sure that we are maximizing the power of our program with with larger dollar amounts, so we can truly compel that choice.”

Is the FASFA required to be considered for one of the Merit scholarships?