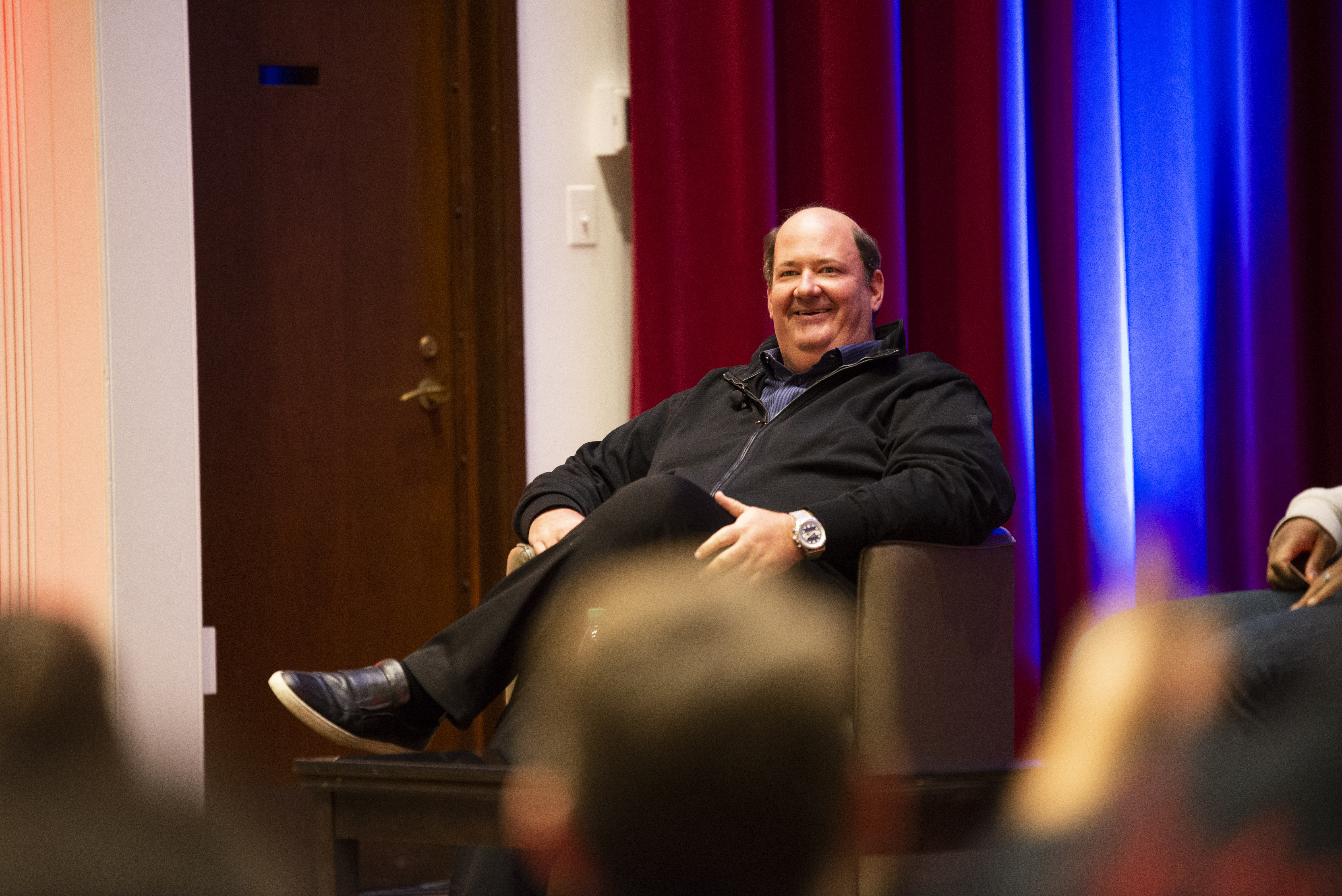 Lafayette students welcomed Brian Baumgartner, who played Kevin on ‘The Office,’ with anticipation and excitement this past Wednesday. (Photo by Brandon Marin ’22)

Lucky for us, today is Friday. Which makes it Kevin’s favorite day because: “at least once a year, I like to bring in some of my Kevin’s Famous Chili…It’s the thing I do best.” This is one of Kevin’s most famous quotes, which was aired in the fifth season of “The Office,” on the “Casual Friday” episode when Kevin, famously, spilled his chili across the office floor.

When asked about how many takes it took for him to execute the Kevin’s Famous Chili scene, actor Brian Baumgartner sassily raised one finger and said “one,” after producers explained to him that he only had three chances. This simple “one” was met with rounds of applause from the overflowing audience in Colton Chapel.

Baumgartner came Wednesday as part of the college’s rivalry week festivities for a casual Q&A session that was met with laughter, applause and anticipation from students, faculty and staff, many of whom said they were fans of the show. Baumgartner’s talk drew a noticeably large crowd, with students lining the walls in the back of Colton.

In addition to “The Office,” Baumgartner has been in various movies such as “My Boyfriend’s Meds,” “Ordinary World,” and “The Last Push.” He is also currently involved in various projects scheduled to come out sometime next year, including an animated Netflix Original and a project with Disney.

When “The Office” was first released, it was unlike any other show on American television at the time, which led to the near canceling of the show, according to Baumgartner. Unlike most shows, “The Office” didn’t have a laugh track, and it tackled topics on race and sexuality, which many other shows were not doing.

Apart from the lack of a laugh track and topics that the show touched on, Baumgartner said there was a story in “The Office” that needed to be told about people at a work place with different personalities interacting with a camera crew, according to Baumgartner. This storyline, he added, was driving force behind a majority of the decisions made on the show, including when the show would come to an end.

“Our boss…had a story that he wanted to tell,” he said. “The idea of a camera coming in and recording was an important thing for the show. Ultimately plugging into the camera, hiding from the camera, being aware of the camera, all the things.”

In the finale episode, the characters end up watching the documentary together and “seeing themselves” after nine years “and so it was important for him to tell that story.”

Part of the reason why the show became so popular was also that it resonated with a younger audience, Baumgartner said.

“What I think made it special was the collection of characters working in a small office,” he said. “It works for students and younger people in part because you guys are stuck in the classroom with people with different personalities.”

In addition to this, “I think the show appealed to the younger audience because it’s not nice. And I don’t mean that in a bad way,” he added. “The comedy is not nice, not easy. But I think it’s true, and it’s real. People who are younger, I feel, are more optimistic ultimately about their role. They’re not stuck in their way.”

Working together for so many years, the cast ended up becoming close friends with each other. Baumgartner said that for the first two years after the release of “The Office,” the cast would gather at one of their homes and watched the episodes together. To this day, Baumgartner is also still in a Fantasy Football league with some his former co-stars.

Throughout the talk, Baumgartner made several jokes that created an almost endless stream of laughter amongst the audience. In a notable moment during the Q&A, a student attempted to say Kevin’s famous line from season 8, episode 2: “Why waste time say lot word when few word do trick?”

As the audience reacted with laughter, Kevin got up and challenged the student by repeating the line back to him, and correcting the student’s rendition, to show that he could still do it better.

Several seconds of laughter from the audience and a silent stare-down from Baumgartner followed. His silence was eventually broken when Baumgartner whispered “Security, get the guy in the back,” into microphone, garnering more applause from the crowd.

A few questions from audience members also revolved around the possibility of a “The Office” reunion episode or series, or even a spin-off series focusing on the character of Kevin individually. Although Baumgartner did not confirm that any of these possibilities were in the works, he added that too many people continue to be watching the show for the possibility of a spin-off to be completely off the table.