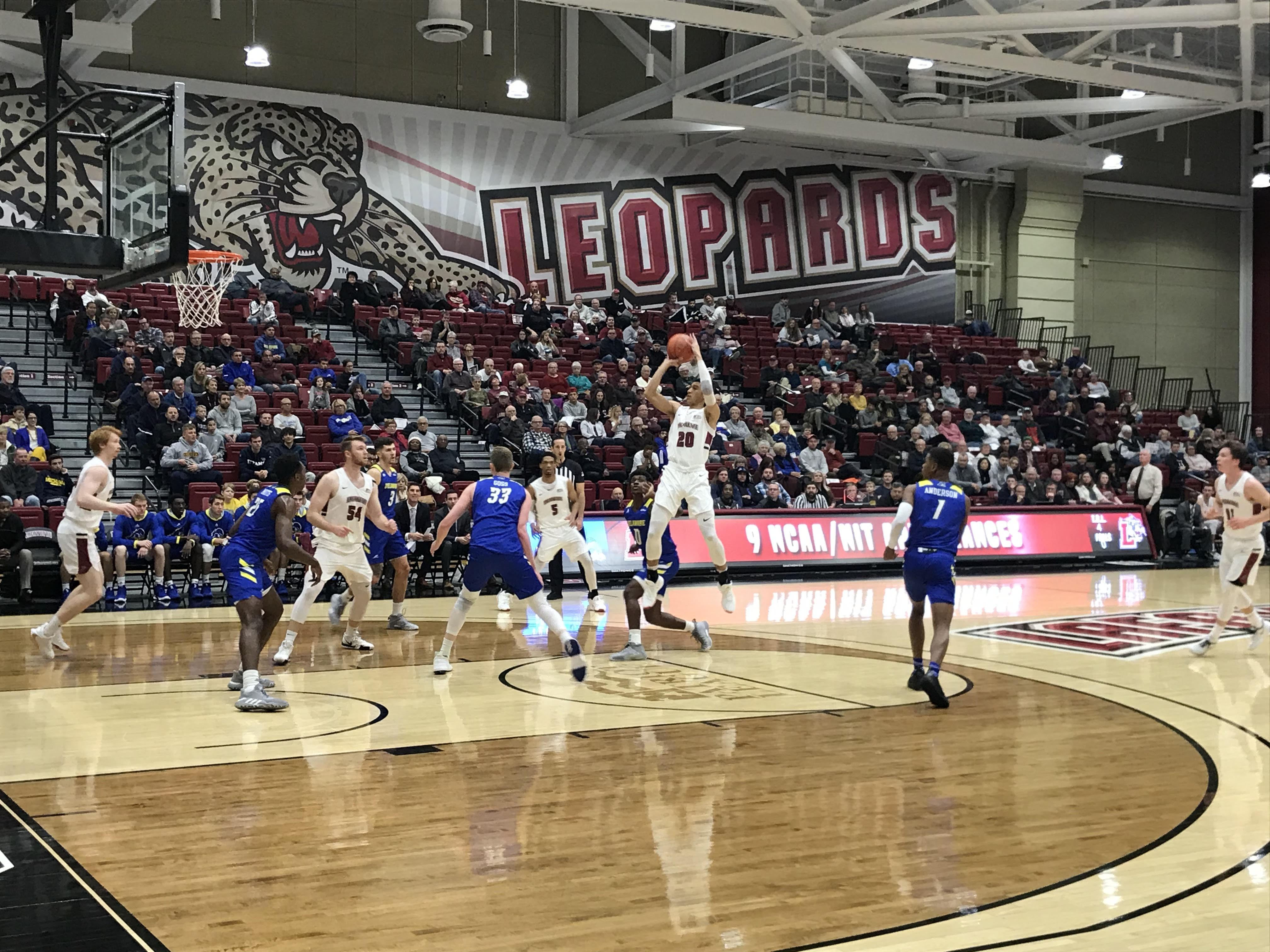 The Lafayette men’s basketball team split a pair of games last week, losing to Delaware 81-73 on Saturday before beating the University of Pennsylvania 86-75 on Tuesday evening. The team’s record is now 3-2 with just over a month left before Patriot League play begins in January.

In the game against Penn, it was an all-around offensive effort as five Leopards scored in double figures. After committing 18 turnovers against Delaware, Lafayette did a better job protecting the ball and gave up just five turnovers against the Quakers, helping the team record a season-high 86 points on the night.

“As a team we were focused and ready to go from the start,” sophomore guard Isaac Suffren wrote in an email. “After losing by 30 last year when we played Penn at the Palestra, we all had a chip on our shoulder. We came in ready to make a statement, and I think we did just that.”

Suffren and fellow sophomore guard Tyrone Perry both notched career highs in points with 19 and 12, respectively, combining to shoot an efficient 12-17 from the field. Junior guard and captain Justin Jaworski contributed 20 points and a career-high six assists and three steals. Jaworski extended his three-point streak to 53 games, second-longest in the nation, with his 4-6 shooting effort from long distance.

“It is pretty cool to think about that 3 point record, and I’m very grateful to be in the position I am,” Jaworksi wrote in an email. “I attribute it to two things: first that my teammates have done a great job of finding me and getting me open to have that opportunity, and second, hours and hours of putting work in on my own.”

Lafayette came out shooting in the first half, but an 13-2 run by the Quakers put Penn up 24-19 at the halfway mark of the opening half. Despite going cold for an extended stretch, the Leopards had an 11-2 run of their own, and went into halftime with the lead, 40-39.

The Leopards defense hunkered down in the second half, holding Penn to 38.7 percent shooting from the field and only 5-19 from beyond the arc. A three from senior forward and captain Myles Cherry just after the intermission kicked off a 21-12 run that gave Lafayette a 61-55 lead at the 11-minute mark.

“Coming out of the break, we were focused on starting the half strong,” Suffren wrote. “We didn’t get comfortable and knew that our offense was going to start on the defensive end first.”

A few plays later, Suffren fought through contact for an and-1 layup and made the subsequent free throw, extending the Lafayette lead to 64-55. A fast break dunk by Suffren made it 72-59 at the eight-minute mark, and the Quakers never got the lead down below six for the rest of the game.

Coming out of a timeout with just two minutes remaining, senior forward and captain Lukas Jarrett drove for a layup and converted through the foul for another and-1 layup, tacking on the additional point with his free throw.

“Basketball is a game of runs, so our goal was to limit how many runs Penn had,” Suffren wrote. “When they cut the lead to within 6, we stuck to our plan and stayed disciplined, which worked out for us in the end.”

In the Delaware game, the contest proved to be a game of runs and momentum swings, but Lafayette couldn’t generate a big enough run in the second half to overcome a 10-point lead by the Blue Hens. The Leopards did not have an answer to Delaware’s interior game, as the Blue Hens totaled 58 points in the paint compared to the Lafayette’s 28.

“Delaware is a very good team so we can’t get too caught up in that loss,” Jaworksi wrote. “The biggest issue in that game was our 18 turnovers, which was the difference in the game. We need to continue to do a better job defending and rebounding too.”

Jaworksi led the way with 21 points including five threes, and added a pair of assists and steals. Junior guard E.J. Stephens contributed 18 points, two short of his career-high, as well as three assists and three rebounds. Lafayette could not, however, overcome their 18 turnovers despite shooting over 50 percent from the field and 44 percent from long range.

The team will return to action this Sunday with a home game against Fairleigh Dickinson University (FDU) at 1 p.m.