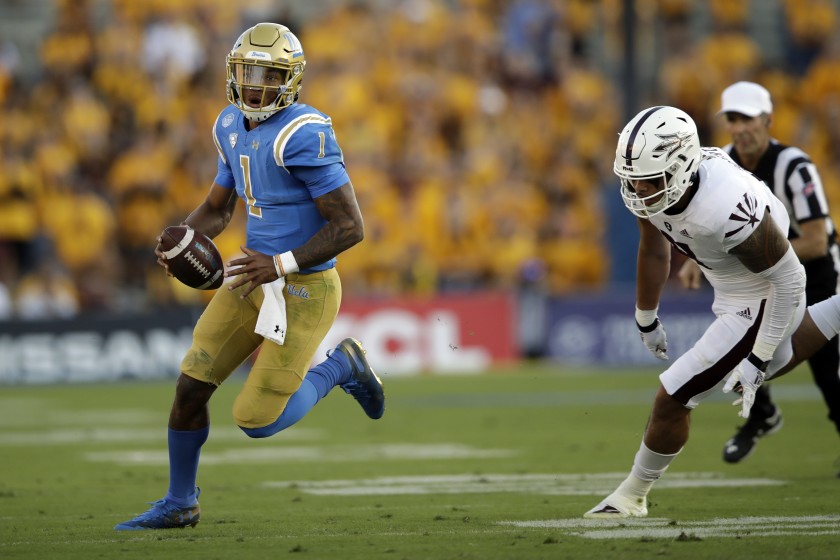 College athletes in California, like UCLA quarterback Dorian Thompson-Robinson (1), could profit off their name, image and likeness as soon as 2023. (Photo courtesy of Marcio Jose Sanchez, Associated Press)

The National Collegiate Athletic Association’s (NCAA) long-held policy that student athletes should not receive any monetary benefits beyond the price of tuition being paid is facing its greatest challenge yet. On September 30, California’s governor Gavin Newsom signed a bill that, when implemented, will allow student-athletes to profit off of their likeness, sign endorsement deals, and hire agents as a means of representation.

The NCAA currently prevents student athletes from receiving any additional benefits for the use of their likeness or “brand.”

About a month after California passed their legislation, the NCAA board of governors voted to allow for student athletes “to benefit from their name, likeness, and image.” As a result of this vote, the NCAA has reached out to each of its three divisions asking for new rules to allow for this change while still operating as a high integrity organization.

“I [say], it’s hard to know right now [how Lafayette will be affected] because the NCAA legislation is still being figured out,” said Athletic Director Sherryta Freeman. “But one of the things that I do know is that [it’s] going to change how we do things.”

“It’s Lafayette College, I don’t know how much we’ll be able to profit,” said junior Jermaine Rhoden, a high jumper for the track team. “If I were at a larger powerhouse school I would love to profit off of my image.”

“If you are doing something as an athlete that helps the school make money, it only makes sense that you should have a similar opportunity to benefit from that,” said senior golfer Will Halamandaris. “This change provides the opportunity to fill in the blanks with scholarships and other things. It would have allowed me to potentially make a little bit of money that I could’ve directly pocketed or used to put towards my tuition.”

Additionally, Halamandaris said he would have welcomed the opportunity to serve as a golf instructor over the summers, especially given his success last year after winning the Patriot League individual title in May.

“Because of this change, I think that student-athletes will become more responsible,” said Halamandaris. “Let’s say that if I’m in a position where if I have a great season, and then I’m able to market myself and earn so much money because of that, I would have put more work in. More so, with the monetary incentive, I would have just taken better care of myself in general.”

Junior tennis player Alexa Cooke, who runs a fitness Instagram account with a significant following, has missed out on financial opportunities in the past because of the NCAA’s current system.

“For non-athletes, if they have a skill that they’re good at or enjoy, they are able to market themselves for those skills,” said Cooke. “But, because we sign a contract saying that we’re a part of the NCAA, we’re not allowed to profit off the skills we’ve spent a lifetime to hone.”

“I’ve been reached out to by multiple companies who have wanted me to become brand ambassadors for them, but I’ve always had to turn them down,” she added. “Genuinely, the restriction in the past doesn’t just affect my athletic side, but also the side of me that asks, ‘am I genuinely enjoying this?’”

For all of the benefits this change can cause, there is still some call for concern. Prior to the implementation of this change, the NCAA will need to take the proper measures to ensure the transition to this new model is smooth.

As recently as 2017, the NCAA ruled the University of Central Florida (UCF)’s kicker Donald De La Haye ineligible for profiting off of his self-made YouTube videos, in which he stated that he was a member of UCF’s football team. Given the option to stop making videos or lose his remaining eligibility, De La Haye chose to forgo his remaining eligibility and scholarship in order to continue to profit off of his videos. Under California’s new legislation, De La Haye would have been able to continue making videos without risking his eligibility or position on the team.

“I think it’s a good step,” Rhoden said. “As long as the NCAA continues to listen to concerns and if the non-athletic population is properly educated.”