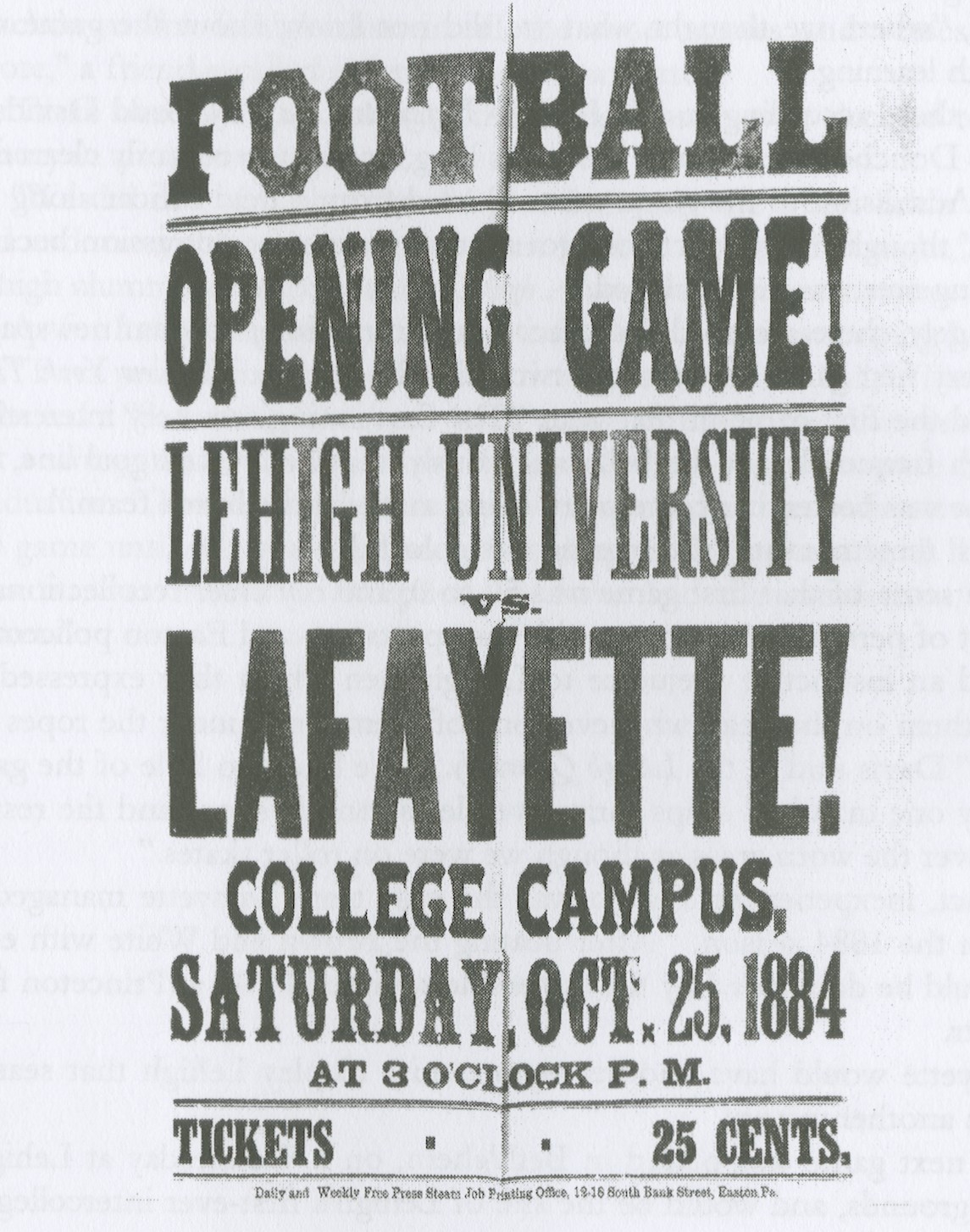 Lafayette and Lehigh played their first game against each other in 1884. (Photo courtesy of Lafayette College archives)

“We knew so little of the game that only one man had [cleats] on his shoes and the rest of us slid over the worn grass as though we were on roller-skates,” recalled Lehigh football player Richard Harding Davis following the first ever game played between Lafayette College and Lehigh University in 1884.

This weekend will mark the 155th game held between the two Lehigh Valley schools. The rivalry is the most played college football game in the country.

Even before playing football against each other, Lafayette and Lehigh were in competition with each other as engineering institutions with a liberal arts focus.

Historian David Bishop Skillman claimed in his book, “The Biography of a College,” that Lehigh University founder Asa Packer was approached to spearhead the engineering development at Lafayette, but refused due to the college’s Presbyterianism affiliations. He then founded his own institution.

Lafayette and Lehigh bonded in their enthusiasm for sport, but they were unable to establish successful teams early on due to a lack of support from the schools’ administrations to provide adequate facilities.

A writer for an 1872 issue of “The Lafayette” wrote: “We do think an earnest effort should be made to have a fine gymnasium on College Hill.”

Students on both campuses had to take matters of sports into their own hands.

In Francis A. March Jr.’s book “Athletics at Lafayette College”, an unnamed Lafayette trustee recounted his time playing football at the college in the early 1870s, explaining that pick-up games would occur all over campus, often between classes.

“The football of my day resembled the soccer of today,” the trustee stated.

Lehigh students would frequently join in on these games at Lafayette, thanks to the Lehigh Valley Railroad that connected the schools with a half-hour commute.

While Lafayette beat Lehigh in their first official game by a large margin, their success did not carry on long.

The Lafayette stated “The brilliant prospects with which the season opened have been clouded by one defeat after another… the Lehigh team seems to be the only one we can defeat.”

The scrappy beginnings of the Lafayette-Lehigh rivalry were the catalyst for the equally absurd festivities surrounding the game.

Frustrated with the lack of support from the administration, Lehigh students set fire to their stands at the end of the 1887 game after their first win.

Lehigh has had a historically long tradition of holding a bonfire paired with a pajama parade the night before the game. When this was banned in 1968, 450 freshmen rallied in protest.

In 1973, Lafayette students planted “LEHIGH SUCKS” on the field turf, which was strategically timed so that it was only made visible at kickoff.

Although many of these traditions have been dulled down, the spirit and excitement behind the game remains and is seen in the banners that hang outside almost every building on either campus leading up to the game.

Former Cincinnati Bengal and Lehigh quarterback Steve Kreider said “I was very fortunate to have played in a Super Bowl, but for me there was nothing more thrilling than playing in some of the big rivalry games at Lehigh.”

Lafayette-Lehigh rivalry will continue this weekend as Lafayette looks to beat Lehigh in their 155th official meeting at Lehigh tomorrow.

Steve Kreider was a receiver Andre a National Champion. Ruins the whole article.

Sorry about the autocorrect. * and a National Champion