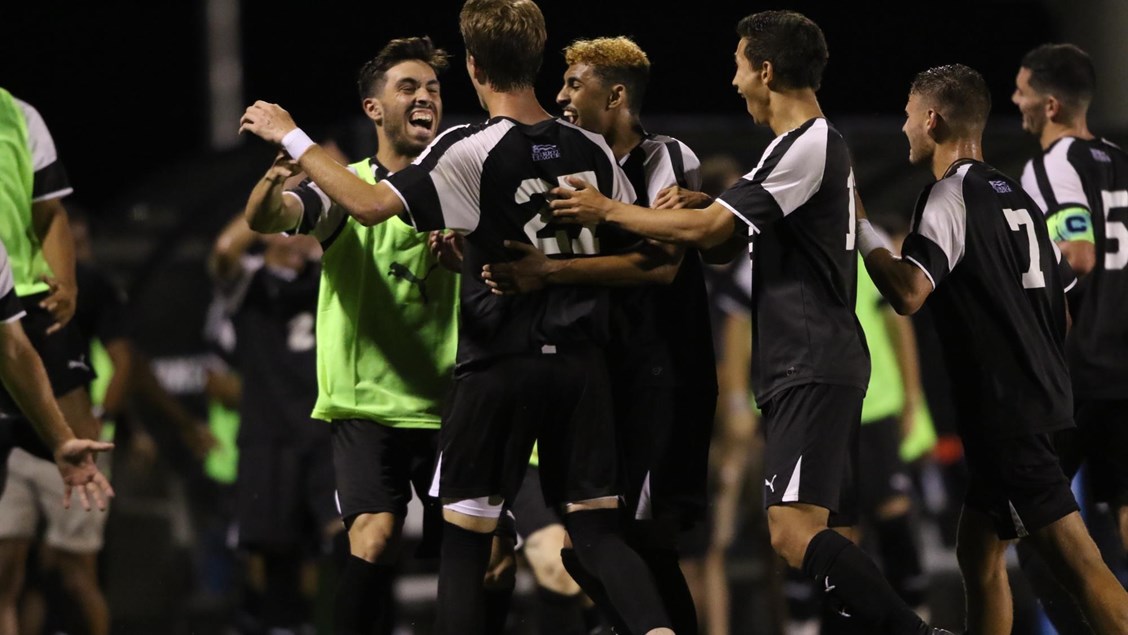 Men’s soccer will play in the Patriot League championship tomorrow against Lehigh for the first time since 2012. (Photo courtesy of Athletic Communications).

The Lafayette men’s soccer team is headed to the Patriot League Championship game for the first time since 2012 after defeating Loyola Maryland in the semifinal match on Tuesday.

The Leopards were ranked 10th out of 10 teams in the conference preseason poll in August, and will travel to face rival Lehigh tomorrow evening with a conference title on the line.

After no goals in regulation and two scoreless overtime periods, Lafayette won 5-4 on penalty kicks when junior forward Martin Ssessanga notched the game-winner.

“One of our pillars of our program is stamina. We feel that if the player is fit and stays healthy over the course of the season, they can perform at a higher level and will be effective in those 110-minute games,” said head coach Dennis Bohn. “Against Loyola, it was very evident that we were the fitter team. It shows that all the hard work they do with conditioning pays off.”

The Leopards defensive unit was put to the test in the first half of the semifinal game, as Loyola put up 10 shots compared to zero for Lafayette. Sutton played a perfect game in the net, making seven saves in his ninth shutout of the season.

“Alex Sutton has been a quality player throughout the whole season,” Bohn said.

In the second half, the shot total evened out a bit, with the Leopards taking six shots and the Greyhounds taking four.

The Loyola game marked the fifth overtime game of the season for Lafayette, with the last three ending in a tie after two overtime periods. In those five games, the Leopard defense has allowed two total goals.

“Communication helps. I think Alex [Sutton] and myself do a good job keeping the team together in that sense,” said senior captain and defender Christian Williams. “A big thing we emphasize is not taking a play off.”

“There was a play late in the game when [senior] Dylan Royalty turned the ball over, and Loyola was going in for a goal. He sprinted back 40-50 yards to make the goal saving tackle. I think this epitomizes this team and our program,” Bohn said. “Though we may make mistakes, it’s how you react. If he decided not to put that extra effort in, we probably would’ve lost 1-0.”

After the Greyhounds missed their first penalty shot, senior midfielder Ryan Goncalves found the back of the net to put the Leopards up 1-0 in penalty kicks. Loyola quickly responded with a goal to even the score, and the two teams would each make their next three shots, with sophomore midfielder Sebastian Varela, sophomore forward Marcos Kitromilides and Williams all converting their penalty kicks to keep the Leopards in the game.

With the score tied at 4-4, both teams would miss their next shot before Ssessenga’s penalty shot gave Lafayette a 5-4 victory in the shootout and secured their spot in the Patriot League championship game.

On Saturday, the Leopards beat three-time Patriot League champion Colgate 2-1 to advance to the semifinals against Loyola. An early foul by the Raiders led to a penalty kick for Lafayette, which Kitromilides put in the back of the net to open the scoring.

Colgate responded with an equalizer in the 32nd minute, and the teams headed into the halftime break tied at one.

The Raiders nearly scored to open the second half, but Sutton made a diving save to preserve the tie. He finished with three saves and one goal allowed.

Goncalves’ goal in the 58th minute, off an assist from senior forward James Gibson, proved to be the game-winner and sent the Leopards into the Patriot League semifinals for the first time since 2012.

“It was definitely a preseason goal for us, so we were excited about achieving that level of success,” Bohn said. “It was a great step for the program.”

“To persevere past being ranked 10 out of 10 [in the league] and knock teams down week-to-week just shows what kind of team we are and how much we’re willing to fight,” Williams added.

The Leopards will travel to Bethlehem tomorrow to take on top-seeded Lehigh and the two-time reigning Patriot League Offensive Player of the Year Mark Forrest. The two teams tied 0-0 after two overtimes on October 26.

“[Lehigh’s] forward was conference offensive player of the year, so shutting him down is gonna be huge,” Williams said. “Physically, it will be a strong battle.”

“Every time I’ve thrown a challenge at this group this year they’ve risen to that level,” Bohn said. “In the end, we have a very strong team and I think we’ll find a way to prevail.”

Lafayette is offering complimentary round-trip bus transportation and game tickets to all students for the championship game, which starts at 6 p.m. tomorrow. The fan buses will depart at 5 p.m. on Saturday from Sullivan Road between Marquis Hall and Sullivan Tennis Courts, and return to campus following the game.