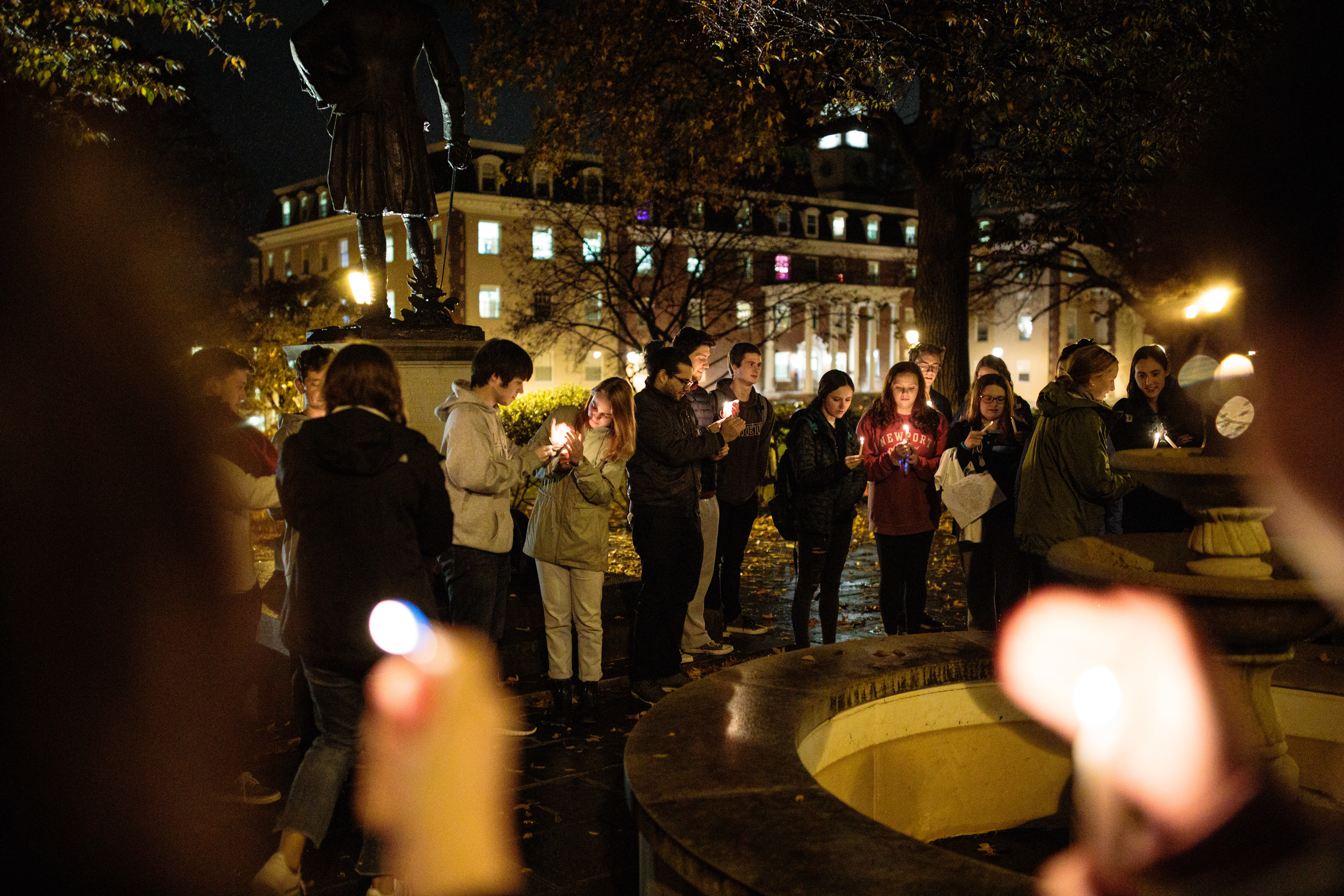 At the third annual Take Back the Night keynote event, co-sponsoring groups were not required to meet the previous 80% attendance level. (Photo courtesy of Clay Wegrzynowicz)

The lights were dimmed in Colton Chapel as three audio recordings detailing the stories of sexual violence survivors were played for the crowd. You could hear a pin drop.

Pards Against Sexual Assault (PASA) then displayed a ribbon with words that come to mind when one hears the phrase “victim blaming.” The ribbon consisted of words that the campus community had submitted through a survey in late October, with the size of the word corresponding to the frequency of its submission. Words such as “rape,” “shame,” “guilt,” “slut,” and “wrong,” were among the most prevalent words shown.

PASA hosted their third annual Take Back The Night (TBTN) keynote event last Thursday, as members of the Lafayette community gathered in solidarity to show support for victims of sexual misconduct.

This academic year marks the first for PASA without their co-founders Reeve Lanigan ’19 and Nina Cotto ’19, who both graduated in May. The turnout for Thursday’s keynote was smaller than in years past, but Ella Goodwin ’21, president of PASA, and Emma Piascik ’21, vice president of PASA, said they believe that can be attributed to the co-sponsoring organizations not being required to have 80 percent of their members attend the event, as they have been in previous years.

Piascik said that PASA believes this system was better because those who attended the event were there because they wanted to participate, rather than feeling obligated to attend due to a group affiliation.

“I think it was a great idea, and it went really well not requiring attendance from co-sponsorships, and it’s definitely something we’re going to do in the future,” Piascik said. “Having the people there who care is way more meaningful than just having people and bodies there.”

“Last year there were some concerns with…people just [being] there because they have to be there is a kind of a false sense of community,” Goodwin added. “It’s a discussion, and we want people who are actively going to participate and want to get something out of it.”

The keynote included a student-led panel discussion on victim blaming, and was followed by a candlelight vigil and survivor speak-out in the courtyard behind the chapel. The panel included Goodwin, Joey Illuzzi ’21, a peer educator, Gillian Branam ’20, president of the Mental Health Coalition on campus, and Sophia Giovanelli ’20, president of Quest.

“Ella Goodwin and the entire PASA team worked hard to create a platform for the community to have an authentic conversation about our campus,” said Dean of Students Chris Hunt. “Not only was it well-organized, but also real, powerful, and honest.”

The keynote and vigil concluded a week’s worth of TBTN events, including a 5k run/walk on Wednesday and a clothesline project in Farinon on Monday.

“I believe the entire week of programming was excellent,” Vice President of Student Life Annette Diorio wrote in an email. “The event on Thursday was constructed really well to engage students in conversation.”

One of the biggest challenges facing PASA, Goodwin said, is keeping the dialogue around sexual violence throughout the year, instead of just during one week in November. She hopes that PASA can shift their focus to peer education with the athletic programs and the Greek life community, while also programming throughout the school year by hosting workshops and general body meetings.

“We’ve been trying to [expand] a little bit but it’s been hard to make that consistent,” Goodwin said. “More things interspersed throughout the semester rather than focusing mostly on Take Back The Night…right now it was a little bit like that group that does that thing in November, and I think we’re well known but not the most active on campus other than that because the workshops are behind the scenes.”

“We want to open up discussion more frequently so these issues are spoken about more frequently and thus keeping it in people’s heads,” Piascik said. “A lot of the students brought up points about ‘what can we do as individuals to improve our community?'”
“Just sitting here and talking about it is the first step, but then what happens after that?” she added.

Seven counts of sexual misconduct have already been reported this semester, all of which are still under investigation. Since November 1st, the number of reported sexual misconduct incidents has increased to 12. According to the National Sexual Violence Resource Center, one in five women and one in 16 men are sexually assaulted while in college. More than 90 percent of sexual assault victims on college campuses do not report the assault, meaning that the true number of survivors at Lafayette may be considerably higher.

“Our college is very socially stratified and segregated,” Goodwin said. “I think how you are perceived if you come forward with something like [sexual assault] sometimes unfortunately depends on your social standing. I think regardless you face a lot of issues.”