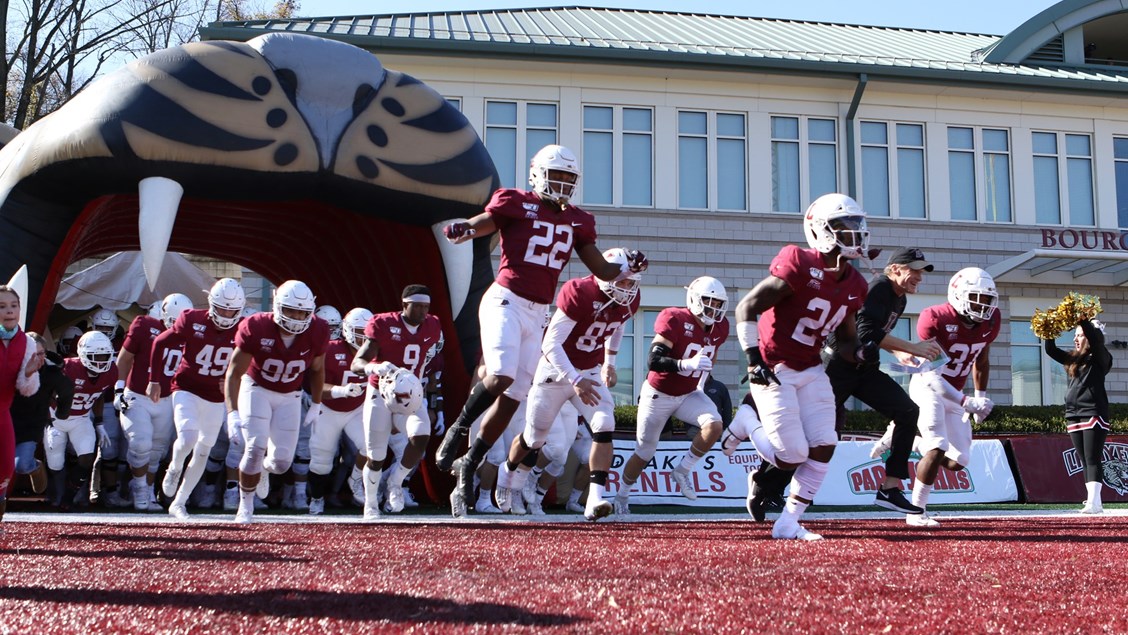 The Lafayette football team surged into first place in the Patriot League with a 23-20 win over Holy Cross last Saturday, extending their winning streak to three games and inching one step closer to a conference championship.

“I was really proud of how our team played [against] Holy Cross,” said head coach John Garrett. “That was a big, strong, good football team that we played and to get a win on the road [in] a league game is a credit to our players and how they played.”

Freshman quarterback Keegan Shoemaker completed 16-25 passing for 196 yards and two touchdowns, and was named both the Patriot League Offensive Player and Rookie of the Week. With two games remaining, Shoemaker has set a Lafayette single-season passing yards record for a freshman with 2,299 yards.

On their first possession of the game, Holy Cross converted a 43-yard field goal to open a 3-0 lead. On the ensuing Lafayette drive, Shoemaker connected with senior wide receiver Julian Spigner for a 48-yard touchdown that put the Leopards on top 7-3.

“We were running the ball really well in the first quarter, and it just really brought the safeties down and allowed us to take shots down the field,” Shoemaker said.

Lafayette quickly got the ball back after junior linebacker Ryan Dickens forced a fumble at midfield and fellow junior linebacker Major Jordan recovered it. The Leopards needed just two plays to capitalize, as Shoemaker rushed for 12 yards and a first down before throwing a 34-yard touchdown pass to freshman wide receiver Julius Young. Lafayette led 14-3 at the end of the first quarter.

“We work with drills every practice to work on disrupting the ball and creating turnovers,” Jordan said. “[And] this week it happened for us and we ended up winning the turnover margin by a good bit.”

Early in the second quarter, the Lafayette extended their lead to 17-3 on Kordenbrock’s 32-yard field goal after an 11-play, 56-yard drive. Holy Cross responded with a touchdown to narrow the lead and then quickly got the ball back after forcing the Leopards into a three-and-out.

With the Crusaders starting their drive in Lafayette territory, it looked like they would even up the game going into halftime. Holy Cross had a first down at the Lafayette 27-yard line when freshman linebacker Marco Olivas forced a fumble and sophomore defensive back Caleb Burr recovered it. The Leopards went into halftime up 17-10.

On the kickoff to begin the second half, the Lafayette special teams unit caused another Holy Cross turnover when freshman linebacker Luke Ragone forced a fumble that freshman running back Dylan Crossen recovered. The Leopards quickly capitalized on the turnover and field position with Kordenbrock hitting his second field goal on the afternoon, a 31-yard kick to extend the lead to 20-10.

The Crusaders once again responded, putting together a lengthy 14-play, 63-yard drive which ended with a 32-yard field goal and brought the score to 20-13.

When the fourth quarter began, the Leopards forced yet another turnover when Dickens forced his second fumble which was recovered by sophomore linebacker Billy Shaeffer at the Holy Cross 38-yard line. A few plays later, Lafayette added on to their lead with another Kordenbrock field goal, this time from 40 yards out, bringing the score to 23-13.

Senior defensive back Eric Mitchell intercepted a pass on the following Holy Cross drive, but the Leopard offense punted on their next two possessions.

“Obviously a big part of the game was the turnovers,” said Garrett. “We generated five of them, forced four fumbles, and got the interception and [it] really put us in plus territory a lot.”

The score remained the same until the two-minute mark when the Crusaders pulled within three on their second touchdown of the afternoon.

With two minutes remaining and no timeouts left, Holy Cross attempted an onside kick which Lafayette senior wide receiver Jake Liedtka recovered. The Leopards were able to run out the clock for their third straight conference win.

Lafayette hosts Colgate in Patriot League play tomorrow with kickoff scheduled for 12:30 p.m. The team will travel to Lehigh the following Saturday for the 155th meeting of college football’s most-played rivalry.