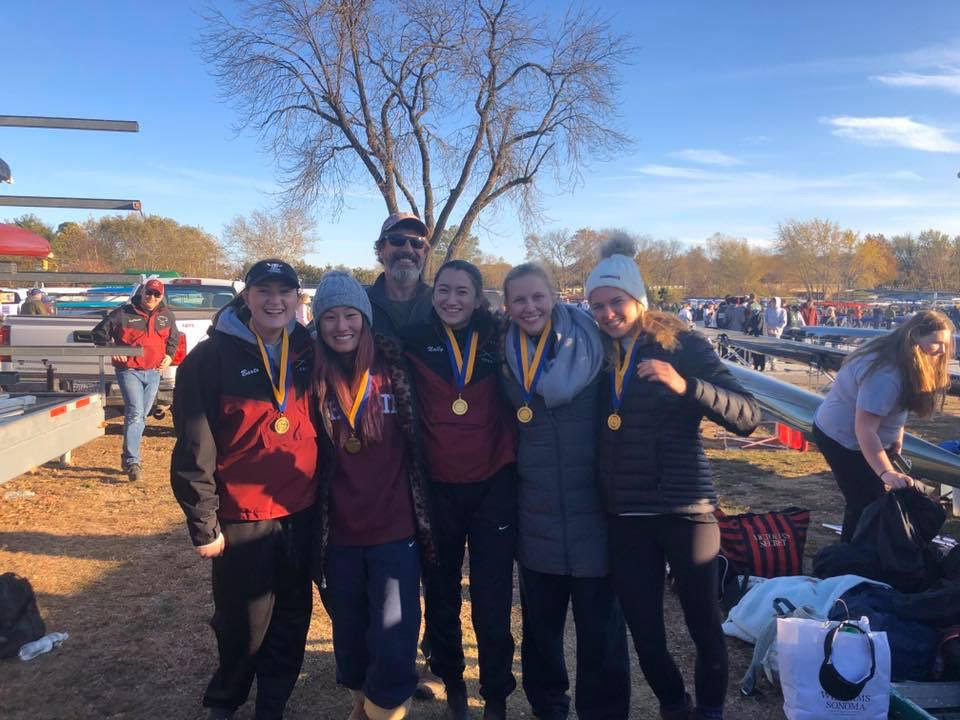 Club crew has moved to indoor training and will return to action in April. (Photo courtesy of Anna Coffer ’21).

The Lafayette club crew team competed in the Frostbite Regatta last weekend, with both the women’s novice-4 and the women’s varsity-4 boats winning their respective races.

The women raced three varsity boats, with the ‘A’ boat taking home first place in 8:13.57, ahead of boats from La Salle, Jefferson, Binghamton and Manhattan. Sophomores Haley Simpson, Maddie Barto, Sherry Deng and Libby Mayer were the rowers in the boat, which was led by sophomore coxswain Erika Nally.

“As a very young varsity boat made entirely of sophomore rowers, we still have a lot to work towards, especially because we compete against scholarship athletes and rowers with years of experience,” Nally said. “But the results we saw this past weekend gave us a glimpse of where we stand in relation to other teams, right before we move into indoor training.”

“I think they rowed up to their potential,” head coach Richard Kelliher said. “With both teams medaling, it shows that the women’s program is on track for an extremely successful spring.”

“The men’s program did well, they got second,” Kelliher said. “They were beat by Lehigh, that’s a race the varsity men should’ve won.”

The men’s novice-4 boat placed second out of six teams in their race, finishing in 7:51.25. Freshman Becca Wilts was the coxswain, with sophomore Jon Davis, and freshmen Jacob Mina, Evan Flint and Ian Miller as the rowers.

The varsity women’s ‘B’ and ‘C’ boats finished second and fourth, respectively, in their races. In the ‘B’ boat were sophomores Anna Coffer, Kendall Rothfus and Gillian MacDonald, and juniors Grace Anthony and Molly LaPoint, the coxswain. In the ‘C’ boat were freshman Arden Westphalen, sophomores Emily Ross and Hannah Spitzer, junior Julia McSpirit-Beckett, and freshman coxswain Louisa Rose.

“I would say that the effort from all the rowers was really spot on,” Kelliher said. “They had a hard two weeks leading up to the race academically so the athletes were tired. They have been working just as hard outside of practice as they have been at practice. I think going to the regatta and doing as well as they did shows how tough of a team they are.”

“The goal of indoor training is to put in a lot of work individually, so we see results when we get back onto the water, which occurs sometime around spring break,” she added. “Collectively as a boat, we can improve through better timing. To make any boat move the most efficiently through the water, each rower needs to be perfectly in sync with one another, so by fine tuning our stroke, we will see improvement and increase boat speed.”

The team will return to action in April following their indoor training during the winter.