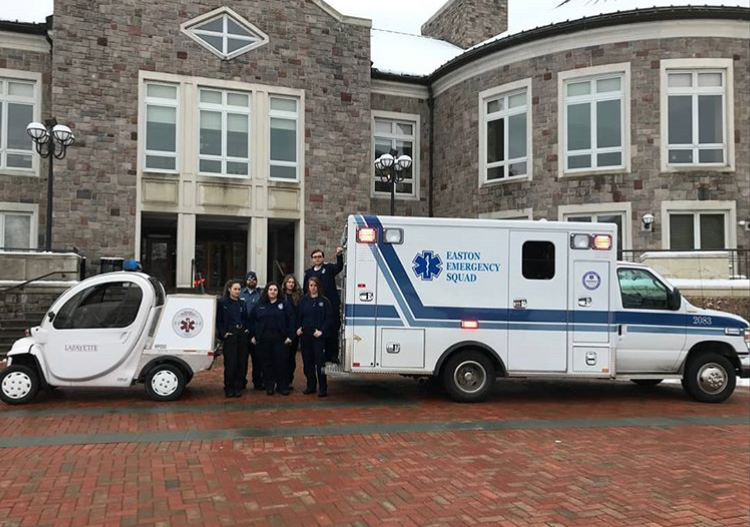 The Lafayette Emergency Medical Services (LCEMS) club kicked off National Collegiate EMS (NCEMS) Week with Coffee and Compressions, in which Lafayette students got a chance to learn hands-only CPR in exchange for a free cup of coffee. The event is consistent with one of LCEMS’s major stated goals which they have been pursuing since the club’s creation last semester: getting half the student body CPR-certified.

“Knowing CPR is such an important skill to have, and the certification is very easily attainable,” said Madison Cass ‘22, the Co-Public Relations and Marketing Chair of LCEMS.

Coffee and Compressions was just one program among many that LCEMS planned for NCEMS Week, an annual recognition of college EMS organizations. On Tuesday and Thursday, the group hosted medical trivia. Students answered questions that ranged in subject from CPR to protocols for urgent medical situations in exchange for a free LCEMS pen. Wednesday, students were given the opportunity to make their own first aid kits.

To finish the week’s events, two LCEMS board members will be holding a panel about alcohol awareness on Friday. The panel will not be about alcohol abstinence, according to Cass, but will instead focus on the necessary procedures to take when you are concerned about a friend who has been drinking.

“I am especially excited for this event,” Cass says. “I think most students on campus do not really know what to look for in intoxication situations where the student’s life could be [in] jeopardy.”

Since Lafayette’s student body has experienced its own alcohol-related death within the last two years, the conversation around responsible drinking has continued to be crucial.

Over the last year, LCEMS’s influence has extended well beyond NCEMS Week. LCEMS is a subsidiary of the Easton Emergency Squad, and is a student-run EMS squad that provides Quick Response Service (QRS) on the weekends from 6PM on Friday to 6AM on Monday.

According to Rachael Broder ‘20, president of LCEMS, they respond to any medical emergencies on campus by providing patient care until an ambulance is able to transport the student to the hospital.

Although it normally takes an ambulance eight minutes to get to campus after receiving a call, LCEMS only needs around four minutes to reach a patient. Halving the time that a patient is not receiving medical care can mean the difference between life and death, which is why members of LCEMS find NCEMS week so important.

“This week is a great way for students to become more familiar with who we are and what we do,” Broder said. “In the case that they ever need us, there is already an existing level of familiarity and trust.”

Cass also noted that not all Lafayette students know about LCEMS.

“Many students approach me and ask about the vehicle that they see me drive around in on the weekends, unaware of what it’s for and why I’m in uniform,” Cass said. “If all the students knew our affiliation with the vehicle and our presence on campus, they would hopefully feel more comfortable calling for help if it is needed since someone familiar is responding to the call.”

In addition to providing important emergency medical services, LCEMS allows aspiring medical professionals at Lafayette to practice valuable medical skills. Broder, who wants to be a physician specializing in emergency medicine and trauma, says that LCEMS has given her experience with medical skills and patient interaction. Cass said she hopes to pursue a career in pediatrics and that being a part of LCEMS has added a layer of complexity to her passion for medicine.

“Practicing medicine is not only applying the science, but also being compassionate for your patients and showing you truly care for their mental and physical health,” Cass said. “Seeing someone in great pain or nearly die before you is very traumatic, but it is part of medicine, and if you want to go into this field, you must understand that death and pain is an unavoidable aspect.”