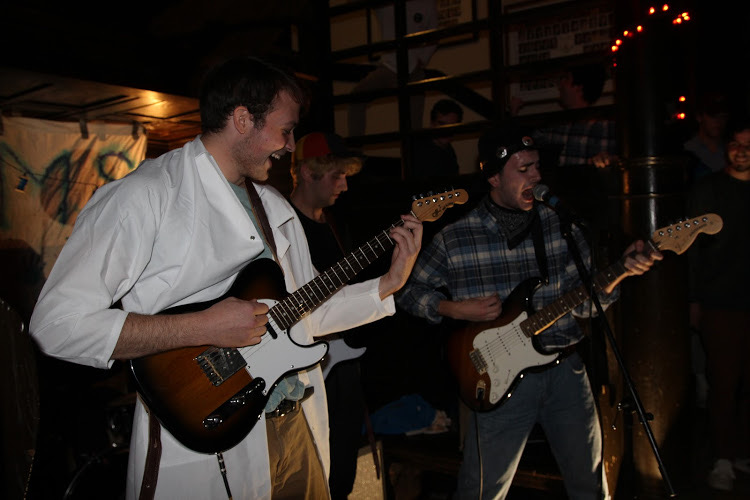 An affinity for melody and rhythm has guided Calvin Sharp’s life since a young age, and he has spent his years at Lafayette making this love for music and performance tangible for the broader college community.

“I’ve always played music. I really liked it when I was a little kid, so I wanted to play guitar when I was younger,” Sharp ’21 said. “So when I was in sixth grade to sophomore year of high school, I was taking lessons and playing shows.”

While Sharp was in high school, he and his friends got together to write and record their own music, which led to the creation of his high school band, Petty Walker.

“In high school my friends started having shows at their house…[and] I got a little band together and started playing there. We played a little bit around when we could. [We] wrote our own stuff, recorded it and all that.”

Sharp is still currently part of Petty Walker as well as another music group on campus, The Bison Boys, and is also the founder of the new music club, Lafayette Interdisciplinary Musical Society (LIMS).

While Sharp is not a traditional music major, his involvement spans throughout conventional and unconventional means of making music on campus.

“I still try to be involved: I am part of the radio station, I have had a show since I was a freshman, and now I am on the board helping to do that. I am running the podcast studio there, trying to make it more of a rehearsal space,” he said. “I brought a drum kit from home, and I keep amps down there as well. So whenever someone is like ‘hey I just need a space to play music’….we have this room you can go in now.”

One of the goals Sharp set upon starting LIMS this year was to push more student-artists, like himself, to record and perform on campus.

“It was tough to have people on campus doing stuff, so the idea was so that we could do something that I kinda had in high school, which was just at my friends house and having parties, but they were just shows. Have it be an easier time for people here to perform, come out and see their friends perform, make posters and stuff like that.”

In terms of his own music, Sharp holds enjoying it and having other people enjoy it to the highest degree of consideration. Worrying about how many people he got to listen to his music made him “kinda go crazy. Right now, I am looking to have more fun with it because I like it.”

While Sharp says he draws some inspiration from the music he listens to, his end goal is to make his sound “more digestible, for people that don’t like the music I listen to as much…because I think more fun than anything is playing a show and everyone is having a good time at it. Rather than doing the super serious like ‘this is my creation’ and all that.”

Other sources of inspiration for his music comes from observations that interest him.

“Any little thing I pick up on or I like listening to or I see, I am always going to interject that kind of stuff into it rather than it being a purely emotional outlet.”

Sharp plans on establishing a permanent space for students to perform, so the importance of student musicians outlasts his presence on campus, he said.

“I think there are a lot of times where people will have fun at shows that I play even if they’re not really going to listen to the music I make. And that’s really okay with me because I like entertaining them even for that moment,” he said, adding “So like they’ll have fun and jump around and stuff, and they’re not necessarily going to go back and listen to it, but even if they’re gonna have fun that’s good enough for me.”

His club, LIMS, has a series of live performances coming up throughout the year.