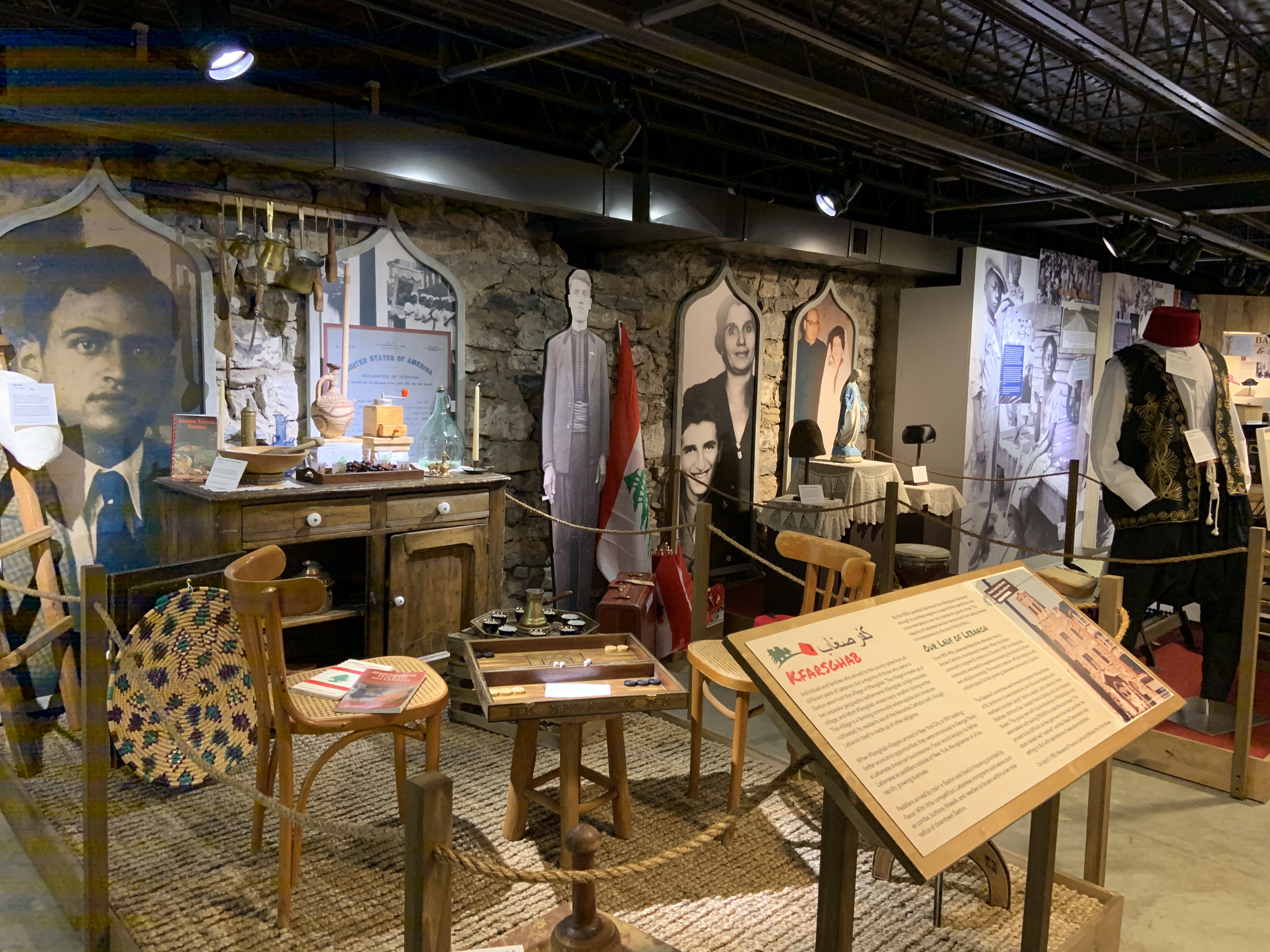 The exhibition ‘Destination Northampton County’ currently displays the lives and stories of Lebanese immigrants as well as other communities in the area. (Photo by Katie Frost ’22)

How would it feel to arrive in Philadelphia all alone in the year 1901? What would it be like to migrate from the South to Easton, Pennsylvania in the midst of Jim Crow America? At the Easton Sigal Museum, just a short walk from campus, visitors can immerse themselves in these experiences and many others through the museum’s new exhibition, “Destination Northampton County.”

The exhibition, which was three years in the making, opened to the community last Saturday, November 9. It features stories from people who have lived in the county throughout history, with a focus on communities including immigrants, African Americans, and Jewish Americans.

For curator Brittany Merriam and assistant curator Jean Bemesderfer, the exhibition is a way to represent traditionally marginalized communities, portraying Northampton County’s past in a more truthful, well-rounded manner.

“[The exhibition] marks the beginning of change for us,” Merriam said.

Upon stepping off the elevator at the exhibit, located in the lower level of the building, visitors are greeted with the sights, sounds, and smells of Philadelphia’s Washington Avenue Immigration Station. Immigrant stories, such as those of the displaced Palatine Germans who today are known as the “Pennsylvania Dutch” and Irish immigrants escaping the Great Famine, hang around the walls. Displays of suitcases, artifacts, and photographs give an idea as to what the immigrant experience may have been like.

Upon entering a larger room, the exhibition turns its focus to specific communities within Northampton County throughout history.

One section of the exhibition is about the Lebanese community, which Merriam said is “rich, particularly, here in Easton.”

The exhibition features a traditional Lebanese household setup with information about some of their traditions including the Lebanese Heritage Day festival.

Another section of the exhibition is about the Jewish story in Northampton County, which according to its sign, began during the country’s founding in 1752. The sign explained that by the late eighteenth century, five out of seven stores in Easton were owned by Jewish Americans.

Another important feature of the exhibition is its emphasis on African American contributions to Northampton County in the twentieth century. A sign explains that many African Americans came to Northampton County from the South during the Great Migration, often to work in industrial low-paying jobs such as Bethlehem Steel, but they were excluded from certain kinds of industry and economic classes.

Merriam and Bemesderfer stressed that the exhibition is not only about immigration, however.

“You have to be extremely careful about lumping [African American communities] into a story of immigration and so we were extra diligent about making sure that it was made clear that there was an understanding that that particular story did not go that way,” Bemesderfer said.

“Inherently, [the exhibition] is about community,” Merriam emphasized.

In the back of the exhibition, a title on the wall states “Northampton County is my home.” Mirrors line the walls as if encouraging visitors to reflect on their own place within the community.

Bemesderfer explained that when the space in the lower level of the museum originally became available, Merriam generated a survey for the community about what they would like the space to be.

“Overwhelmingly, and to nobody’s surprise, it was ‘we would like to see some diversity’ and so that was the moment that really hit the ground running,” Bemesderfer said.

“It was a balance between showing up and inviting people in, and it’s a delicate dance to do that. We can announce to the world ‘we’re a safe space now’ but not everybody’s going to feel that way,” Bemesderfer added.

Ambassadors of the different communities represented in the exhibition assisted the curators in facilitating conversation between the group members and the museum in a more authentic way, Merriam said.

According to Merriam and Bemesderfer, the exhibition has received positive feedback so far as well as “lots of tears” and a visit from a family of 60 who came to see their community represented in the museum and as a part of Easton’s history.

“People are so proud to be seen, and they should be,” Bemesderfer added.

Bemesderfer then expressed her hopes for Lafayette students visiting the museum.

“Lafayette students, prior to this exhibit opening, have been maybe some of our loudest critics…step one is done, and ideally a Lafayette student will [now] come in and feel like we are actually representing the county as a whole,” Bemesderfer said.

Merriam added that she hopes that students will relate the things they learned to their own hometown communities.

“Local history is as big or small as you want it to be,” Merriam said.