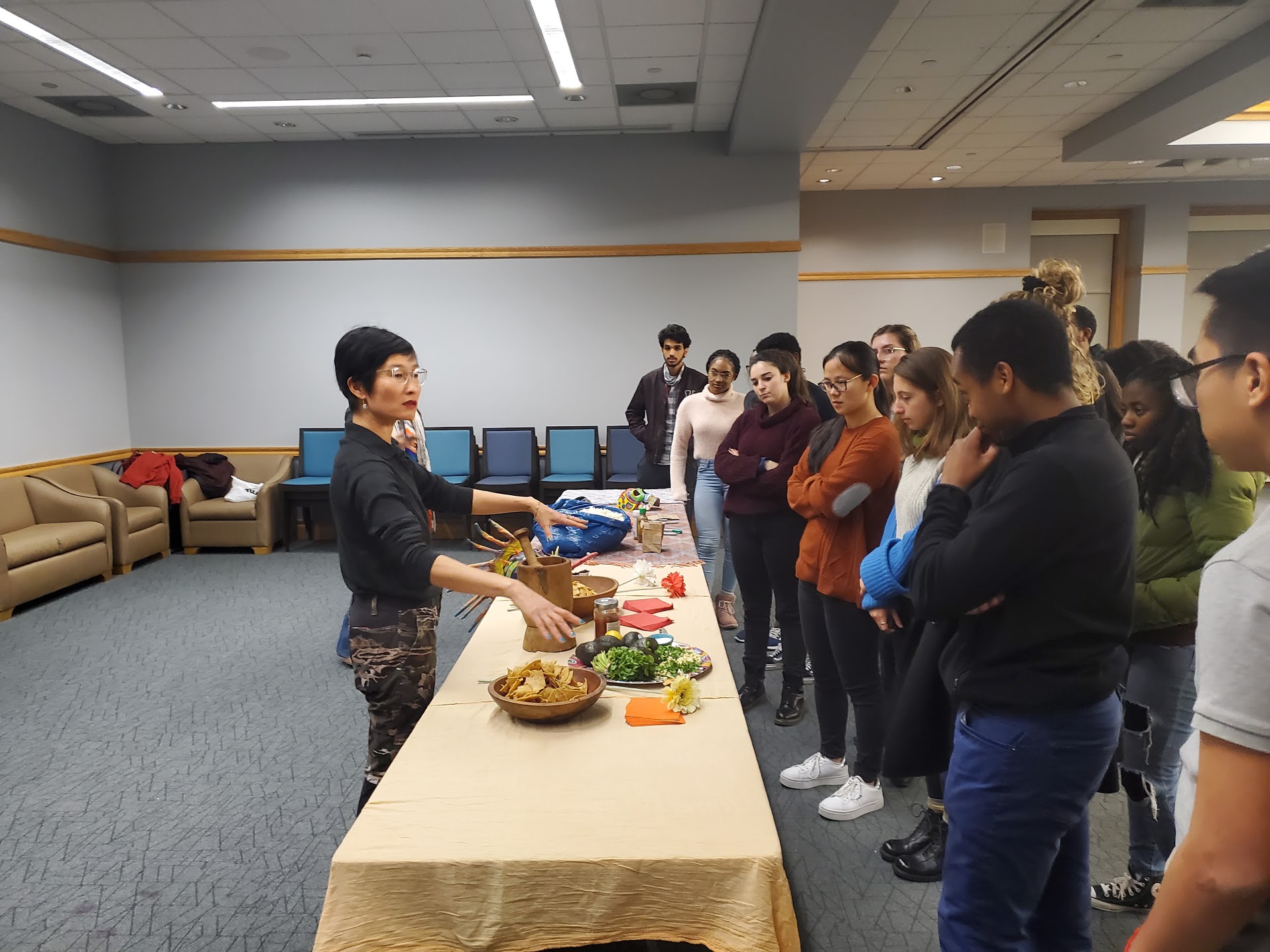 International Student Association (ISA) hosted the event ‘I Am Not Your Immigrant’ which included various interactive activities such as cooking and painting. (Photo by Myles Wolf ’23)

The “I am not your immigrant” event was an experience that led its participants to engage with all their five senses in order to address the subject of identity and stereotypes through playing music, cooking, painting and communicating with one another.

This event was part of International Education Week, a chain of different activities hosted by International Students Association (ISA). Participants included members of ISA as well as other individuals from different parts of the country and the world.

At the beginning of the event, students picked an instrument from the center of the room and sat in a semicircle around founder of InspireCorps Stephanie Thompson, a company whose mission is to achieve love through “artist-led workshops for both children and adults that offer crucial self-expression via all arts genres,” according to their website.

After giving a short introduction about how people across cultures can connect and communicate through a variety of different means, Thompson instructed audience members to pick up their instrument and be “who you are as you play.”

The students then played their bongos, tambourines, maracas, castanets, bells and more, to create an international orchestra.

“I don’t play well alone, but together there is harmony,” Khalid Al-Motaery ’23 said.

“We are all hearing each other,” Thompson added.

Sung Uni Lee (Uni), a chef with 20 years of experience, also led a short discussion about ingredients and foods that were common across different cultures of the world such as popcorn, cinnamon and wheat.

After the discussion, students wrote messages to themselves on popcorn bags and grounded avocados into guacamole. After learning about these subtle similarities across cultures, people tasted the food and socialized for a short time.

Following the event, Uni said that she wishes to remind college students to “not overthink everything” and to remember “to listen to their emotions.” Uni touched upon the idea that certain aspects of life such as tasting or making food, cannot be fully described with words.

Finally, artist and activist Gabriel Rivera led a discussion that engaged viewers on a visual level. Students gathered around Rivera as he proceeded to throw the paint from a brush onto a large canvas while exclaiming “I am not your immigrant.”

He followed this performative act with a short speech detailing a proclamation of his own identity and a rejection of those who have attempted to devalue him or others through hate speech or other anti-immigration sentiments.

He then instructed viewers to “look at the person next to you” in order to acknowledge oneself and those around them before inviting people in front of the group to throw paint, of their chosen color, onto the canvas as they proclaim something of their own.

By throwing paint, Rivera said he wanted participants to “question their perceptions of things” and understand the importance of acknowledging the human struggle, while still remaining human.

To end International Education Week, ISA is hosting two events today: a lunchtime talk with International Affairs professor Caleb Gallemore, in the Rockwell Integrated Sciences Center, and “Evening at the Museum,” where students come look at artwork and paint their own pieces at 5:00 p.m. in Farinon.