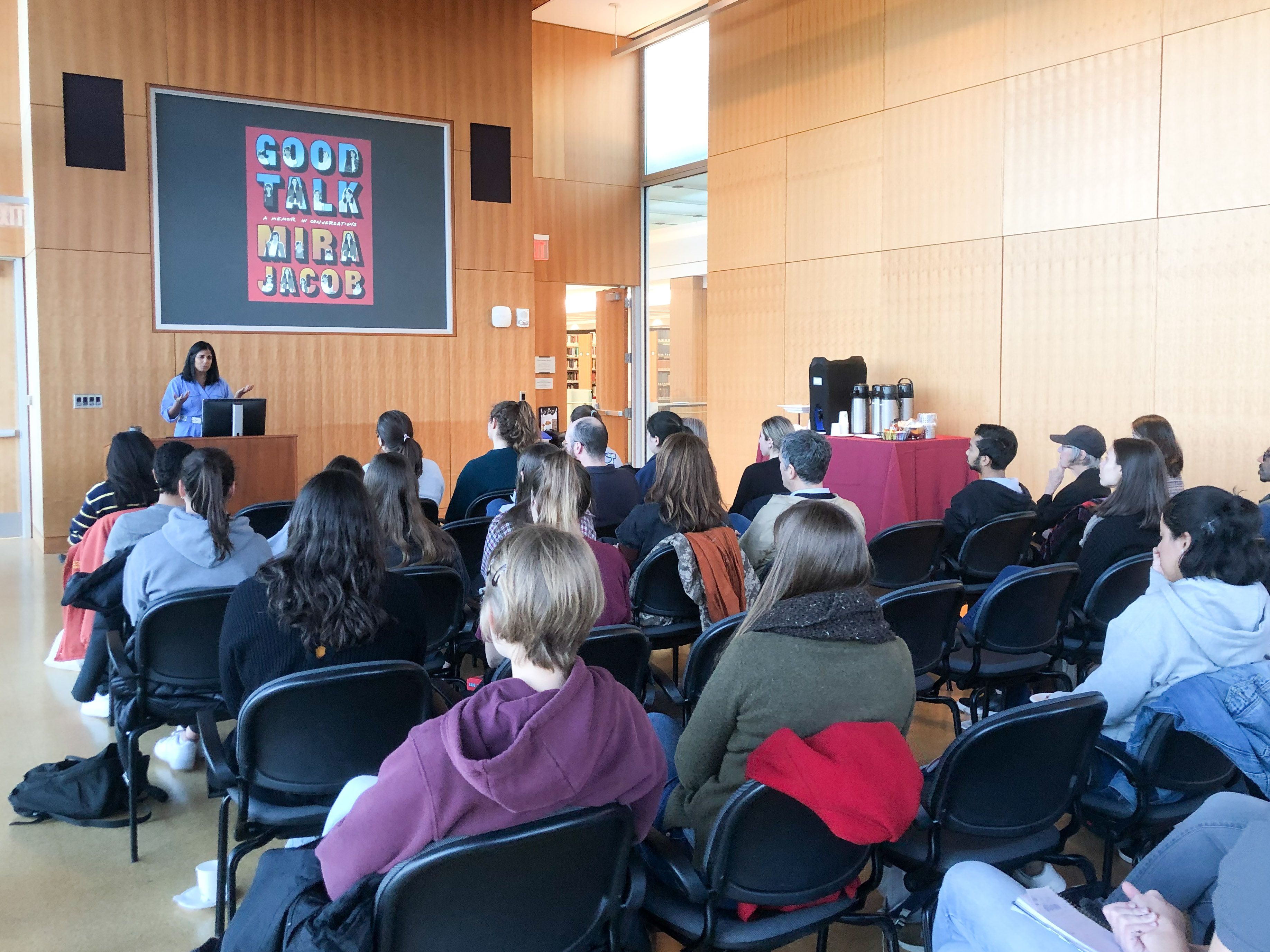 In her talk to the college, Mira Jacob read excerpts from her graphic novel ‘Good Talk: A Memoir in Conversations.’ (Photo by Brandon Marin ’22)

For author and illustrator Mira Jacob, answering her son’s questions about race led to much more than an informative family dinner — it inspired her 2019 graphic memoir “Good Talk: A Memoir in Conversations.”

Jacob spoke to the college about this memoir on Monday afternoon. She explained that as a woman of color with a biracial son, she always did her best to answer his “innocent” questions about race honestly, even when the answers were painful.

Jacob said that her son first saw himself represented in pictures of artists of color on album covers, so she used those CDs to cut out and arrange pictures of the two of them with dialogue. She said that she then sent these pictures to her friend, which led to a Buzzfeed article about her and Z, and finally the graphic memoir.

Jacob shared several scenes from the memoir, reading passages aloud while showing pictures from the book on the screen.

One of the stories she shared was about her teacher Ms. Morrell, who she said was very strict and only let students sharpen their pencils once a day. When Jacob won an essay contest for the Daughters of the American Revolution, writing about a hammer, Ms. Morrell drove her to the contest and they attended together.

After the event, Ms. Morrell told Jacob, “You are an American,” and said the same about Jacob’s parents, who, according to an interview with Jacob for “Shondaland,“ immigrated to the United States from India in 1968.

Jacob then asked the audience if they had ever participated in conversations that had kept them awake at night for years on end. She said that this conversation had been that for her. It is now a scene in her graphic memoir, and an important part of her story.

The memoir, which contains about forty stories, was condensed from eighty-four different stories that Jacob wrote about her conversations with her son, and other aspects of her life that informed those conversations. She explained that sometimes at readings people will expect her son, who has grown since she started writing several years ago, to still be the same innocent kid who asks a lot of questions.

She said that she tells him, “I’m just your mom. I don’t get to say who you are in this world. That’s entirely you.”

“Good Talk: A Memoir in Conversations,” will be available in the Skillman Library soon.