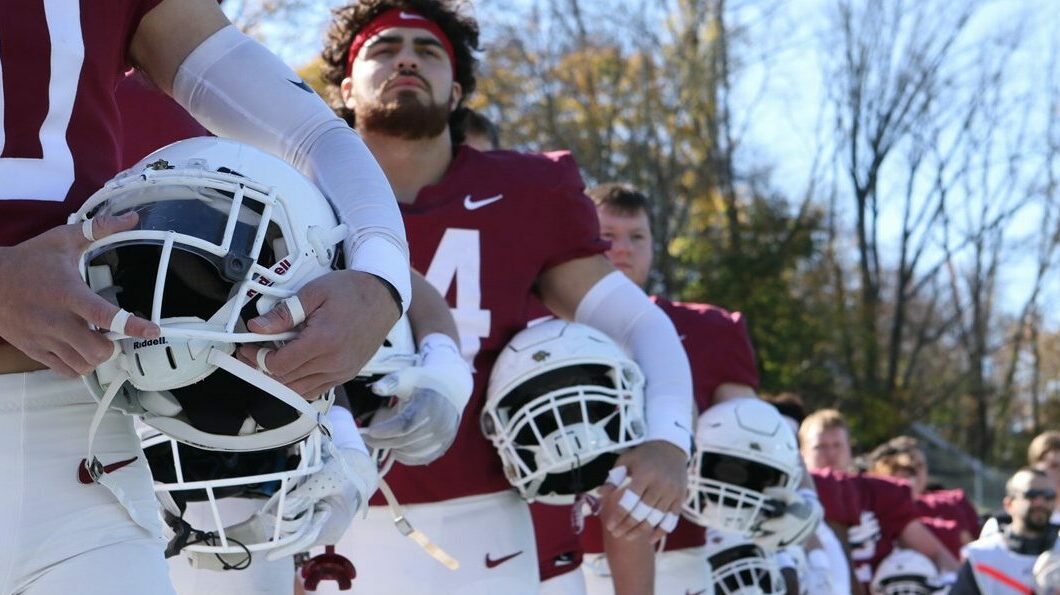 Football earned a win over Fordham to improve to 2-1 in the Patriot League. (Photo courtesy of Athletic Communications)

The Lafayette football team earned their second win of the season last Saturday over Fordham, 38-34. The Leopards are now third in the Patriot League with a 2-1 record after consecutive conference wins.

After Lafayette led 17-0 in the first quarter and 31-10 late in the third, Fordham went on a 24-0 run to take the lead with under four minutes remaining in the fourth quarter. The Leopards responded with a game-winning touchdown drive.

“We get to do this,” head coach John Garrett said. “We get to coach football and play football. And that’s why I do it. For games like that. It was an exciting game, it went back and forth.”

Down 34-31 and trailing for the first time in the game, freshman quarterback Keegan Shoemaker needed to engineer a scoring drive, and he did just that. Under pressure, he rolled to the right and threw a 42-yard pass to freshman wide receiver Jordan Hull to set up the chance to score. Garrett called the play the “key” to the scoring drive.

“We say all the time, the best way to regain the momentum is to execute,” he said. “And that’s what we concentrate on: how we play. So that’s the constant message since we’ve been here. Just execute ball plays. And they did.”

Two plays later, junior running back Selwyn Simpson broke a tackle and scored on a play many thought was over when the defender was on him. Simpson said running backs coach Wali Lundy is always working with him on using his off hand to keep balance, and which he did when spinning away from the defender.

“It was an outside zone call, it was actually a bad snap,” he said. “So I was actually the one to catch it, and I just heard Keegan [saying] ‘Go, go, go.’ I just tried to get outside to get some stretch. The line did a good job of really getting the stretch.”

Simpson scored two touchdowns on the day, and rushed for 102 yards, almost mirroring his two-touchdown, 114-yard performance in last season’s win over Fordham.

“I just think it’s that’s two good games in a row that I went and played well,” Simpson said. “And good games where coach Garrett trusted me in the run game. Whenever my team trusts me, I like to run hard, and I’ll try to make plays when we need them.”

Shoemaker finished with 309 yards on 17-33 passing with three touchdowns and two interceptions.

Sophomore tight end Zadok Scott recorded 160 receiving yards that day, with the team’s top three wide receivers, senior Nick Pearson, freshman Joe Gillette, and junior Quinn Revere all inactive. Scott broke free for a 91-yard touchdown reception in the third quarter, the Leopards’ only score in the second half before Simpson’s and the longest play from scrimmage for the team this season.

“We had the read,” Scott said of the play. “I looked in the middle of the field, and it was wide open. And I [thought], ‘I’m just gonna take it,’ so I just took off, went through the middle, and [Shoemaker] saw me luckily, so got me the ball, and he was gonna have some space on it. So I just knew I had to get the ball [in] my hands [and] make sure I made the catch and then run with it.”

Scott appeared to be losing ground on the defense, before cutting to the right side where he saw he had blockers. His six receptions and 160 yards paced the Leopards’ offense against Fordham.

“It would be pretty wise for us to keep playing [Scott even when the other receivers are healthy],” Garrett said. “So we believe that he is a guy that can help us. He has continued to develop his game and develop a real good understanding of the offense.”

The defense also contributed to the win, stopping Fordham on eight of their 14 third downs and both of their fourth down attempts. Junior linebacker Major Jordan registered a game-high 11 tackles, and freshman linebacker Marco Olivas added nine tackles and a fumble recovery on a loose ball forced by sophomore linebacker Billy Shaeffer. Olivas and Jordan each recorded a sack and two tackles for loss as well.

“We’re really proud of the defense,” Garrett said. “They had to battle and battle and battle, and when the offense is throwing all those strikes to get back in the game, it’s hard to stop them all. But they really played well. We set out to stop the run, and that’s one of the top rushing teams in the nation. We held them to 68 yards on 30 carries. That’s phenomenal.”

The Leopards will face Holy Cross, who are first in the Patriot League with a 3-0 record, tomorrow in Worcester, Mass. at noon.