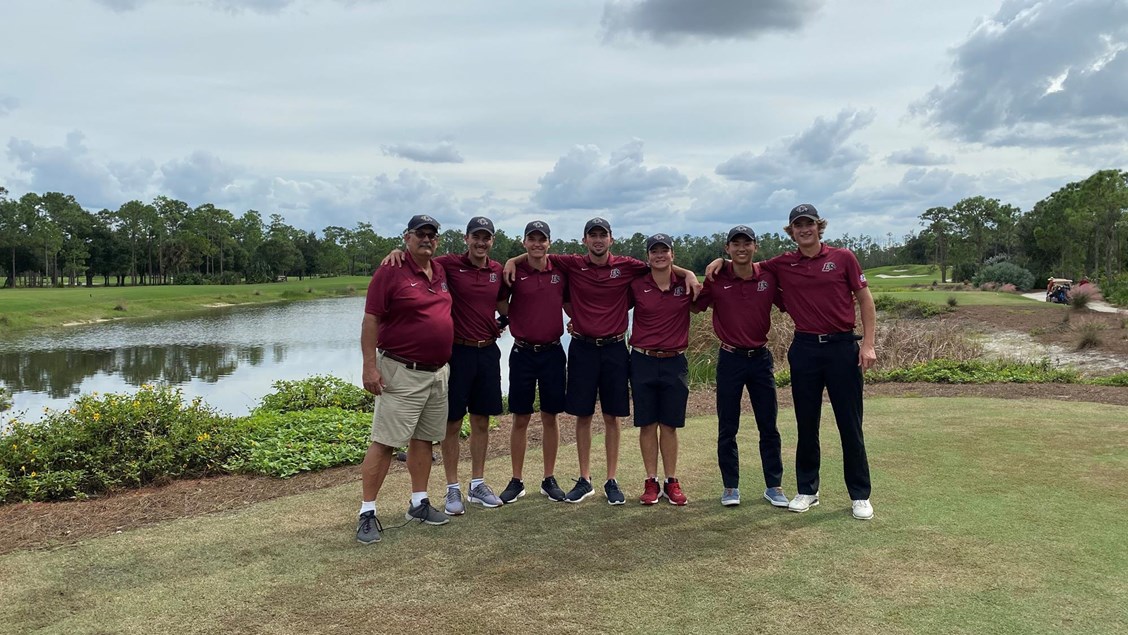 Senior Will Halamandaris (third to right) tied for first as golf tied for fifth overall. (Photo courtesy of Athletic Communications)

Senior Will Halamandaris finished in a three-way tie for first place at the Florida Gulf Coast University (FGCU) Classic last weekend, regaining his stroke which helped him win the Patriot League men’s golf title in April.

In their final match of the fall season, the Lafayette golf team tied for fifth place out of eight teams at the FGCU Classic and shot a combined 897 over three rounds.

“As a whole I think we came together the last day and really played well,” head coach Jim Hutnik said. “It showed what we’re capable of doing…we got some players where it finally all connected…we played a very difficult course and played it well. It sets the tone for the spring [season].”

Halamandaris tied for first in the 46-player field after shooting four-under par with a final score of 212 at the par-72 Old Corkscrew Golf Club. His best round was his last, as he scored a 69 and birdied four of the final nine holes. Halamandaris was ultimately eliminated in a three-way playoff race for medalist honors, but shot his best rounds of the fall season in the FGCU Classic.

Halamandaris suffered a bad ankle sprain in September and missed over a month of action as he rehabbed his injury. After being cleared to play in late October, it took Halamandaris some time to regain his confidence on the course.

“You have to have a lot of endurance and perseverance coming back from injury because there’s just some things that don’t feel right,” Halamandaris said. “It’s hard to be able to trust your body and trust your swing again, and it can be really trying, really frustrating.”

For Halamandaris, who was named the Patriot League Player of the Year after the spring season, the tournament represented a return to form in some aspects.

“I’m really happy for [Halamandaris] because when you’re used to playing at a certain level, and you kind of lose it for a while, it can be very frustrating,” Hutnik said. “So I’m glad to see he’s got the confidence back and hopefully he can carry it over in the spring.”

Sophomore Ryan Tall finished in a tie for ninth place after his final round score of 69 matched Halamandaris’ team-best score. Sophomore Drew Steiner was just behind in 12th place, shooting a 212 through the three rounds.

Sophomore Kazuki Osawa tied for 27th, junior Brendan Cronin tied for 31st, and freshman Martin Vanhaelst placed 35th to round out the Leopard performances at the Classic.

The team now turns their focus to the 2020 spring season, which will begin in late March or early April.