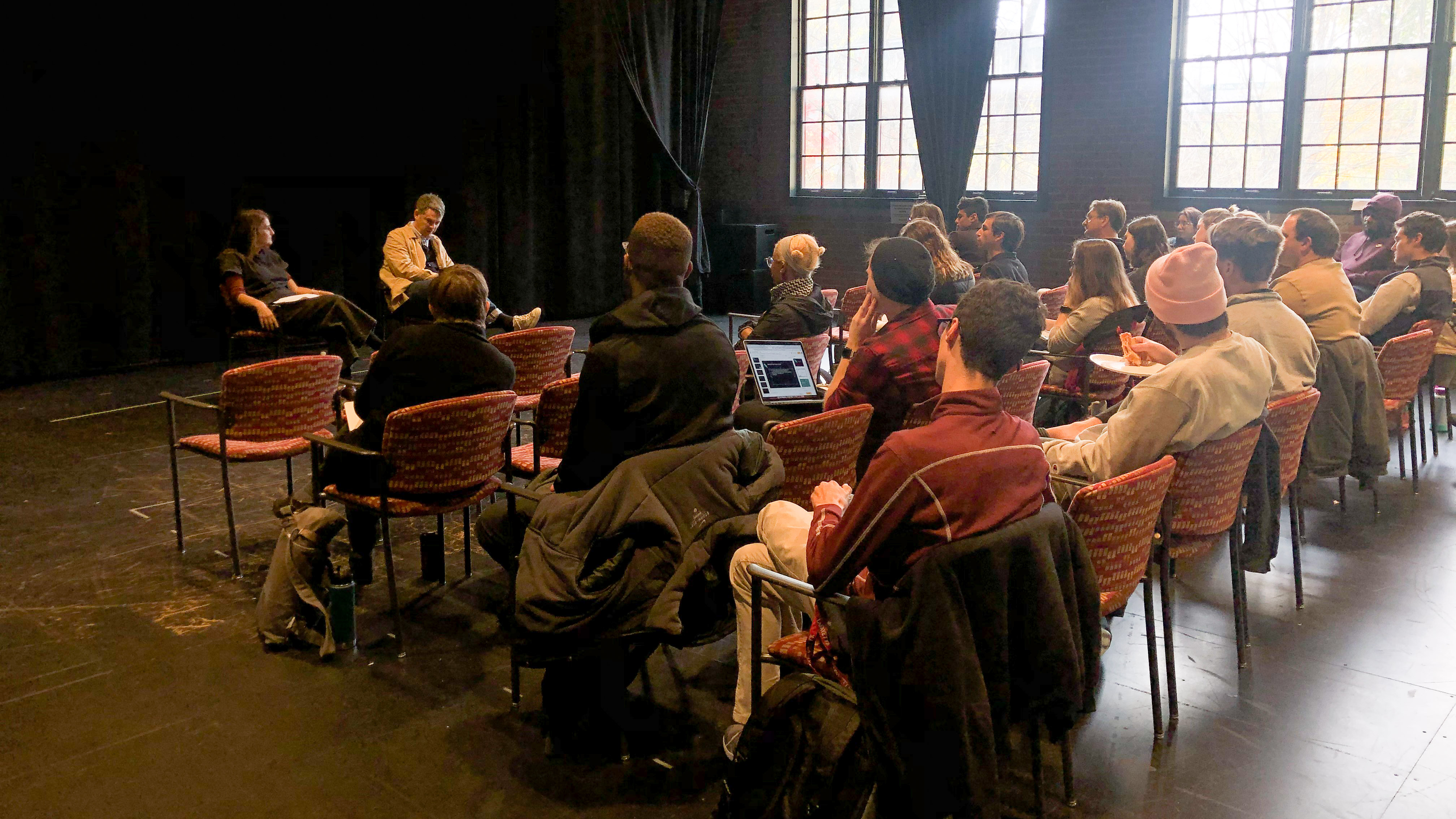 Mark Forier answered questions from audience members about his background in creative writing and gave advice on allowing writers’ own voices to come out. (Photo by Brandon Marin ’22)

For screenwriter and fiction writer Mark Poirier, understanding characters before developing any sort of story premise is the key to his creative writing process.

This past Monday, Poirier spoke to students and faculty about his experience in the film industry.

The campus-wide discussion was in a Q&A format moderated by English professor Jennifer Gilmore, who previously taught with Poirier at Harvard University. Prior to the talk, Poirier spoke to Gilmore’s screenwriting class.

Poirier shared with the audience that he was originally a chemistry major in college until switching to English at the last minute. He took his first fiction writing class in graduate school. After years of writing fiction, he received his first screenwriting fellowship ten years after graduating from college. The first screenplay Poirier wrote was made into a movie.

One audience member asked Poirier about how he writes about characters that are so different from himself.

Poirier responded saying that he comes up with his projects by first thinking of a character as opposed to a premise or concept. He said he lives with the characters in his head for a long time before bringing anything to life on page.

“I’ve kind of felt like an outsider all growing up because I was gay and in the closet so I observed…people a lot, and I had to know where I was safe, where I could go, where I couldn’t go, and I had to judge character, and so I think that that kind of got me thinking about character in an organic way, just because of survival,” Poirier said.

Poirier discussed the 2013 movie “Hateship Loveship” for which he wrote the screenplay, based off of the short story “Hateship, Friendship, Courtship, Loveship, Marriage” by Alice Munro. He chose the story because he was drawn to the story’s protagonist.

Poirier said that he wanted his film adaptation to remain “tonally close” to Munro’s short story. While the location and time period that the film takes place in was changed due to a request from Warner Bros., Poirier said he still wanted the “spirit of the story” to be there.

Poirier also advised the audience to stay true to their own voice while writing scripts.

“You have to sound like yourself. Your script could have only been written by you and that’s what will make it stand out…I think if people just allowed their own voice to come out, then they would do a lot better,” Poirier said.

Poirier stressed the difficulty of the film industry, saying that he has been trying to get one particular screenplay that he wrote with his partner made into a movie for nine years now, which he said was discouraging. Frustrations like this, he added, were why he has recently started directing, as he wanted to “see [his] films made.”

After the talk, Gilmore said that she always brings a guest to her screenwriting class because she writes screenplays and has friends that work in the industry.

“Mark in particular has been a teacher and he’s so in it and has had real success, so it’s a good combination I think for this group, because he can talk to students in a way that he gets the issues that we all have,” Gilmore said.