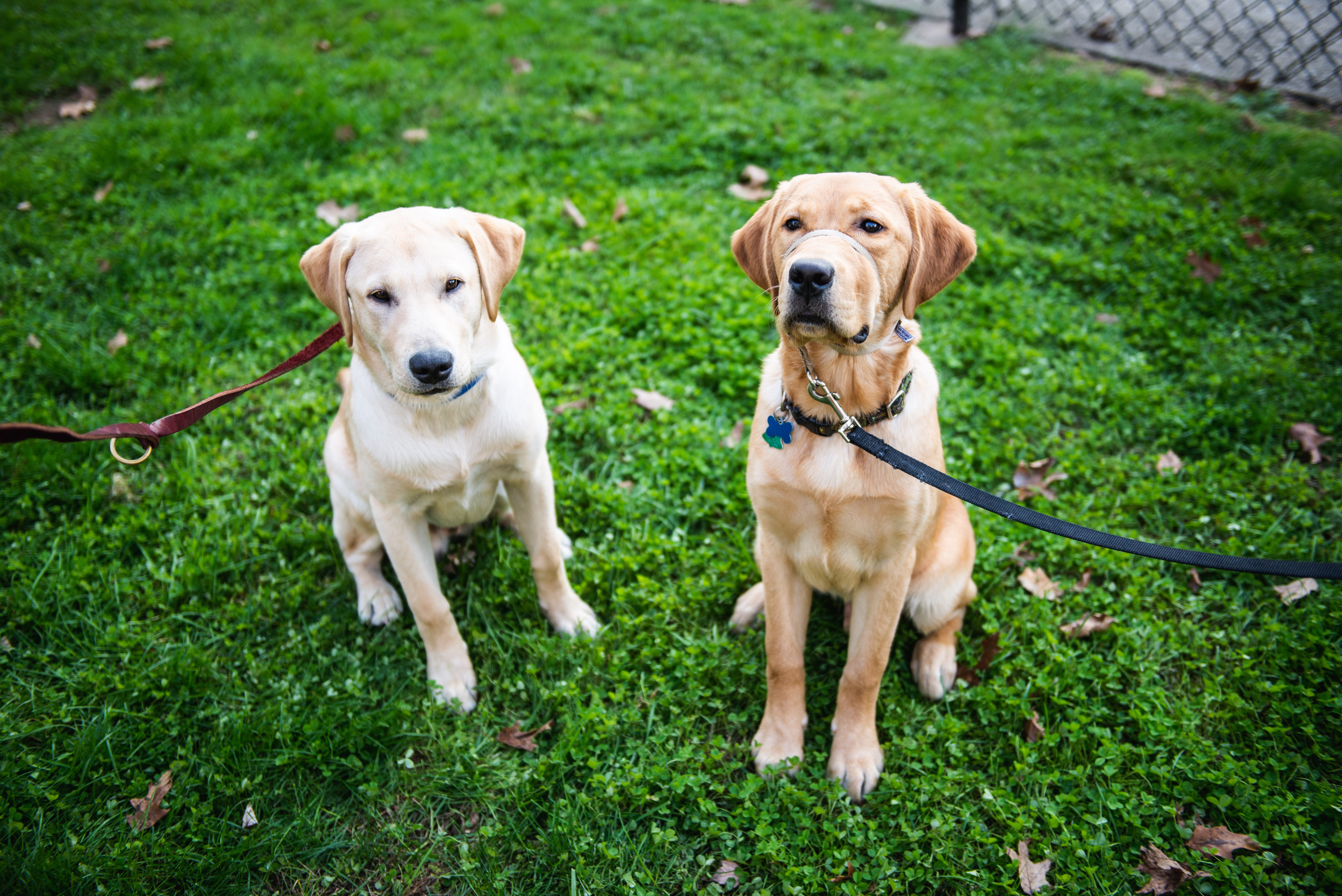 Frankie (left) and Woodford (right) will learn to open doors, drawers and turn on lights in the later stage of their training. (Photo by Brandon Marin ’22)

With Woodford’s “chill” vibes and Frankie’s “very high energy,” the Dog House is about to embark on a fun and interesting journey for the rest of this academic year.

Although their personalities may differ, this does not stop the pups from getting along and being friends, according to Dog House residents Erica Luing ‘20, Quinn Plante ‘21, Emily Newhall ‘22 and Thea Dekker ‘22.

Newhall and Dekker expressed their fondness for Woodford, because he is “good. Always good, except when he is bad.”

As for Frankie, he is quickly becoming known for his displays of affection.

“My favorite thing about Frankie is definitely how loving he is,” Luing later wrote in an email. “We’ve only had him a few days yet he’s already so attached and affectionate.”

Woodford and Frankie started training at eight weeks old with Canine Partners for Life (CPL), a non-profit organization in Cochranville, Penn., that trains puppies for service work through a variety of programs in the area, as well as aiming to “increase the independence and quality of life of individuals with physical, developmental, and cognitive disabilities or who are in other situations of need,” according to their website.

At the moment, Woodford and Frankie are familiar with basic training skills such as “sit down,” “wait” and “stand up,” Plante said.

This year marks the Dog House’s fourth year as a living learning community (LLC), and they have partnered with CPL since the beginning, Luing said.

Both CPL and the Dog House are looking to train the puppies with more advanced skills at the college than they would otherwise typically learn at kennel, Luing said, such as learning to open doors, drawers and turning on lights. Community training will last for the entire academic year before Woodford and Frankie head back to CPL for further training.

It may be irresistible to want to pet the many dogs that frequent campus, however, Plante said, there are rules that people need to be aware of before attempting to pet Woodford and Frankie.

“With these dogs, since they’re service dogs in training, they really can only be listening to whoever’s handling them,” he said. “Like, if [anyone outside the Dog House or trainers] were to be like ‘sit’ or something, that’s not allowed.”

Additionally, part of the dog’s socialization is learning how to behave like pets. Therefore, trainers “periodically” allow people to pet the dogs “as long as they’re sitting or looking at the handler. But when it’s like crowds of people, it’s just better for the dogs to not have to deal with all that interaction,” Plante added.

While students in the Dog House are still becoming accustomed to their two newest residents, they are quickly learning each dog’s quirks and personalities. Frankie, for example, has become quite fond of the “frog legs,” position, which is when dogs lay flat on their bellies and stretch their back legs behind them while relaxing.