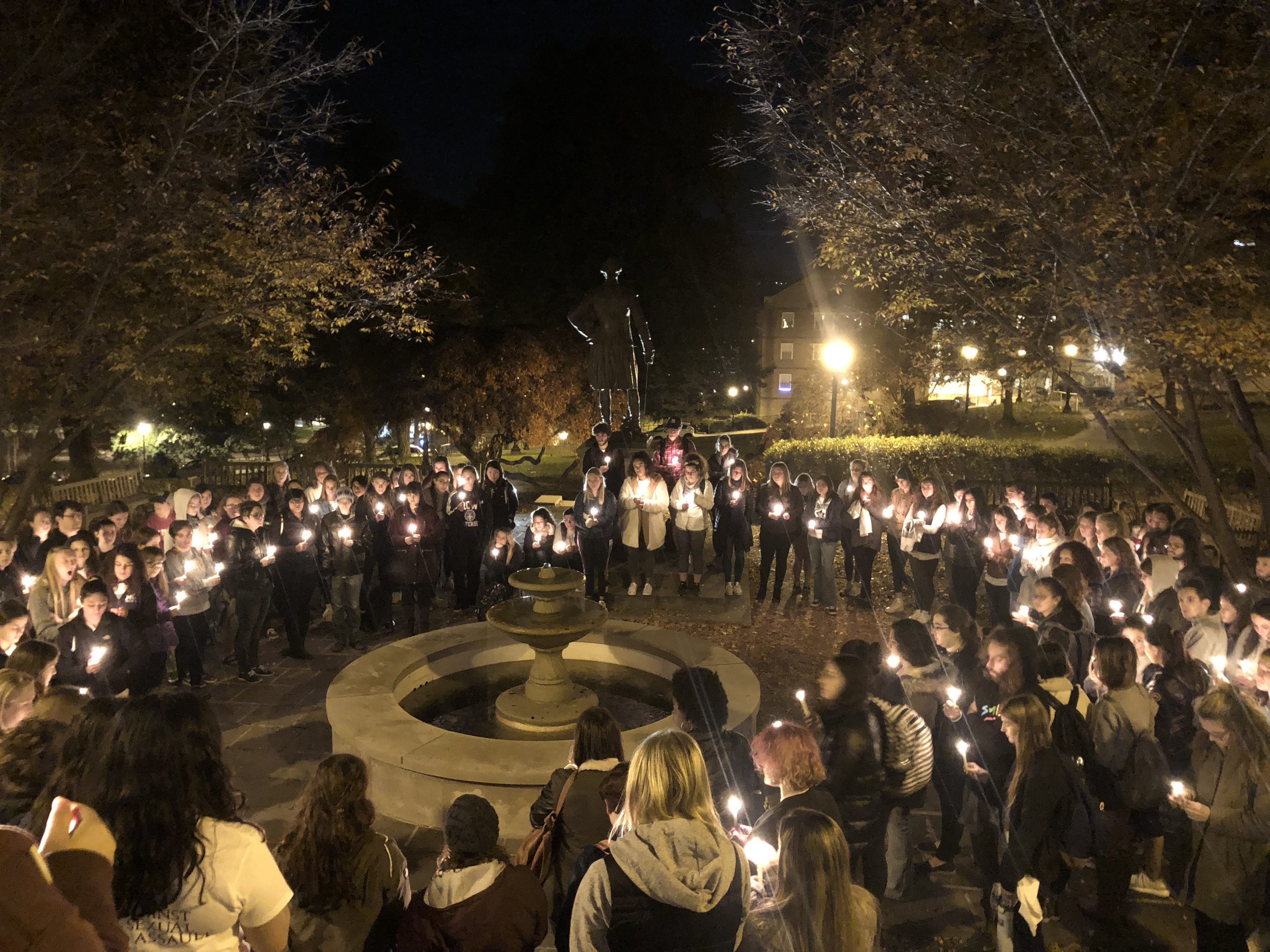 Last year’s Take Back the Night vigil was well attended by students from across campus. (Photo courtesy of Nahin Ferdousi ’19)

According to the Public Safety crime log, seven counts of sexual misconduct have been reported in the last 60 days. Three of these incidents are categorized as sexual assault, one as indecent assault, and three as rape.

All of these cases are still under active investigation by Public Safety, according to Public Safety Director Jeff Troxell. Of the seven reports, three were reported as happening on campus, two off campus, and two unknown. In an effort to support victims of sexual misconduct and prevent additional occurrences, Pards Against Sexual Assault (PASA) will be hosting the third annual Take Back the Night week starting next Monday.

“Even though reporting of sexual assaults is going up, there is not necessarily more cases of it, just more reports are coming in,” Troxell said.

Jessica Brown, Title IX Coordinator and Director of Educational Equity, said that the college’s policy and programming regarding sexual assault is constantly evolving.

“I think there has been a lot of progress in this area in the past year,” Brown said. “The Presidential Oversight Committee (POCSM) worked hard on proposed edits to Lafayette’s sexual misconduct and sexual harassment policies, which they were able to share with the community for feedback.”

PASA is a student group on campus that aims to provide support for survivors of sexual assault and organize programming that brings awareness and education to the topic.

“The women who founded the group saw a severe lack in support for survivors and programming that brings awareness and education on the topic,” said Ella Goodwin, President of PASA. “Since then, PASA has developed into the peer education and advocacy group that we are today.”

“One new thing we have started last semester and have continued this year is holding open policy forums where students can ask members of the administration questions about Lafayette’s policy and class conduct process,” she added.

The college website describes the goals of Take Back the Night as “[showing] support to survivors of sexual violence, [advocating] against sexual violence, and [strengthening] communities by speaking out about a serious, and often ignored, problem.” Events planned for the week include a rally and candlelight vigil, a clothesline hanging in Farinon and a 5K run, all leading up to a keynote speaker.

PASA plan to have a table in Farinon to hand out Take Back the Night shirts today, as well as Monday through Thursday of next week. The week begins on November 4th with the Clothesline Project, which is an international project founded in 1990. The mission of the Clothesline Project, according to their website, is “to educate students and the community that violence is a problem everywhere, help is available, there is hope and a path to healing.”

The clothesline is made up of t-shirts created by survivors or in honor of survivors who have experienced different forms of violence, with each color representing a different form. There will also be an anonymous form submission for those who may not feel comfortable creating their shirt in person.

PASA also has planned a 5K Run/Walk for Wednesday, November 6th, to show support for survivors and bring further awareness. Registration is due by 5pm and the run will start at 5:30pm on the steps outside of the Skillman Library.

“We definitely have a long way to go in terms of prevention,” Goodwin said. “Awareness of the issue is important only as a first step. We as a community have to follow through and work to change our attitudes and behaviors that are perpetuating the issue.”