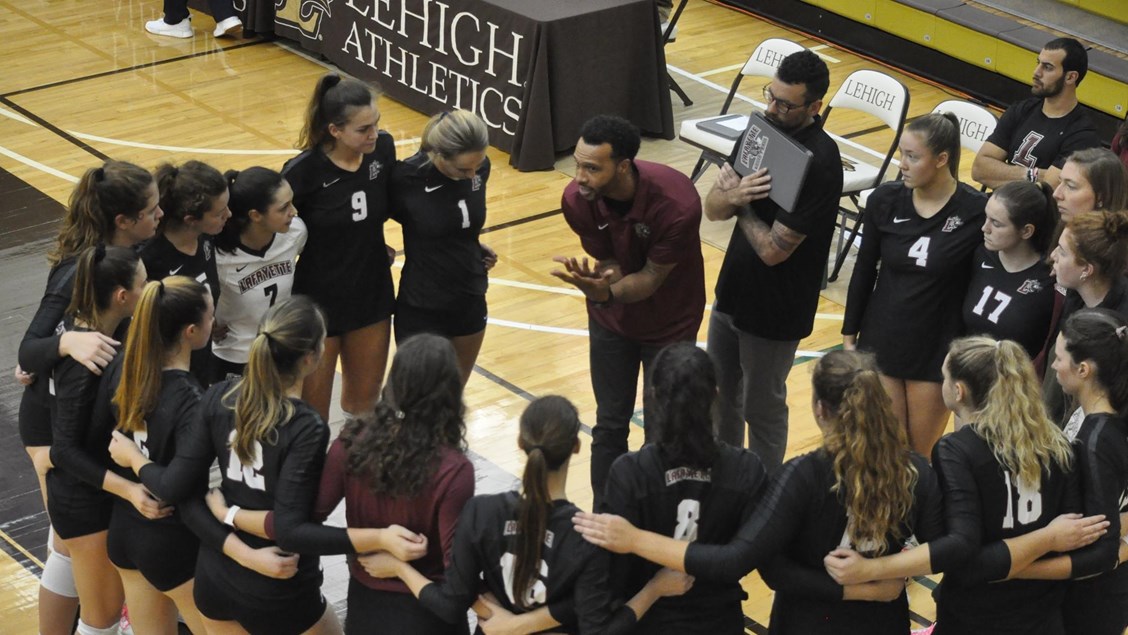 Volleyball earned their second conference win, but lost to Lehigh this past week. (Photo courtesy of Athletic Communications)

The Lafayette volleyball team was back in action last weekend, splitting a pair of conference games with a win over Bucknell and a loss to rival Lehigh. With seven games left in the season, all within the Patriot League, the Leopards hold a 13-12 record with a 2-7 mark in conference play.

After losing to Bucknell earlier this season, the Leopards flipped the script with a 3-1 win over the Bison. Lafayette lost the first set 25-19 before coming back to win three straight sets, 27-25, 25-18 and 25-15. Sophomore outside hitter Leanna Deegan tallied a season-high 23 kills to lead the offense, while fellow sophomore outside hitter Grace Tulevech recorded 12 kills, extending her streak of double-digit kills to nine games.

“I think we were really fired up to play Bucknell at home because we had improved a lot on many things we struggled with when we played them initially at Bucknell,” Tulevech said. “We were able to maintain a high level of energy throughout the game and minimize our own errors. Leanna Deegan also had a really good game and earned a lot of big kills which never fails to fire us all up.”

Deegan’s back-to-back kills clinched the second set for the Leopards after the score was tied at 25. Junior setter Jenna Bailey had 23 assists and 14 digs in the game, as well as a pair of aces. Senior setter Julia Howard matched Bailey with 14 digs and added 19 assists.

In addition to securing their second Patriot League victory of the season, the game also marked head coach Ryan Adams’ first win against his former team. Adams was an assistant coach at Bucknell from 2014-15 and then again in 2018.

“It’s fun to compete against a very good Bucknell team that I was part of building,” Adams wrote in an email. “They are having a fantastic year and it was amazing to come out on top while focusing on our side and our side only.”

Against Lehigh, the Leopards got off to a fast start with a 25-23 win in the first set, but dropped the following three sets 25-22, 26-24 and 25-15. Freshman outside hitter Ellie Carrera-Justiz notched back-to-back kills to clinch the first set, and finished with 16 kills and 19 digs on the afternoon. Tulevech recorded 15 kills, junior libero Audrey Mangum had 20 digs and four assists, and Howard added 29 assists.

“For us it’s not about rebounding [after the loss at Lehigh], it’s about moving forward and continuing to take advantage of every opportunity to grow, learn and improve. Moving into this weekend’s matches it’s more about us than our opponents,” Adams wrote. “We know we have the tools to compete at a high level, it’s all about implementing it in practice in the hopes that it can transfer into matches.”

The volleyball team can secure their best season since 2009 with one more win, a vast difference from last year’s team which finished 5-23 overall and lost all 16 conference games.

“As a team, we have shifted our focus entirely to ourselves rather than the other teams. We aren’t so focused on wins and losses or how good our opponent is,” Tulevech said. “I think our coaches have really made that the center of our program — win or loss, our focus is self-improvement.”