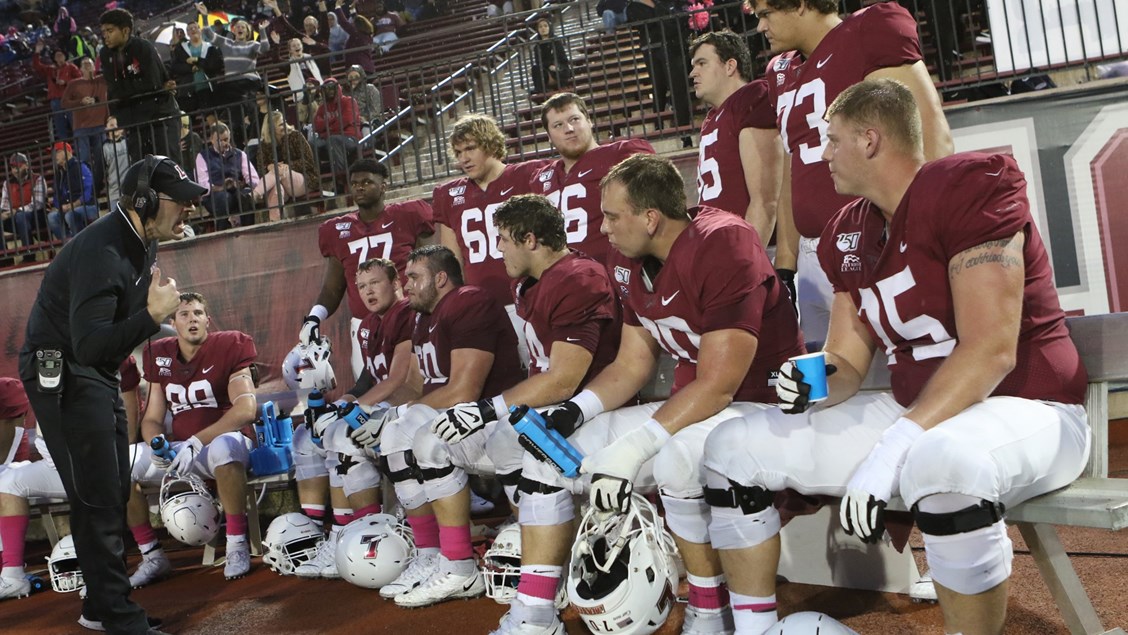 Football earned their first win of the season after a late comeback at home against Bucknell. (Photo courtesy of Athletic Communications)

Last Saturday, in their family weekend matchup, the Lafayette football team earned their first win of the season over Bucknell, 21-17. After trailing 17-7 heading into the fourth quarter, the Leopards scored two late touchdowns to complete the comeback.

“Well first of all it was just the gritty, come from behind, never stop believing, stay in the fight, keep punching attitude that our whole team had,” said head coach John Garrett. “And then execution ignites things…when we have this really good attention to detail and we’re executing at a high level, you know we can really do some things.”

Freshman quarterback Keegan Shoemaker kicked off the scoring for Lafayette with a five-yard touchdown run midway through the first quarter, opening up a 7-0 lead after an 11-play, 70-yard drive. The Bison responded with a score of their own just minutes later to tie the game, and then took the lead on another touchdown with just over three minutes remaining in the second quarter. The Leopards trailed at the halftime break, 14-7.

Both teams punted after their first drives of the third quarter, before the Bison advanced the ball to the Lafayette six-yard line after a six-play, 59-yard drive. The Leopard defense held strong, causing two incomplete passes and stonewalling the run game in order to force Bucknell to kick a field goal.

Down 10 in the fourth quarter, Lafayette put together a seven-play, 95-yard drive which ended with a 43-yard touchdown from Shoemaker to senior wide receiver Nick Pearson. The Leopards still trailed 17-14, with just over 11 minutes remaining.

On the ensuing drive, freshman linebacker Marco Olivas stripped the ball from a Bucknell receiver and senior defensive back Yasir Thomas recovered it. With optimal field position around the 50-yard line, the Leopard offense quickly earned a first down on a 10-yard run by Shoemaker. Consecutive runs by freshman running back Jaden Sutton got another first down for Lafayette before junior running back Selwyn Simpson found the end zone on a 22-yard rush down the sideline.

“With the run it was just a really good job by the offensive line,” Simpson said. “They all had really good blocks, open it up and I just trusted the path.”

The Lafayette defense stopped two additional drives by Bucknell to preserve the late lead, shutting out the Bison in the fourth quarter. Junior linebacker Major Jordan led the team with 14 tackles, which included 10 solo stops. Olivas had five tackles and two sacks, along with the late forced fumble. The Leopards limited Bucknell to just 287 yards of total offense, the team’s second lowest allowed all season.

“Defensively I was really just impressed with their ability to not allow a lot of big plays,” Garrett said. “[We] didn’t let any runs, maybe one or two, get out and then really made it hard for them in the second half and then the pass rush came up big.”

Shoemaker threw for 207 yards on an efficient 23-27 passing, a season-best 85% completion rate, with a touchdown and interception. Shoemaker was named the Patriot League Offensive Player of the Week award for his efforts against Bucknell, and currently ranks first in the conference in completions per game (19.4), passing yards per game (224.3) and total offense (247.6).