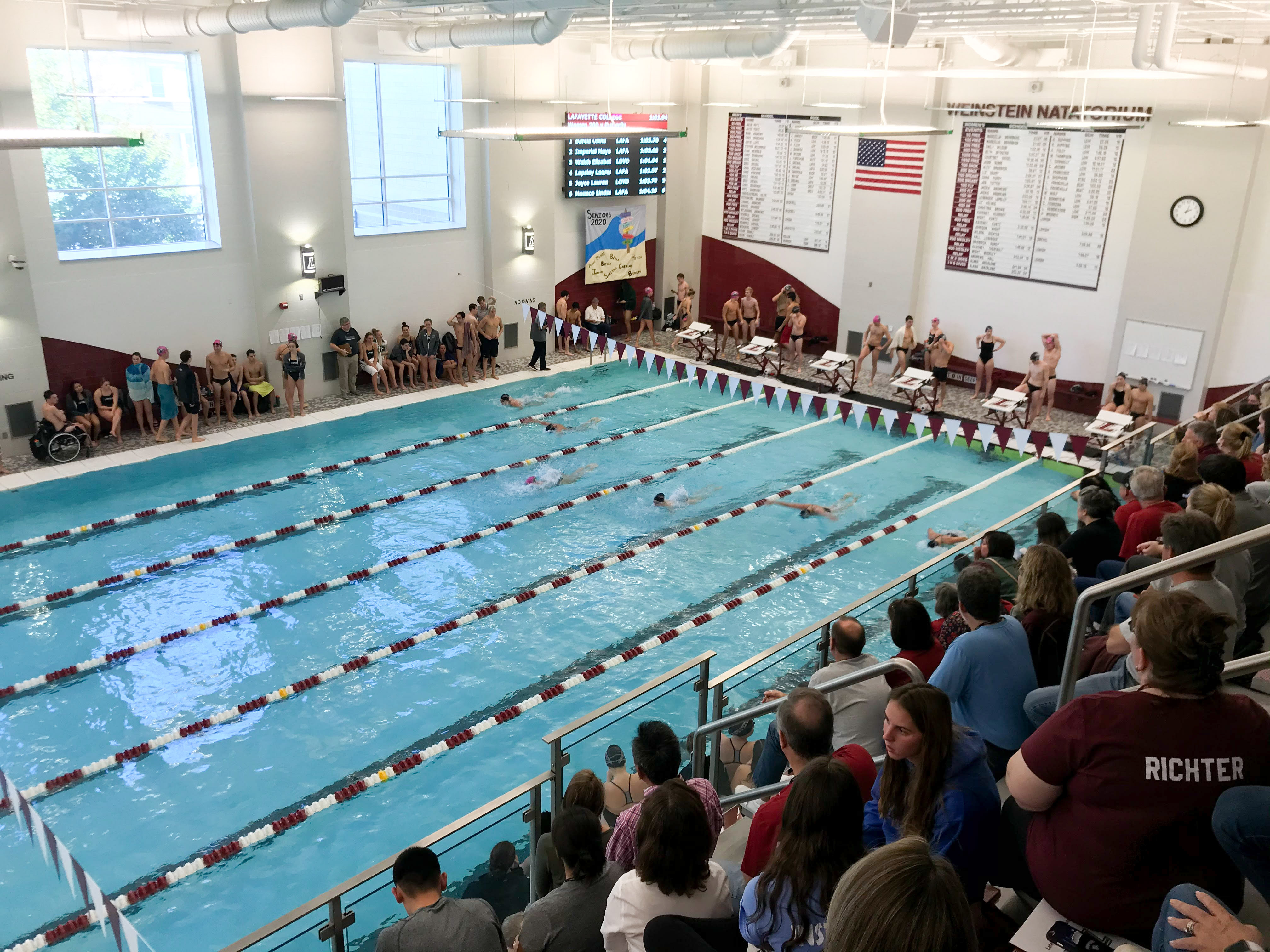 The swim and dive team honored eight seniors during their only home meet this fall. (Photo by Andrew Hollander ’21)

The Lafayette swim and dive team hosted Loyola Maryland for a conference matchup last weekend, and both the men’s and women’s teams lost despite combining to win 11 events. The women were outscored 195 to 102, while the men fell short 114.5 to Loyola’s 165.5.

“When we went down to Loyola last year, we were nowhere near as fast,” head coach James Dailey said. “Now this year, I think we could’ve done a little better in a couple of the same type events but overall I was very pleased with our performances.”

Dailey said this creates a “very different landscape” in the conference, given that some teams like Army and Navy receive full scholarship funding while others receive none.

The meet was the first and only home meet of the season for the Leopards, and the team honored their eight seniors who competed together for the last time in Weinstein Natatorium.

“The seniors are doing a really good job leading this year,” sophomore Justin Lloyd said. “[They’re] setting the tone for the season, making sure everyone’s on track, working hard and not slacking off…they’re running a tighter ship so the team atmosphere is a lot better.”

“It was good to see some improvement, but I definitely think I can do better later on in the season,” Lloyd said.

“I felt a lot better than I did last year [at Loyola],” Gorgan said. “I injured my knee over the summer but into this season the recovery process was pretty quick, and I got back on my feet.”

Sophomore Kyle Goodwill added another nine points to the Leopards’ total with his win in the 200-yard individual medley, finishing in 1:59.75. He scored another three points in the 200-yard freestyle, placing third.

Freshman Ethan Keyes placed second in both the 100 and 200-yard backstroke events, chipping in eight points for the Leopards.

“[The freshmen] have done a good job of coming in and working really hard and buying into the team culture,” Lloyd said. “If you have a good team chemistry, you’re going to do well in the pool.”

On the women’s side, freshman Sydney Perks won two events in her collegiate debut and added 18 points to Lafayette’s total. Perks placed first in the 1000-yard freestyle with a time of 10:56.78 and followed that up with a victory in the 200-yard backstroke, finishing in 2:11.89.

“My times were really good for this point in the season, but for me I see it as what I need to do to get where I want to go,” Perks said. “I’m never satisfied… I know what I need to work on, so I was happy but there’s more to do.”

Sophomore Tara Leininger earned first place in the 500-yard freestyle in 5:25.42, and followed it up with a third place finish in the 200-yard freestyle to record three more points for the Leopards.

Both the men’s and women’s teams are relatively young, with 51 of the 70 swimmers and divers in their freshman or sophomore years.

“Our incoming freshmen class is definitely a lot bigger than what we had last year, and that adds to our depth,” Gorgan said.

“[The freshmen] are doing an outstanding job,” Dailey added.

Both teams have a few weeks off before returning to action, with the women set to face Long Island University on November 8 before both teams travel to Navy the following day for a Patriot League meet.