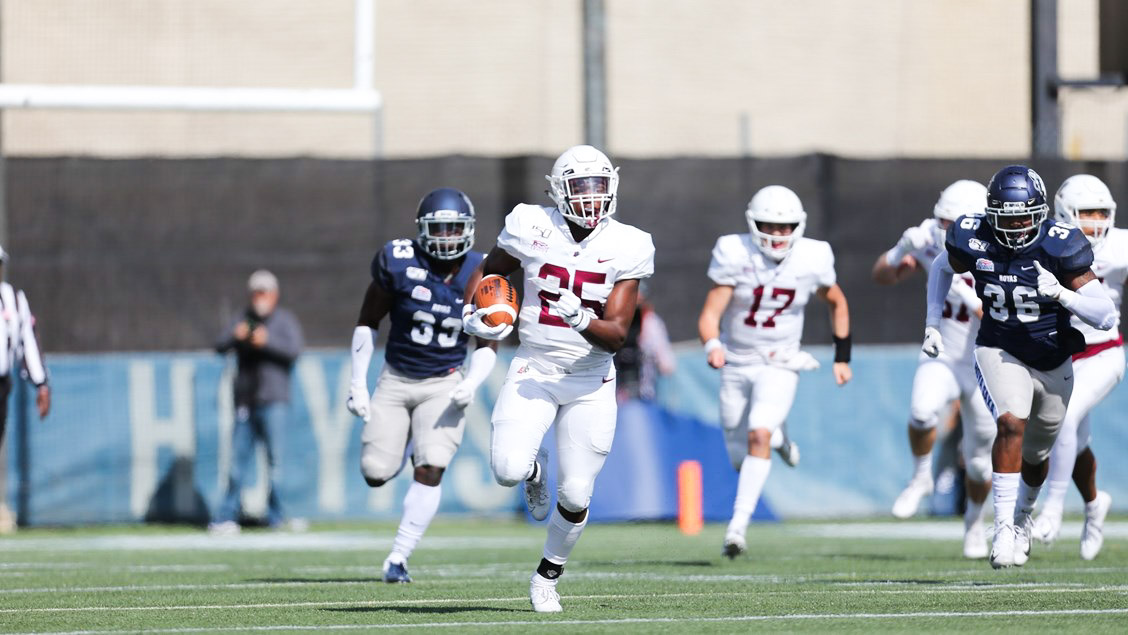 Freshman running back Jaden Sutton (25) scored the team’s only touchdown on an 86-yard run. (Photo courtesy of Athletic Communications)

The Lafayette football team took on the Georgetown Hoyas this past Saturday to open Patriot League play but came up short in a 14-10 loss. The Leopards are still searching for their first win of the season, as their record now stands at 0-7 overall, and 0-1 in the conference.

“It was just like any other game, you know, win or lose, just file it away,” head coach John Garrett said when asked about the team’s ability to bounce back. “There’s too much to do in preparation for the next game to be wallowing in your sorrows after a loss or spend too much time celebrating after a win. So you flip the switch, and you go because every week, you’re judged by how you play.”

The Hoyas got on the board first after forcing an interception and taking over on the Lafayette 21-yard line. Georgetown needed seven plays to score their first touchdown and open up a 7-0 lead.

With just under a minute left in the first quarter, Lafayette freshman running back Jaden Sutton exploded out of the backfield for an 86-yard touchdown to tie the game at 7-7. The run was Lafayette’s longest play from scrimmage this season.

“It was originally a designed dive play. Once I saw the receiver motion behind me, the cornerback ran to the opposite side of the ball, so there was nothing on the outside,” Sutton said. “But once the ball snapped, I still focused on that dive play, but when everything was clogged, I trusted my speed and got to the end zone.”

Georgetown controlled the ball for the final seven minutes of the first half which culminated in a 70-yard drive and a touchdown to regain the lead at 14-10.

The Lafayette defense held the Hoyas without a point in the second half to keep the score within striking distance. An interception midway through the third quarter by junior linebacker Major Jordan, who led the game with 12 tackles, gave Lafayette field position at the Georgetown 43-yard line. The Hoyas quickly forced an interception of their own, but the Leopard defense stonewalled Georgetown on a 4th-and-1 attempt at the Lafayette 24-yard line.

“I think as a whole, this game was the best we played defensively,” said sophomore defensive back Romeo Wykle. “We didn’t get as many turnovers as we would have liked, but we stopped the run and defended the shot plays really well, so I feel like we played a really good overall game.”

After a Lafayette punt in the fourth quarter and defensive stop on the ensuing drive, a 47-yard reception by Pearson placed the Leopards at the Georgetown 29-yard line. The drive ended with a missed 25-yard field goal for the Leopards.

After a lengthy Georgetown drive, the Leopards regained the ball at their own 24-yard line with 32 seconds left. Shoemaker threw a pair of completions for 17 yards and ran for an additional 27, but was not able to get out of bounds and stop the clock to set up a final attempt to win the game.

“The expectation for today is to lay out expectations for how we can beat Bucknell,” he added. “And we expect the guys to be laser focused on that because that’s what they can control.”

Lafayette will face Bucknell in a home conference game tomorrow at 3:30 p.m.