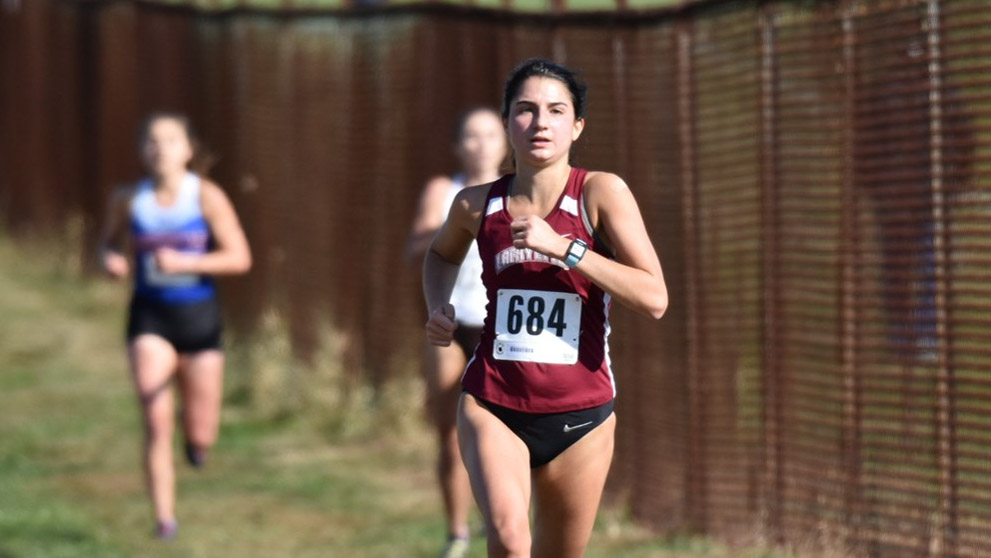 Junior Gabi Galletta (684) was one of two women from Lafayette to place in the top ten. (Photo courtesy of Athletic Communications)

This past weekend, the Lafayette men’s and women’s cross country teams secured third place at the Leopard Invitational. The meet was the team’s fourth and final meet of the fall season before the Patriot League championship.

Junior Gabi Galletta won the women’s 6K race with a time of 22:50.88, and paced all runners from start to finish.

“It felt great to win the race on my home course,” Galletta wrote in an email. “As a team, we have been practicing on the course regularly, so I know it like the back of my hand.”

“Metzgar is known to be an incredibly challenging cross country course, so I am extremely proud of myself and my teammates for racing some really fast times and truly competing with the other teams,” Galletta added.

“The team has improved a ton this season. We’ve been getting course, season, and lifetime PR’s at our races, as well as being the fastest cross country team that Lafayette has ever had,” Galletta wrote. “[That’s] a huge indicator that we have been improving as individual runners and as a team.”

“I think our team’s effort to remain positive and stay confident has helped us get to where we are, and where we hope to be at Patriot Leagues,” she added.

The men’s and women’s teams have 22 combined freshmen and sophomores out of 30 total runners, and the first years in particular have hit the ground running.

“The team dynamic this year is the best it’s been since I’ve been on the team. We got an amazing batch of freshmen who are already contributing so much to the team’s success after being here for just a couple of months,” Galletta wrote. “As a captain, I am so proud of everyone’s hard work and dedication this season.”

Schmeizer said that the team will continue training during the next week, but will focus on being healthy and prepared for the championship meet.

“The focus must be on staying healthy, nursing nagging injuries and tapering off the mileage,” said Schmeizer. “Nothing we do in the next two weeks will make us better runners. The important thing is that we don’t run ourselves into the ground.”

The Leopards travel to Hamilton, N.Y. on November 2nd for the Patriot League Championship meet hosted by Colgate.