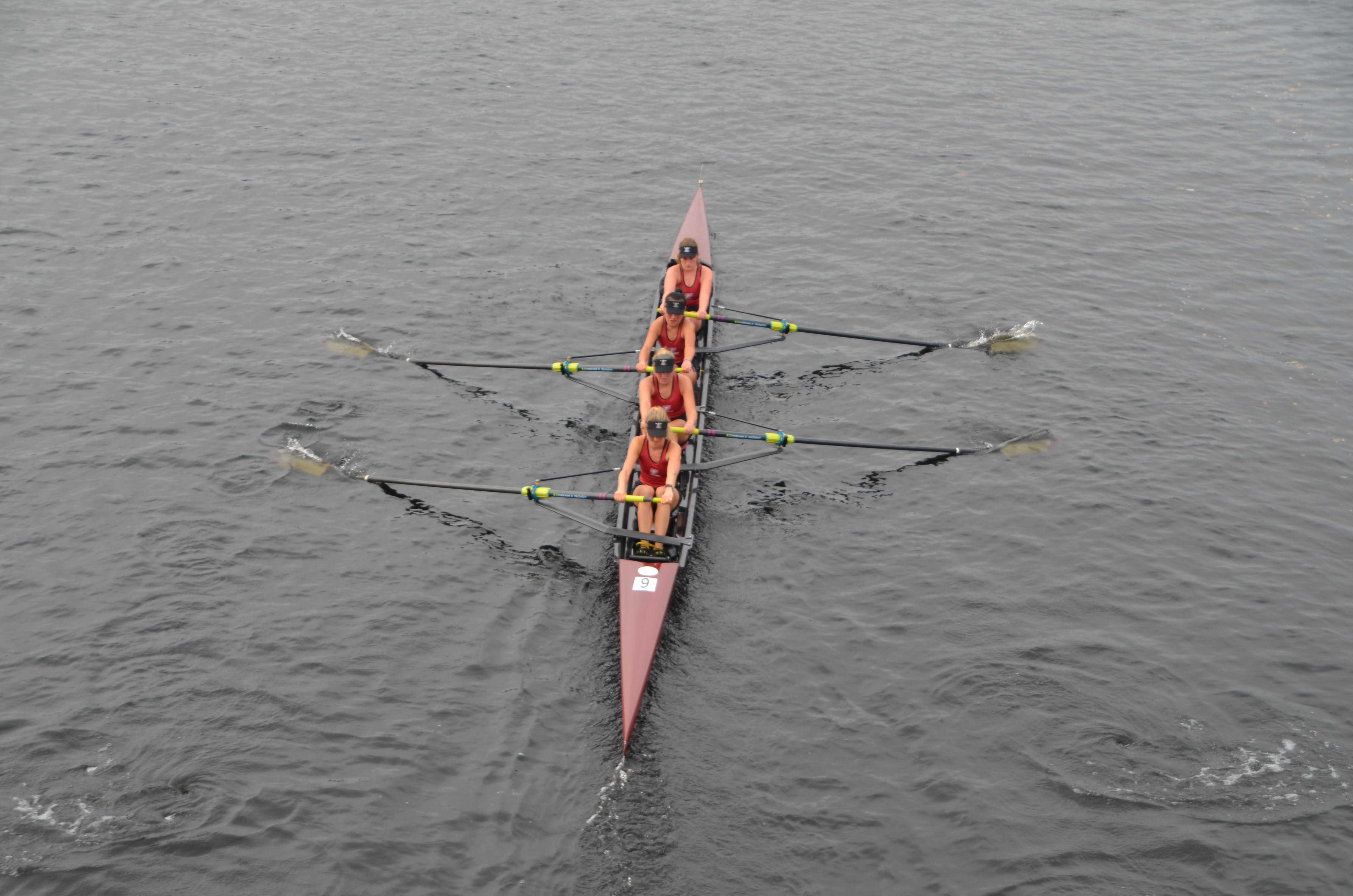 Crew’s women’s 4+ team defended their Head of the Charles bid in the 2019 regatta last weekend. (Photo courtesy of Julia Beckett ’21)

For the past few years, the Lafayette crew team has been sending their women’s 4+ boat to the Charles River in Boston, Mass. for the biggest two-day regatta in the world. Alongside much bigger schools and varsity powerhouse programs, Lafayette has established a name under coach Rick Kelliher.

This year, junior coxswain Molly LaPoint returned to the Head of the Charles, but with four sophomore rowers who hadn’t been there before. Haley Simpson, Libby Mayer, Sherry Deng, and Maddie Barto joined LaPoint and came away with 10th place out of 36, matching the finish of last year’s veteran rowers and earning another bid for next year’s event.

“It was very surreal,” Deng said. “Anyone who gets involved in rowing knows about the Head of the Charles. It was a lot of pressure because last year’s boat did so well and they were seniors and we’re fresh off our novice year.”

Kelliher said that although the team finished 10th, a few seconds sooner could have bumped them all the way up to fifth.

“They’re a young crew, all sophomores, and it was a great showing,” Kelliher said. “It was a very strong showing to be in the top 10.”

“They’re one of the few clubs left in the regatta,” he added. “They’re almost all varsity teams. The boat that was right behind them was NCAA [Division III] champion [Bates College]. It shows what level they compete [at]. Being a club team from a small school it’s remarkable what they’re able to do.”

It was the team’s chemistry and their victory at the novice event, the Dad Vail Regatta, last season that led to Kelliher entrusting the four sophomore rowers with the task of earning another Head of the Charles bid.

“I don’t think any of us came off our novice year assuming we’d be in the boat,” Mayer said. “At the beginning of the year, our coaches worked to see who’d be the best boat. Our chemistry was good. Coach Rick [Kelliher] said we may not be the most powerful rowers, but we know how to not slow the boat down. That worked in our favor.”

The boat members didn’t know how well they did until they finished, since not all boats start at the same time, but they could gauge how well they were doing if they passed other boats. Once they got to the dock, Kelliher told them that they had achieved his goal for them of placing in the top 10.

“On the course you’re set off between two boats,” Mayer said. “We passed one boat but didn’t pass any other boats. Being next to a boat, especially in a turn, gets you going. There’s so many bridges and turns.”

The rowers said having family, teammates, and coaches all there for support was a boost. Deng said it was like every time they passed a bridge they had people supporting them, and that the team’s coaches were biking alongside them.

“You don’t have anything more to give, you’re exhausted, you’re in pain, then you hear your family cheering and you know you have to finish,” Barto said.

Deng rowed in high school for some time, but otherwise the team was comprised of athletes who had no crew experience prior to college.

“I first heard about [the Head of the Charles] last year when the boat from last year was going,” Simpson said. “You could tell from the things they were saying that it’s such a big deal. Since then, I thought that would be super cool to do one day, but I never imagined I’d get there.”

LaPoint said the regatta is one that specifically requires a lot from the coxswain, so she felt her experience helped her.

“[LaPoint] navigated the course while avoiding collisions, it was remarkable,” Kelliher said. “She made these split-second decisions where if she turned in the wrong direction she’d have a collision. The crowd was going nuts watching it unfold.”

“Both last year and this year I watched a lot of videos on the course and did a lot of readings,” LaPoint said. “On Friday I went to a coxswain clinic, and they taught you the overall atmosphere and how to turn and call different boats.”

Deng said it would have been easy to reduce expectations with excuses like the rowers all being sophomores, but that they “put that aside” and were confident in their abilities.

“I think it’s really good to continually set goals,” Barto said. “We got in the car [after the regatta] and said ‘Great, we kept the bid, what’s the next goal we’re working towards?’”

The team will be back on the water tomorrow for the Head of the Schuylkill Regatta in Philadelphia, Pa.