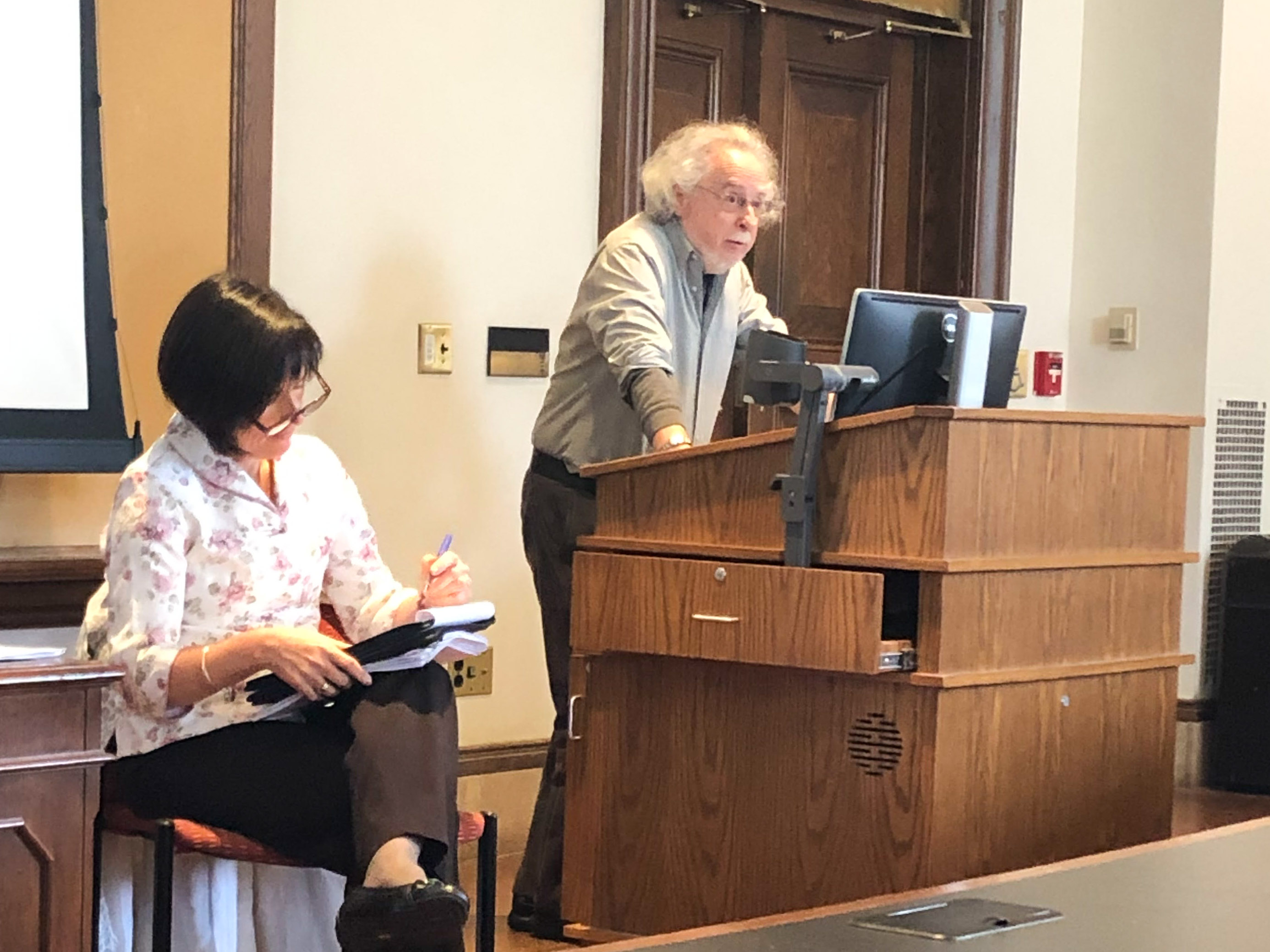 Architecture professor Paul Felder shared his concerns about the expansion process in the October 8th meeting. (Photo by Gabby Tropp ’20)

The ad hoc committee on expansion held two meetings over the last two weeks to gather feedback from faculty and administrators on their ongoing task of monitoring the college’s expansion initiative. The meeting served to engage the Lafayette community in an open forum, during which students, staff, and faculty could voice insights and opinions about the expansion process.

The college is currently in the fourth year of its official expansion efforts. According to Professor Rosie Bukics, the chair of the committee, the college has added 129 students over the last 4 years, just over 30 students on average per year.

“Sometimes people are surprised to find that [the expansion moves at] a fairly modest pace,” President Alison Byerly said. “It’s been going exactly on pace, and we’ve been pleased with that.”

During both meetings, the committee shared the systems that they have been using to evaluate the efficacy of the expansion plans thus far. Bukics said that they have developed several new metrics, and that they have used these to assess the potential impact of the college’s plans.

“We’re developing new metrics, and re-using existing metrics,” said Bukics. “None of this is set in stone, it was our operational way of trying to get a handle on an extremely large task.”

Bukics referred to the seven different categories of evaluation and assessment that the committee has been utilizing. These categories include quality of instruction, student retention, quality of students, financial strength, quality of workplace, physical/facilities constraints, and student support services.

Along with the seven categories, or “buckets,” for evaluation, Bukics also presented information that is available to faculty and staff in an online dataset called the strategic dashboard. Bukics added that she encourages the community to consider other categories of evaluation that could possibly make the system more accurate.

Faculty members voiced concern in regards to the metrics, specifically regarding whether or not these systems will be able to properly gauge aspects of student life and the faculty experience that are difficult to derive quantitatively.

Larry Malinconico, Associate Professor of Geology and Geophysics, also voiced concerns about increasing the percentage of minority students at the college.

“I was under the impression that one of the primary reasons for increasing the size of the institution is also to increase the percentage of minority students, and I don’t see that,” he said during the meeting.

Bukics noted that, while increasing the percentage of minority students was not explicitly included in any of the seven categories, data was available for faculty members on the online strategic dashboard.

Other professors noted retention rates as an area where the data is lagging. Because professors are on the “front line” of engaging with students who may be considering transferring or dropping out, some professors noted that they could be helpful in collecting this sort of data.

Psychology professor John Shaw said that the four-year retention rate for the college is around 93%. He added that the primary point of “friction” is between freshman and sophomore year, when students are most likely to drop out or leave to other institutions.

Paul Felder, an architecture professor at Lafayette, has been in opposition of the expansion since the fruition of the plans. He voiced his concerns in a prepared statement at the expansion meeting held on October 8th.

“The money the college has wasted and continues to waste on over-paying to buy properties that it doesn’t need and leaving them vacant or underutilized for years is significant, as is the deplorably negative impact this has on the community,” Felder said.

Felder urged the community to better familiarize themselves with the community surrounding the college and with the development issues involved in the expansion.

“You would be doing the college a great service if you thoroughly examined how further expansion, if that proves to be in the College’s best
interests, can be carried out in a way that is beneficial to both Lafayette College and its neighbors,” he said.

The committee noted that they are also taking into account the individual services that could be challenged by an increased number of students, including services as the counseling center, dining services, and career services.

Bukics described the committee as “very responsive” and revealed that the plans are constantly evolving around the feedback that is given from the community.

Although the committee will ultimately make their recommendations to the faculty meeting on December 3rd to stay, resume, or reduce the expansion, Bukics made it clear that there are multiple hands involved in assessing the impact of increasing the number of students.