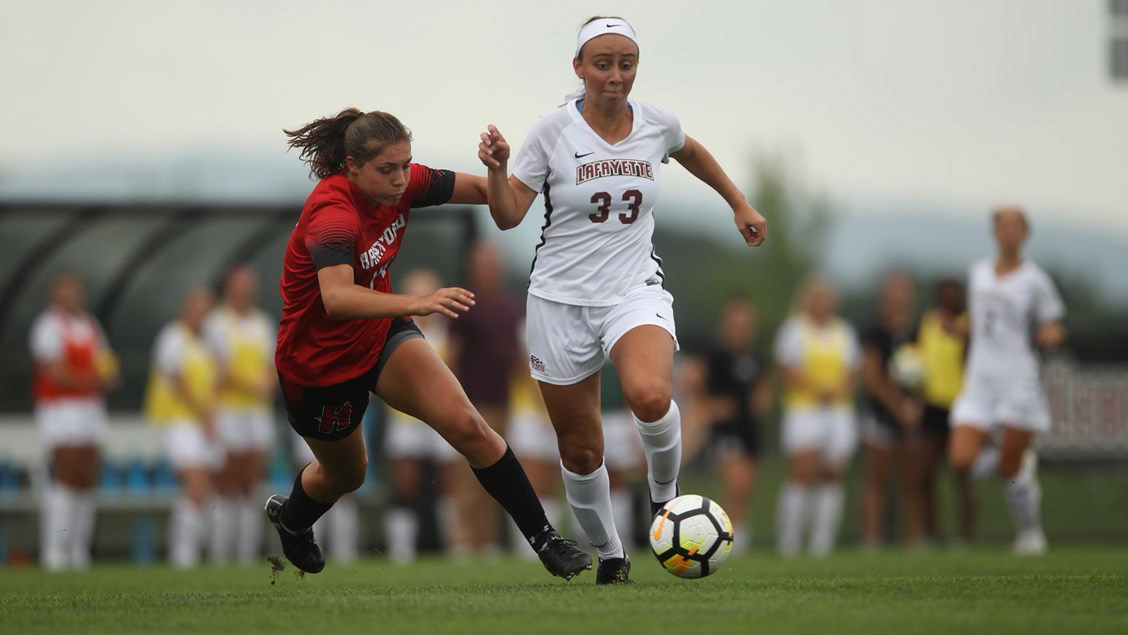 The team will face American University in a conference match tomorrow at 3 p.m. (Photo courtesy of Athletic Communications)

The Lafayette women’s soccer team earned a 2-1 overtime win last Saturday over conference opponent Colgate, with junior forward Krista Kissell scoring the game-winning goal in the 93rd minute. It was the second consecutive overtime game for the Leopards, who battled to a 1-1 tie last Wednesday at Navy.

With the win, the team’s overall record improves to 6-4-2 with a 2-1-1 mark in Patriot League play. It was the program’s first ever win in Hamilton, N.Y., and the first victory over Colgate since 2000.

Lafayette was the first to get on the scoreboard at 21:01 when freshman forward Sarah Oswald scored her first career goal with a well-placed shot into the upper left corner from 25 yards out.

“It was awesome,” said Oswald. “I’m still learning and working with other center forwards, but all of them have been really helping me transition to be a collegiate soccer player.”

The Leopards held their 1-0 lead until midway through the second half, when Colgate tied the game on an outside strike that snuck just under the crossbar. The Raiders kept the pressure on, taking seven more shots in the 10 minutes following their goal.

“They were frantic when they had the ball, and were pushing it upfield trying to get a ‘miracle goal,’” Oswald said.

Despite playing in their second consecutive overtime game after tying Navy in double overtime last Wednesday, the team found renewed energy for the extra frame.

“Going into overtime, no one was showing they were tired,” Oswald said.

“We were excited and ready to get after it, we had nothing to lose,” added junior goalkeeper Maggie Pohl. “That translated to how we pushed for the final goal.”

At 92:33, Kissel brought home the win with her team-leading fourth goal of the season off an initial free kick by junior defender/midfielder Camryn Monfort. Freshman center back Rory Schauder recorded the game-winning assist after she redirected the ball to Kissell who netted the goal.

“[Schauder] stood out and was really dominant,” Pohl said. “And [Kissel] created a lot of opportunities.”

Pohl played the entire first half and made a pair of saves before being relieved by freshman goalkeeper Natalie Neumann, who made five saves during the second half and brief overtime period.

“Every game they come up with big saves,” Oswald said. “It’s nice to be able to have confidence in our goalies, it takes a big weight off of things.”

Oswald also praised junior midfielder Sophie Saldivar for her effort against Colgate. Saldivar registered three shots in the game, including one on goal.

“[Saldivar] was a standout for us because it was getting frantic and cramped in the midfield [in the second half], but she would get on the ball and calm everything down,” Oswald added.

With another Patriot League game in the books, the Leopards turn their focus to their next conference matchup with American University on Saturday. The Eagles are tied for third in the league in goals per game but are ranked last in goals allowed.

“Prepping for [American] will be working on all aspects of the field,” Pohl said. “We’ve heard they have a very good attack but are weaker in the backfield. Breakaways will be key.”

“We always take every week with a fresh mind, so we’re focusing all of our energy on Saturday’s game, nothing else,” added Oswald. “That win was expected, and now it’s time to go against American.”

The Leopards host American tomorrow with kickoff scheduled for 3 p.m.