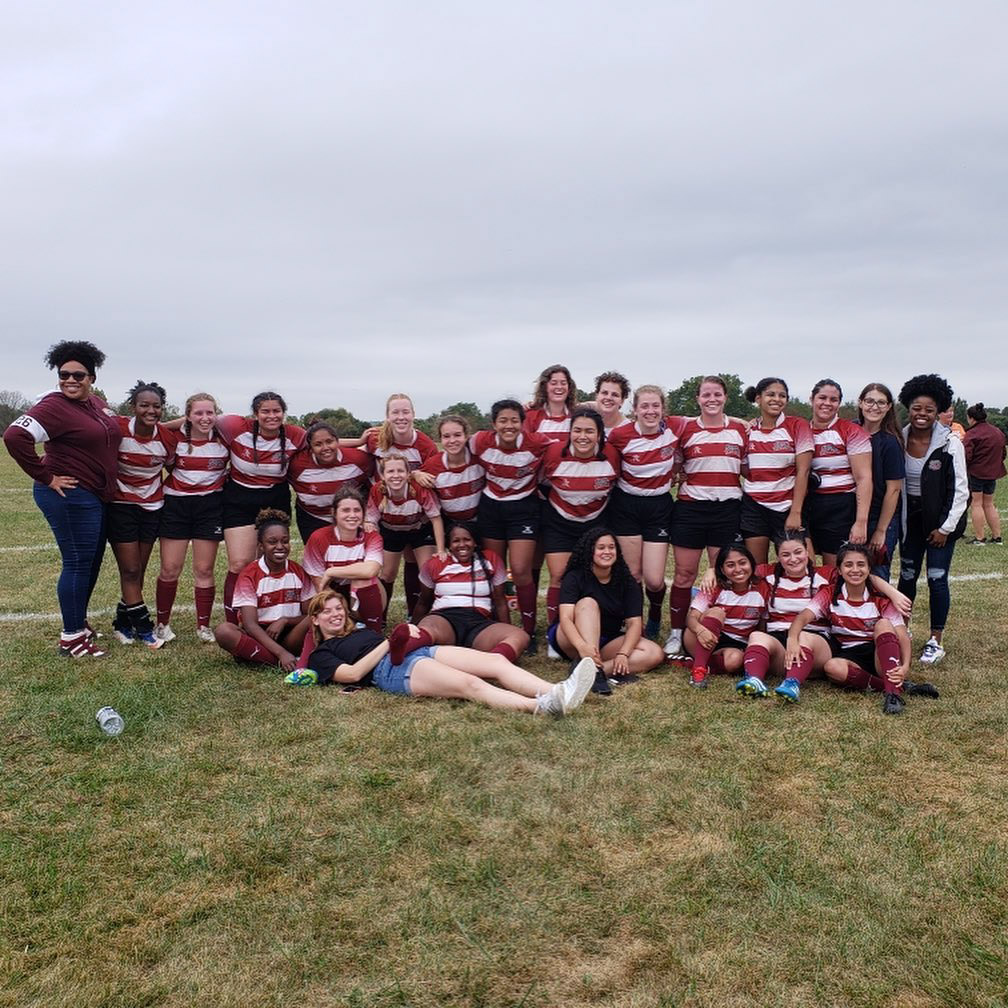 The team will have the fall break weekend off before their next match against Neumann. (Photo courtesy of the Lafayette Women’s Rugby Team Instagram page)

This past weekend the Lafayette women’s rugby club team defeated Swarthmore College, 37-29, to move their record to 1-1 after a loss two weekends ago to Widener University, 42-27.

The Leopard got off to a quick start against Swarthmore, opening up a 25-0 lead at halftime. Senior inside center Jordyn “Sparks” Marlin, sophomore outside center Cori “Neuro” Davis, and freshman wing player Cameron Cloud all had tries in the first half.

“The game against Swarthmore went incredibly well, especially considering it was our second game of the season,” said junior scrum half Nicole Segalini. “We were leading in the first half and then they started to catch up, making it super exciting.”

Swarthmore stormed back in the second half, scoring 29 points of their own while Lafayette added five on a try by sophomore fly half Elise “Saber” Hummel to bring the score to 30-29 with five minutes left.

The Leopards then engaged with the Phoenixes in a late scrum to gain control of the ball. In the ensuring chaos, junior fullback Jerri Norman was able to secure the ball and score the game-winning try in the final minute of play. Cloud sealed the game with a two-point conversion kick.

“This game wasn’t won by a single act,” Segalini said. “It was won by a continuous series of all team members playing their heart out and communicating with each other.”

Cloud and Davis were named the players of the match against Swarthmore, according to the team’s Instagram page.

In the loss to Widener two weeks ago, Marlin opened the scoring with a kickoff score to give Lafayette a 5-0 lead. After three straight tries by Widener, Davis recorded two tries and Cloud nailed another conversion kick. Widener scored one more try in the first half as Lafayette went into the break down 20-17.

Norman added a kickoff score of her own to give Lafayette a brief 22-20 lead before Widener regained the lead with a flurry of late scoring on their way to a 42-27 win. Norman and freshman pack player Reilly Hughes were named the players of the match.

“To train we have three practices a week,” said Segalini. “Two of which are lead by our coach, Rachel Grispon, and the other led by our captains Jordyn Marlin and [senior 8-man] Jay Little.”

As a club sport, the team is responsible for recruiting all their new members at the annual involvement fair.

“We tell everyone we meet at the involvement fair to give it a shot, there is a position for everyone on the field,” Segalini said. “We have players like myself who are short and some players who are quite tall, it doesn’t matter.”

“Our rookies this year have put their entire heart and soul into everything they’ve done,” she added. “They are an incredible group that brings unmatched enthusiasm and drive to the team.”

“They continue to impress us every time they step onto the pitch.”

The team will return to action against Neumann University next Saturday.