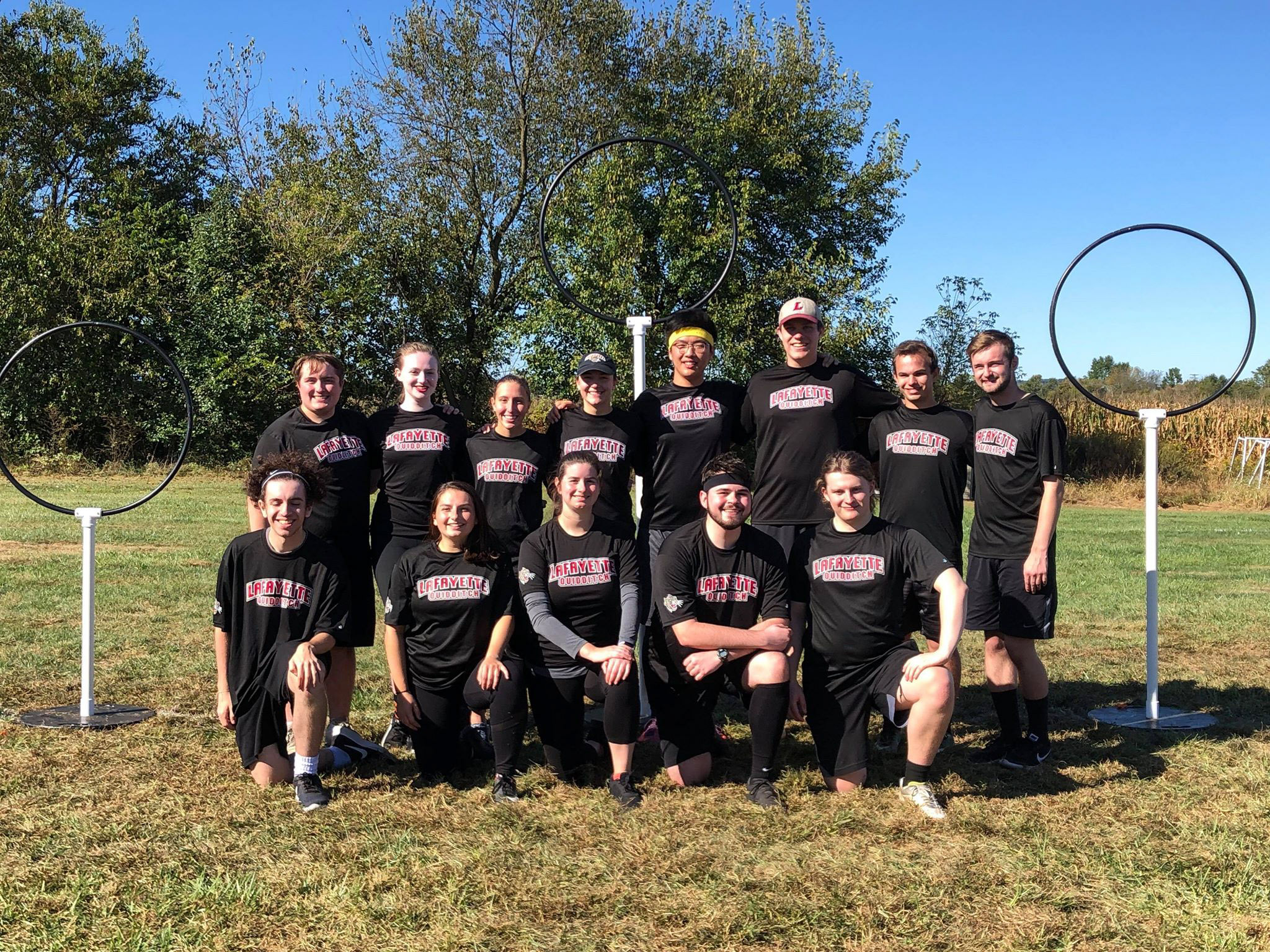 The Quidditch team has integrated a number of new members so far this fall. (Photo courtesy of Richard Chowanec ’22)

The Lafayette quidditch team hosted their annual MarQUID de Lafayette tournament last Saturday and went 2-2 to earn third place out of four teams. It was the team’s opening tournament of the fall semester, with a number of new players competing in their first ever matches.

“I think the entire [team] performed very well, especially for our first tournament of the semester,” said sophomore beater Richard Chowanec, president of the team. “We have to work out all of our kinks at practice.”

In their first game against Chestnut Hill, Lafayette won 70-40 on a snitch catch by junior seeker Dominic Zhang, which gave the team 30 points and ended the game automatically.

“There are obviously some issues that are associated with anybody’s first time on the field but we’re kind of used to that,” said head coach and keeper Will Pfadenhauer. “But aside from that I thought it was really great, I thought it was a really good start to the season, and I’m pretty satisfied with how it went.”

Similar to the quidditch depicted in the popular Harry Potter series, the chasers advance the “quaffle,” which is usually played with a volleyball, in order to kick or throw the ball into one of three upright hoops. A score of the quaffle is worth 10 points. Each team also has two beaters, who throw dodgeballs, referred to as “bludgers,” to disrupt play. When hit by a bludger, players must return to their own goal before continuing to play. All players compete with a broomstick between their legs at all times, according to US Quidditch.

Teams have seven players on the field at a time, consisting of one seeker who chases the snitch, as well as three chasers, two beaters, and one keeper who protects the three hoops. The snitch is played by a neutral athlete, who is released into the game during the 18th minute of play. The snitch holder wears yellow and runs around the field with the snitch ball on their waist. Seekers can tackle the snitch, and the catch of the snitch ends the game regardless of the score.

The team’s second game was a resounding win against Kutztown University, 170-30, with another snitch catch by Zhang. Chowanec credited the team’s beaters consisting of seniors Errol Flynn and Lindsay Altschuler, and sophomore Sean Trezza, for using “their experience to our advantage,” in defending Lafayette’s hoops.

Lafayette faced Penn State University (PSU) in their third game and lost 160-60. Chowanec noted that PSU is part of the United States Quidditch Association (USQ), which is an official league, and therefore they “expected a tough match against them.”

“We played them pretty close until the snitch was released and then it fell apart,” Pfadenhauer said.

The team went into the tournament as the third seed in the bracket, and therefore had to face the second seed Chestnut Hill once again. Lafayette held a 90-70 advantage before the Griffins caught the snitch to earn the retribution win, sinking Lafayette to third place with a 100-90 victory.

“We were up by 20, we were looking to get one more [quaffle] goal,” said Pfadenhauer. “We were pushing for one more goal to give us a little bit more breathing room and send it to overtime and it just didn’t work out.”

Chowanec said that both he and Pfadenhauer contributed to the team’s scoring, as well as freshman chaser Ben Herman, sophomore seeker/chaser Zhang, and senior chasers Gabby Tropp and Becca Hetrick.

“After the tournament this past weekend, I see a lot of potential in the team as a whole,” Chowanec said. “I am extremely hopeful for the future of the team.”

Pfadenhauer said the team has been doing a lot of running so far during their practices and that the beaters have been isolated from the chasers so each groups can work on their individual conditioning.

Pfadenhauer joined the team his freshman year when someone invited him to come to a practice. He’s now played for two full years and has helped build the program’s relevance and relationships with other quidditch teams.

“Quidditch is a full contact sport, and we’re always open to new students that want to join the team, whether they have any prior experience in sports or not,” Chowanec said.

After the fall break weekend, the quidditch team will return to action with a tournament at Chestnut Hill on Saturday, October 19th.