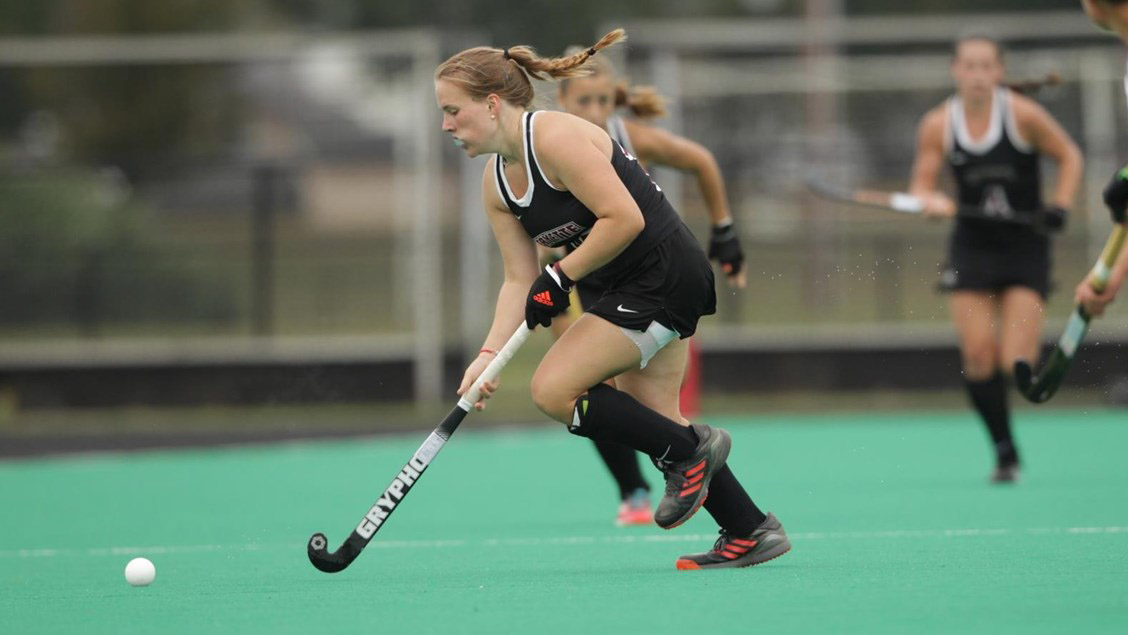 The team will face rival Lehigh next Friday in the teams’ only meeting of the season. (Photo courtesy of Athletic Communications)

“I think a lot of things have been clicking for us, so with that we are winning games and we’re playing well,” junior midfielder/defender Greta Kullby said. “It’s always fun to win games, and we’re having a good time doing it, so it’s been honestly a really great couple of weeks.”

In the Leopards’ game against Boston, the Terriers scored first in the 20th minute before Lafayette responded with two goals in the following eight minutes. Sophomore forward Molly McAndrew put the Leopards on the board with unassisted goal, and then assisted senior forward Sam Di Maio on her score just minutes later.

The Terriers responded with a goal to tie up the game in the third quarter, which eventually forced overtime after regulation ended in a 2-2 tie. After a scoreless first overtime frame, van der Geest scored the golden goal in the 73rd minute, off an assist from senior midfielder Caroline Turnbull, to give Lafayette their third straight conference win. The Terriers were picked to finish first in the preseason Patriot League poll.

“It never really crossed my mind that we weren’t going to [get] this [win],” Kullby said. “Our keys were just tightening up our pressing and outletting and just playing really simple because that’s what we do when we play our best, we play really simple.”

Lafayette outshot the Terriers 14-9, with an 8-6 advantage in shots on goal. Senior goalie Sarah Park made four saves. This overtime game was the fifth time this season the Leopards have advanced past regulation, and they now hold a 3-2 record in such games.

Against Bryant, the Leopards struck first with two goals in the first quarter. Junior midfielder Anna Steps opened the scoring in the fourth minute and van der Geest followed with her only tally in the 14th minute, both unassisted.

The Leopards pulled away with four more goals in the second quarter. Freshman forward Felicitas Hannes scored two goals on corner shots within 30 seconds to put Lafayette up 4-0. Senior midfielder Jenn DeLongis and van der Geest assisted on both of Hannes’ goals.

Park made one save and picked up her seventh win of the season, and her third shutout between the pipes. The Leopards outshot the Bulldogs 25-6, and 15-2 with shots on goal. The majority of the game was played within Bryant’s half of the field, as the Leopards held a 12-1 advantage in corners.

Despite the shutout, Kullby said the team is focusing on their “defensive presence” and how to prevent conceding goals.

“We did win 6-0 but it doesn’t take away from the fact that there were breakdowns,” she added. “So I think just keeping those breakdowns to a minimum and then keeping our defensive presence there and strong.”

The win over Bryant marked Lafayette’s fourth straight victory, and sixth out of their past seven games. The Leopards are currently first in the Patriot League with a 3-0 record, the team’s best start to conference play since 2012.

“You know we’re playing well and you want to keep playing well, but to our credit I think that we’re still keeping it pretty light and always having fun with the ups and downs,” Kullby said. “That’s kind of our feeling – we’re in it.”

“They’re incredibly strong and solid players for us,” Kullby said. “It’s honestly a great feeling to be a part of that team and to have teammates that are that good and pushing this program the way they are.”

The Leopards will host Temple University this Sunday at 1 p.m., before making the trip to crosstown rival Lehigh next Friday in another conference game at 7 p.m.