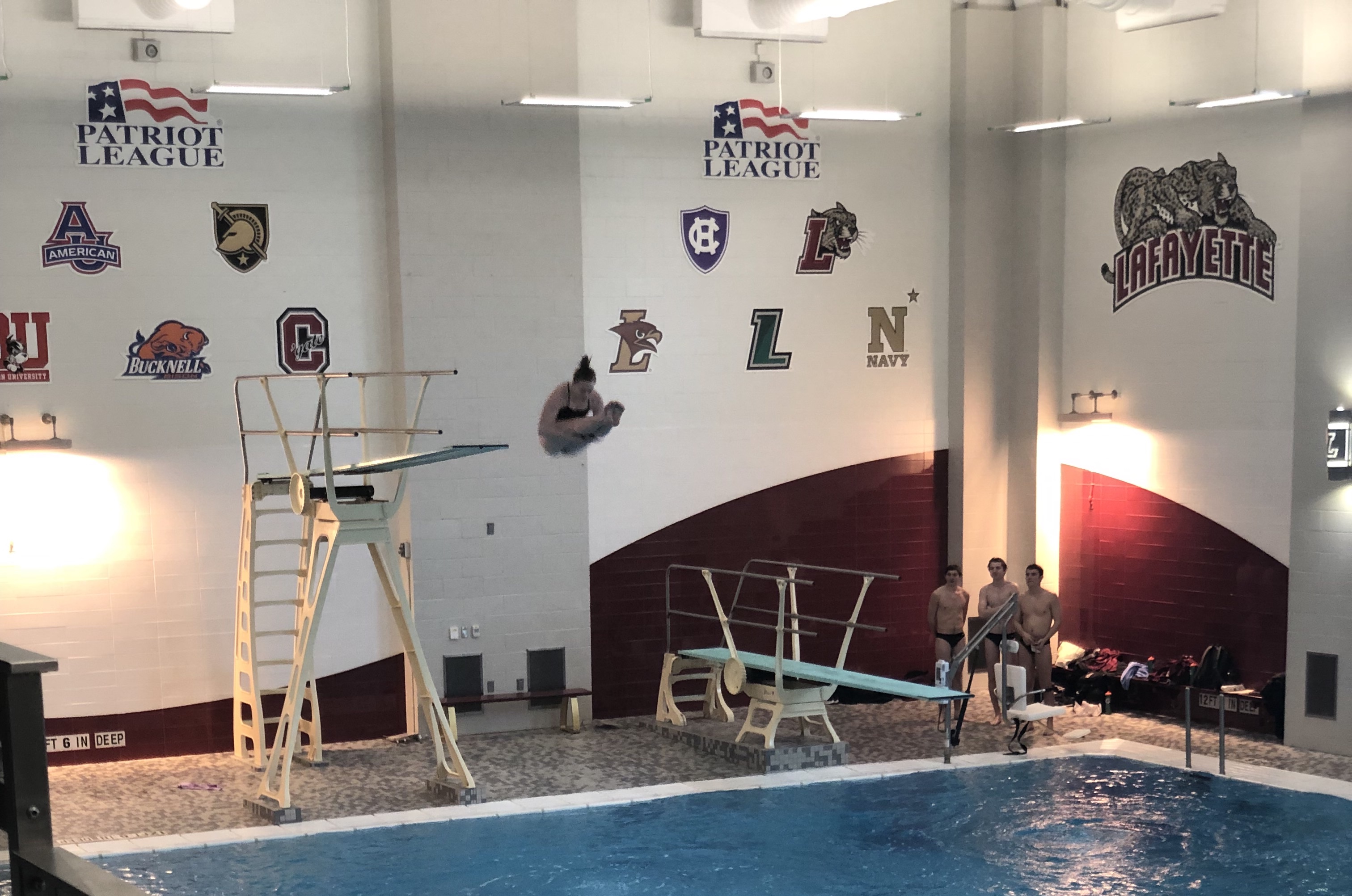 The diving team is Lafayette’s only varsity team comprised only of walk-on athletes. (Photo by AJ Traub ’20)

Swimmers crowd the edge of the pool at the Weinstein Natatorium at practice, with many waiting for the cannon to sound off. Across the natatorium in the diving pool are just four divers, continuously practicing as diving coach Cindy O’Donnell occasionally shouts encouragement and coaching suggestions. None of the divers had pre-collegiate experience.

Seniors Isabella Capachietti and Jordan Thaler, junior Rachel Petzoldt, and sophomore Eden Ephraim make up the Lafayette diving team. O’Donnell said the team continues to function through word-of-mouth recruiting, as the team has been comprised exclusively of walk-ons for years.

“I would say of the 14 years I’ve been here, I can count on one hand how many divers came to this school who knew how to dive,” O’Donnell said.

O’Donnell was on her college dive teams at Towson University and Northeastern, after an injury ended her gymnastics career. Now, she coaches athletes who previously practiced other sports to become NCAA Division I divers.

Ephraim, who was named most valuable diver last season, comes from a background of gymnastics, cheer, aerial arts, and dance. She met O’Donnell while showing her parents around the pool during family weekend, where she found out she could join the team.

“I thought about how I’ve always wanted to try diving,” she said. “So I talked to [O’Donnell], and she told me that all the people on the team had never done diving before, so I joined.”

Ephraim said after about two weeks of processes in which the NCAA approved her to be on the team, she began to practice. She said the diving board is very different from the surfaces she had used before.

A dancer throughout her childhood, Petzoldt joined the diving team her sophomore year after attending the end-of-season banquet with her then-freshman roommate, junior swimmer Maya Imperial.

Petzoldt said her dancing experience contributes to her diving, through having a good center of balance, spacial awareness, and jumping ability.

“It’s very different because I have no gymnastics [experience],” she said. “So I had to learn how to flip and dive off the board. It surprises me whenever I do a new trick.”

Petzoldt is also on the Lafayette dance team, so she balances the practice times, and sometimes they overlap. She said the teams contrast, as the dance team is much bigger than the dive team.

Although it’s a lot of work, Petzoldt said it helps her time management, and she doesn’t have regrets with her decision to become a diver for Lafayette.

“I’m really happy with [my choice],” she added.

O’Donnell said coaching is very important to a diver. It made a major impact on her career diving, and she is always looking to do the same for the team she coaches. Her motto is “dive happy.”

“Learning how to train the right way and compete are crucial,” she said. “Developing confidence in oneself through safe and effective training. Diving is 80% mental. When these skills are presented to you and you trust in the process, you will be successful.”

“The coaches I had at Northeastern framed me to be ranked one of the top divers in the country, something I never dreamed would have ever been possible,” she added.

A big focus of O’Donnell’s coaching is fundamentals.

“All these kids never jumped off a diving board before, now they’re doing doubles,” she said. “They’re flipping and twisting in all directions.”

The team doesn’t win much in the competitive Patriot League, which includes teams such as Navy, but they said it doesn’t faze them.

O’Donnell said despite the differences in experience or ability, she finds there’s a lot of respect among divers. Although other schools have recruited divers more than Lafayette, they’re not the only team with walk-ons who didn’t have experience before college.

“I think I have a lot of talent in these four girls this year,” she said. “My goal for them is to walk away when they graduate with a feeling of accomplishment and confidence in themselves that they can handle and tackle anything in life, while learning to master the art of diving.”