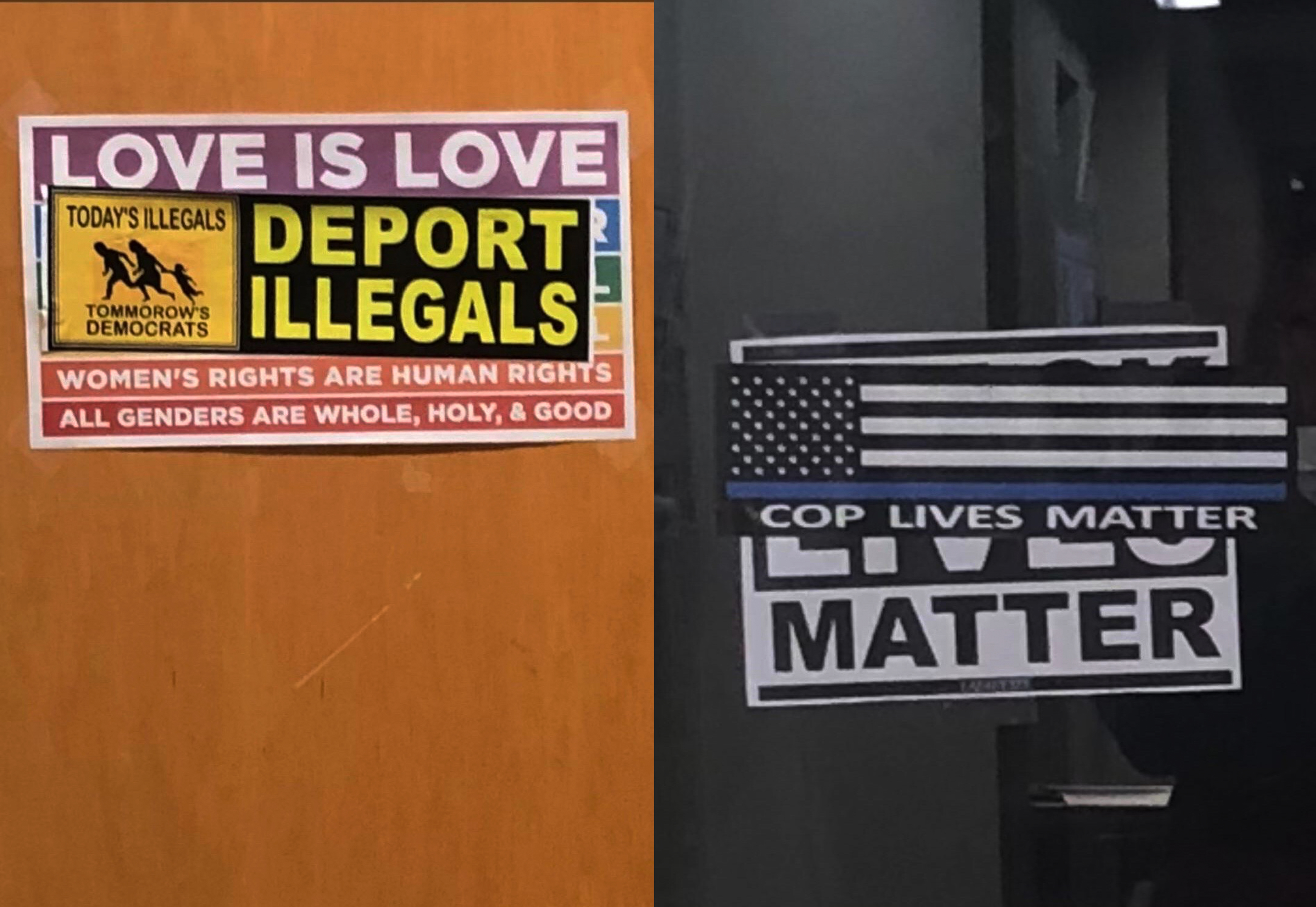 Public safety is investigating these incidents as a violation of Lafayette College policy and community standards. (Photo courtesy of Diana de la Torre ’20)

These stickers were on the doors of two engineering faculty and staff members, coordinator Lisa Karam and assistant professor Julia Nicodemus.

Director of Public Saftey Jeff Troxell explained that there were a few reports of this incident through the One Pard system, which goes to the bias response team.

“When we received several reports about a bias-related incident in Acopian Engineering Center, we confirmed that Public Safety was informed and we were glad to learn they were already working to investigate the matter,” Chris Hunt, Assistant Vice President and Dean of Students, wrote in an email. “I had an opportunity to speak directly with Chief Jim Meyer on Sunday evening. Additionally, Chaplain [Alex] Hendrickson communicated directly with everyone who appropriately submitted a report on Sunday.”

Troxell explained that as no college property was defaced, it is not reported as a crime. However, it is a violation of college policy as defacement of signs or images.

“The investigation has just started, so I don’t know the details but certainly knowing what occurred, I certainly would agree with what Dean Hunt expressed in his note [to the campus community] that that’s unacceptable behavior that really runs contrary to our values as a community. I certainly was very distressed to hear about it,” President Alison Byerly said in response to the incident.

Hendrickson and Hunt sent out an email to the student body on Monday morning in response to the incident and to announce an open community forum that took place Monday night.

“We felt it was important to acknowledge this situation, remind everyone about our bias-incident reporting procedures, and reiterate that this sort of behavior has no place on our campus,” Hunt wrote.

“We held an open forum where we responded to a range of questions and provided a safe and brave space for students to share some of their lived experiences with others,” Hunt added. “The forum was a reminder and confirmation that ongoing dialogue is necessary for the diverse community that Lafayette is today.”

Students are the “eyes and ears” and therefore let the school know of occurrences on campus, Hendrickson said at the forum, and added that students should feel safe while living at Lafayette.

“You come here, you live here and you work here, so this needs to be a welcoming [environment],” Hendrickson said. “One of the main reasons we have the [bias-report system] is so those of us who don’t live here 24 hours a day know what’s happening—especially in residence halls and academic buildings,” Hendrickson said.

When a bias report is received it is reviewed and sometimes the report is referred to Public Safety. In other cases when the conflicting parties in the reported bias incident are known, such as a conflict between two roommates that is reported by a Resident Advisor, Hendrickson explained that this is an opportunity to have an open discussion with each party.

“We often will bring [those involved] together for disagreements focused on assets, race, religion, gender, or whatever you think might be,” Hendrickson said. “The ideal situation is that we can talk with these folks and figure out how we can live together, and how to do so with respect and dignity.”