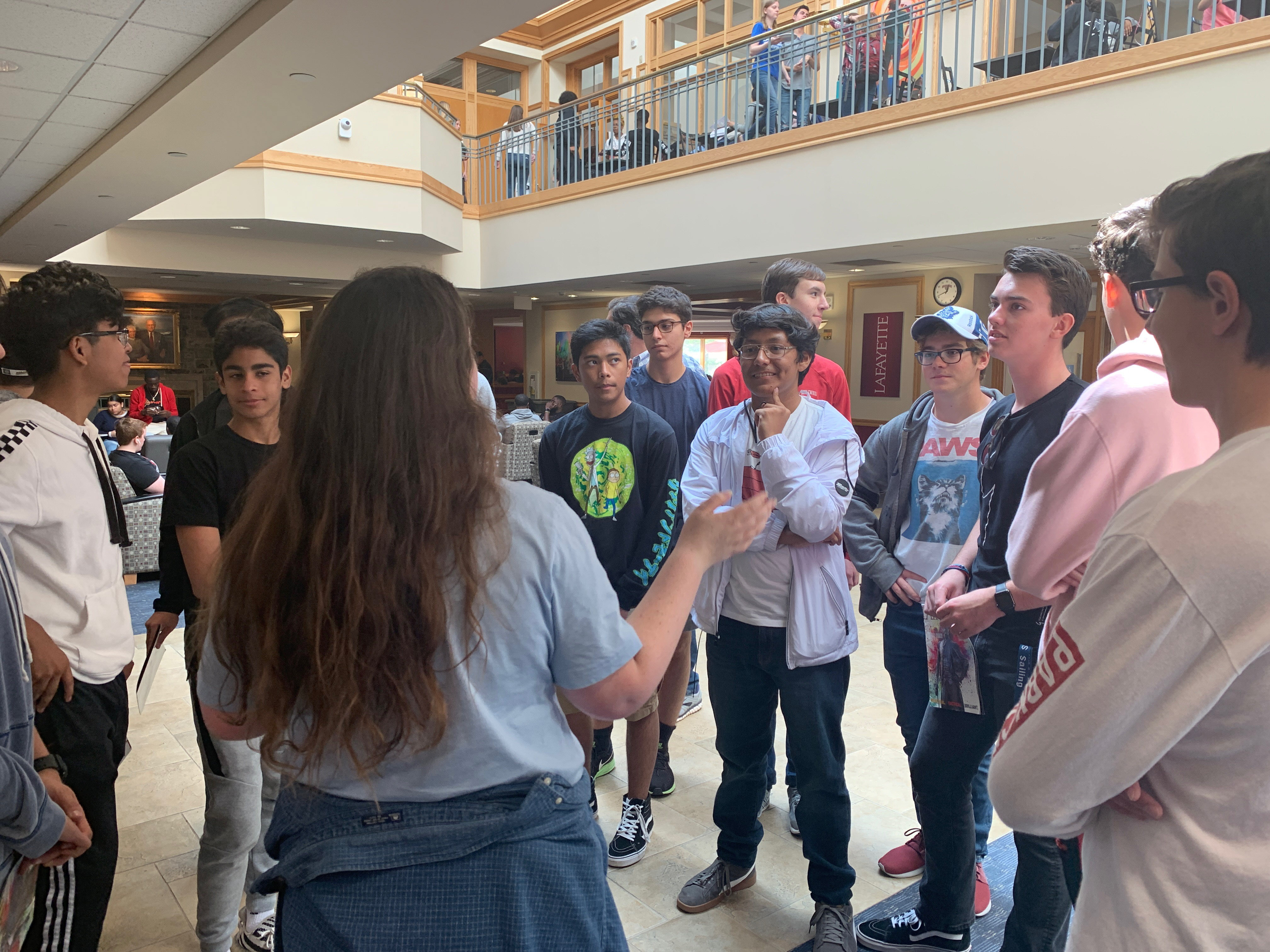 Recent changes in the administration have led to new policies, but students still say there is a ways to go. (Photo by Abi Olofin ’22)

For several former tour guides who joined the program with the goal of sharing their experiences with a more diverse population of prospective students, appealing to a broader audience meant censoring elements of their own stories.

Many of the tour guides who quit said they originally joined the program to act as an authentic resource for visiting students of color, but they quickly encountered challenges in sharing the full reality of their experience at Lafayette.

“We’re doing the best we can on how to have an awareness of our overarching community…and have many more narratives represented on campus,” said Director of Admissions Matt Hyde. “It’s critical that…we do everything that we can to make our ambassador program more dynamic and textured, in terms of who they are, where they’re coming from [and] their experiences.”

Despite the increase in representation on campus, of the more than 85 tour guides currently employed by the admissions department, only a handful are students of color. This number has continued to dwindle over the last several semesters, according to students interviewed.

Many of the students who quit said they initially joined to promote Lafayette to people of color and to allow visiting students to ask questions about their experiences as people of color on campus.

“I saw [Fayola Fair ‘19] was a tour guide, [and] I really wanted to be like her,” Savanna Toure ‘21 said. “So having people of color I knew on tour guide was like…that’s pretty cool. And I can promote black people and people of color to come here.”

“I had a really good tour guide when I came to [Lafayette],” Josette Yeboah ‘21 said. “So I was just like, okay, I want to make that same experience happen for…other people, but especially when students of color come to tour because I was the only student of color on the tour [at Lafayette].”

“I wanted to give students of color the option to have someone who’s a person of color tell them about their experience, and have it be real,” she added.

It wasn’t always easy sharing this experience, however. Prior to this semester, families were able to decide which tour group they wanted to join based on short introductory statements by each of the available guides.

Lafayette is over 65% white and a large percentage of families who come to campus for tours are also white. This created a problem for many tour guides who were heavily involved in organizations catered to people of color.

Toure said she would refrain from mentioning her involvement in “multicultural clubs” such as the Association of Black Collegiates (ABC) or NIA, a group for women of color on campus, because it would “draw away” the visitors from her.

“That was kind of…hurtful because there were many times in my freshman year where I didn’t get a tour because I wasn’t doing things that they weren’t interested in,” Yeboah said. “So…I had to kind of change who I was for a tour.”

This semester, the college changed the policy for how tour groups are chosen to random selection. According to Hyde, this was put in place to prevent families from “arbitrarily, based on surface level information, say, ‘this is the [tour guide] I want to go with’” and to help “equalize the number of visitors on a tour.”

Even after the policy change was put into effect, however, many tours continued to use the old method of dividing up the groups. Joey Illuzi ‘21, another former tour guide who is white-identifying, said that the new system “was not always followed in practice,” and that whenever it was not followed, he often noticed that students of color were less likely to share their involvement in multicultural organizations as a result.

In addition to this policy, some students felt that the content of the tours tended to focus on traditionally “white spaces.”

“Greek Life has a whole section…but literally no communities of color get talked about,” Toure said. “There’s a specific section for Greek life, like all the stats, how much they make, how much they earn, but…they don’t even have…[the Portlock Black Cultural Center] or anything in the handbook.”

Fair ‘19, who was a tour guide all four years at Lafayette, said she had a similar experience.

“I definitely agree that I had to know everything about engineering, about Greek life, about things that are historically white, and white spaces, but there was really…none of it on the flip side,” she said.

Kwabena Acheampong ‘22 was also in the tour guide program until he quit last semester, yet he did say he would love to return if his schedule became “less hectic.” Although he never felt like he couldn’t be honest on his tours, he said there were certain topics that he tended to avoid.

“On my tours, I was always speaking from my own experience, my own perspective,” he said. “Being honest and avoiding conversations about certain topics are two different things. I often didn’t go into topics of, ‘I feel like I can’t go to many professors, because not many professors are of color.’ I just didn’t talk about that. If I got a question about anything having to do with diversity, I always put a positive spin on it.”

The tour group selection policy change came in the midst of much larger changes in the tour guide program as a whole. When former assistant director of admissions Donna Rehm, whom Hyde described as “the backbone…of the college ambassador program,” stepped down, along with former director of financial aid Ashley Bianchi, the admissions team took the opportunity to give the tour guide program a significant rebranding.

Although Braswell and Pressl were unavailable for comment, Hyde said the changes were a good opportunity to “elevate…the voice of our students through [the tour guide] program.”

Some of the changes involved merging the visitation team, which covered the tour guide program, with the events team. The team also changed the name of the program from the Lafayette College Ambassadors Program (LCAP) to Ambassadors of Lafayette (AOL) and put in place seven student leaders within the revamped organization.

Also included in the new program was increased diversity training for members of the AOL program. Hyde said the admissions team has been working with the Office of Intercultural Development to provide cultural sensitivity training to tour guides to better prepare them to answer questions about diversity on campus.

The increased efforts for inclusivity training were generally well received by members of the tour guide program, but some said they felt it was not enough.

“The information [from the trainings] was extremely general, rarely reiterated, and I personally felt as though many tour guides were not internalizing or paying close attention to the information at all,” Illuzi wrote in an email. “This can easily be gleaned from observing tours, as a large percentage of tour guides will completely gloss over the Gender & Sexuality Resource Center…and the Office of Intercultural Development when touring families through Farinon.”

Although Illuzi said he believes that the program would benefit from having more diversity training, he said the term “diversity” itself is “used as an umbrella term or buzzword to discuss certain issues without delving into any helpful or educational detail.”

“Even though most tour guides are white, [they] still should be able to talk about diversity,” Fair said. “Even if it is factual, that should be something that you’re talking about. And I think a lot of the white tour guides really had no capacity to do that for even the…race demographics on this campus.”

Yeboah also said that white students do not necessarily have to speak on behalf of students of color, but that during each tour, students should be “equipped with the information to…give to students of color” that happen to be touring. She noted that she was often approached by visiting people of color after their tour to ask questions on topics that “they [were] not going to get from their tour guide,” such as who the black professors are on campus and what resources are available to students of color.

“We’re not saying that you need to force in everything about how people of color here are treated…but we just want…tour guides to be equipped with the information to give to students of color [that] they happen to have them on a tour,” she said.

“You can’t just know a small subset, you need to know about all of the mechanisms at the school,” she added.

Acheampong said he felt that when diversity and inclusion was brought up as part of training, white students were often at “the edge of their seat” due to the idea that white students do not bring additional diversity to the college.

A common misconception, Acheampong said, is that white students don’t add to diversity. He said that color is not the only factor to consider, and that many other elements are included, such as religious involvement, sexual orientation, and personality type.

“No matter who you are…you add to the diversity on campus,” he said. “[But] how we’re accommodating to that, how we are working on diversity, we’re not all the way there yet.”