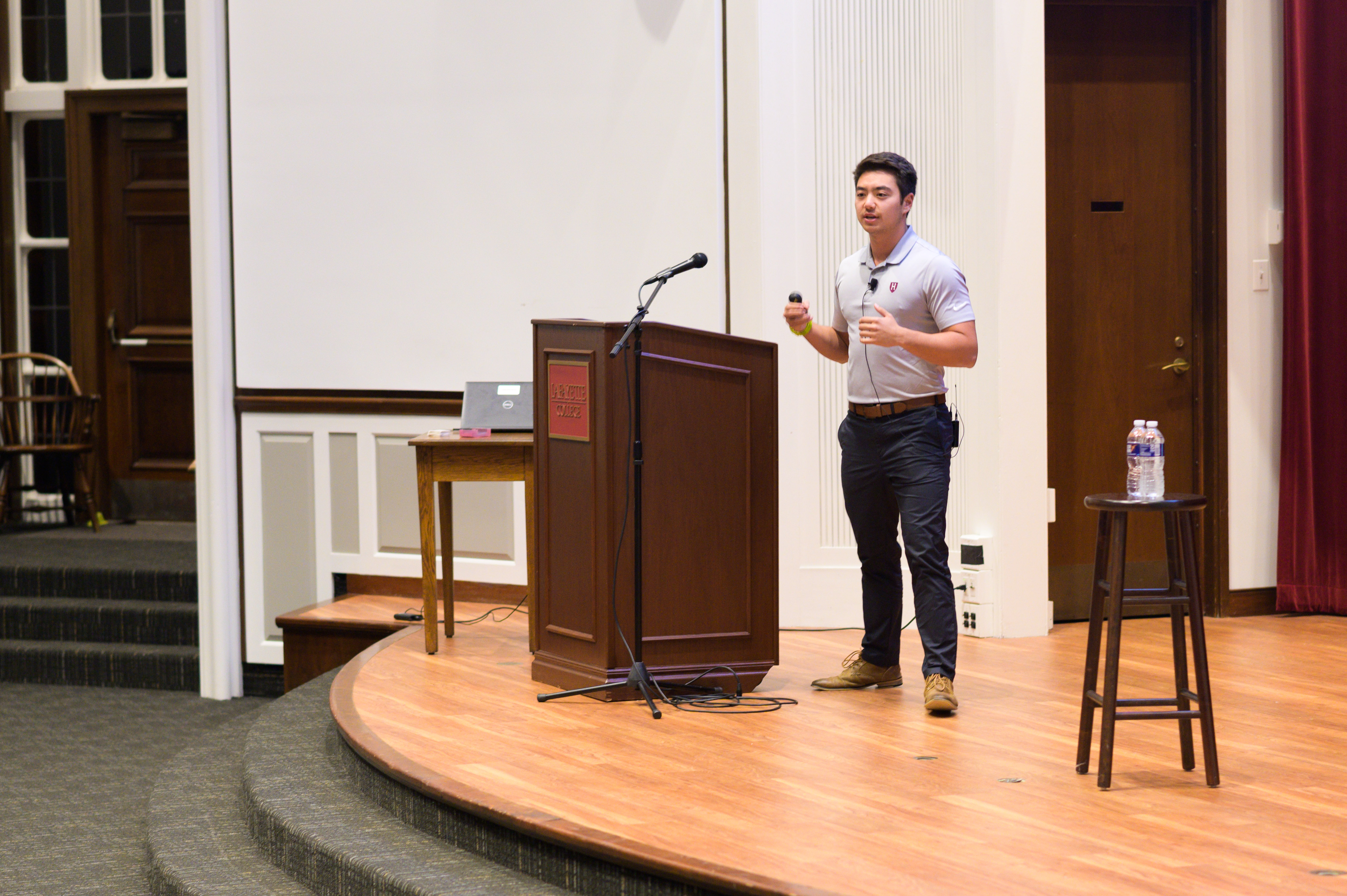 Schuyler Bailar spoke on his experience as a transgender man at Harvard’s NCAA division I swimming team this past Tuesday. (Photo by Brandon Marin ’22)

“As we go past a certain point, I think it’s about unlearning all the things [we learned] about who we’re supposed to be, to figure out who we are,” Schuyler Bailar said in his talk as Lafayette’s keynote speaker for LGBTQ+ history month. Bailer, a transgender college student spoke to his experience accepting his identity and his time on Harvard’s swim team.

Bailar, who graduated from Harvard in 2019, is “the first transgender athlete to compete in any sport on an NCAA [National Collegiate Athletic Association] Division I men’s team,” according to an announcement by the Office of Intercultural Development.

“Harvard was absolutely amazing. I don’t know what they could’ve done better,” Bailar said to his audience this past Tuesday.

Bailar said that even though he was a masculine-presenting child, he did not come out as transgender until after high school, when he took a gap year. Despite his 4.0 GPA and being recruited for Harvard’s women’s swim team, he was “miserable.”

During his gap year, Bailar attended a treatment center for eating disorders. Before this treatment, however, he said he had not thoroughly thought about his identity.

In addition to Bailor confronting the issues he had with his body in the treatment center, he realized that his issues were rooted in who he was and how he viewed himself as an individual.

“It was in that place that I was able to say, for the first time in my life, that I’m transgender,” he said.

After embracing his gender identity, Bailar called Harvard’s women’s swim coach and opened up to her. His coach was supportive of him and was given the option of joining both the women’s and men’s team.

The men’s coach was reasonable, Bailar said, and offered him a spot on the team. However, Bailar declined at first because he was “terrified.”

Bailar said he originally wanted to present as a man and swim for the women’s team, however, that changed once he got to know the men’s team. His first time competing for the men’s team was also the first time he had competed in about two years.

“I felt like I had a lot to prove, and I was very afraid I couldn’t prove it,” Bailar said.

Nevertheless, after his first competition, Bailar unexpectedly broke his own record, which he didn’t expect to do so until later into his college career.

Bailar swam for Harvard for four years and has recently accepted a job in Seattle. In the meantime, he is touring schools and universities all over the country, where he is speaking to students from kindergarten to college.

Three students, Kyra Helfrich ’20, Anna DeVault ’21 and Milena Berestko ’22 expressed the impact that Bailar had on them.

Helfrich said that she was pleased that Schuyler “made sure his audience was up to date on definitions and phrasing to use while talking to him, making the audience define transgender and having a mini-Safe Zone training.”

“That was important for an audience and important to keep him protected from ignorance as well, I think,” she added.

During the talk, Bailar also spoke about the importance of supporting loved ones who come out as transgender, and the grief that comes out with the process of that acceptance.

DeVault said she deeply related to this sentiment, as she has an older brother who is transgender.

“That was really meaningful for me,” she said. “I felt very validated by his words, on [how] it’s normal to feel grief when something like that happens, and it’s not because you don’t approve of their identity, but it’s more because you’re grieving the person that you’ve known for so long, and it’s a big adjustment.”

Bailar brought a “positive, igniting energy to the room,” Beresko said, adding that she “loved” listening to his story and his process of transitioning.

“Bailar was so honest, answering all of the questions the audience asked him and even reminiscing on other talks and uncomfortable questions he was asked in the past. It was refreshing to hear his story with a focus on how it is to be a transgender athlete,” she added.

Bailar concluded his talk with the story of how he came out to his mother’s parents, who immigrated to the United States from Korea in the late 1960s.

When Bailar came out to his grandparents, he said they were supportive, and surprisingly knew more of the terms than he’d expected.  His grandmother then made him promise to still look out for and take care of his parents, even though that’s traditionally the daughter’s role, Bailar explained.

Bailar now has his grandmother’s words tattooed right below his mastectomy scars, written in her handwriting.