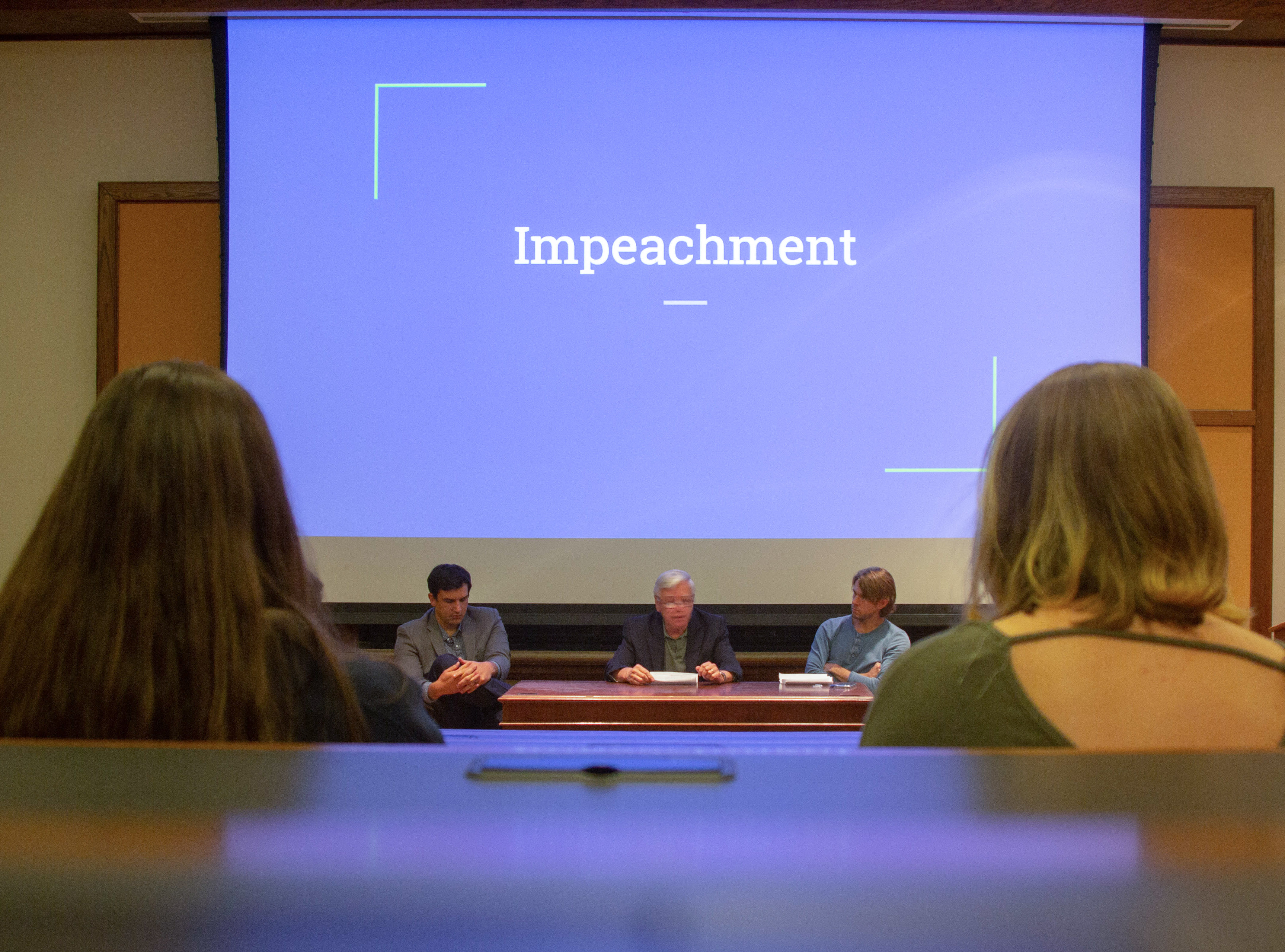 Government and Law professors discussed the notion of impeachment with Lafayette Students on Tuesday. (Photo by Abi Olofin ’22)

With an official impeachment inquiry in the House ongoing, the College Democrats chose to host a bipartisan panel last Tuesday to discuss the ins and outs of impeachment in the United States.

There was discussion of current events as well as an opportunity for students to ask their own questions on the topic. The College Democrats asked three government and law professors to speak to students and discuss impeachment in legal, political, and international context. Julia Lieto ’21, co-president of the College Democrats, introduced the panel which consisted of Andrew Clarke, Brandon Van Dyck and John Kincaid.

“Even though this event is sponsored by the College Democrats is a non-partisan panel,” Lieto said. “The purpose of this panel is to provide more information for everyone from international, political and legal standpoint, regardless of yours or our political affiliations.”

In an interview, Clarke expressed how he does not like to participate in events that endorse a specific group or party affiliation.

“In terms of the questions that were asked, especially the ones asked by the people organizing, they were more about process and precedent,” Clarke said.

“When I teach, when I analyze politics, it is to help understand what is happening, so that people can form their own opinion about what should happen,” Clarke added. “It’s hard to know what you should think either party should do, until you really gather all the facts about how the process works.”

“You need two thirds of the Senate, which is 67 senators, to vote to convict the president to be removed,” Jeske explained.

During the panel, Kincaid further explained the process if Trump were to be taken out of office.

“If the president is removed from office, Pence becomes the president,” Kincaid said. “Then under the 25th amendment to the Constitution, Pence would nominate someone to serve as Vice President and a majority vote of both houses of Congress would need to approve his choice.”

The panelists were asked a variety of questions focused on the method and opinions on impeachment.

There was a common concern between the professors with the balance of powers in the executive branch in particular during the panel. There was further discussion of the normalization of impeachment in the United States, and the pros and cons of each.

“[With] a president who’s facing an impeachment inquiry, the president can bend the rules in order to prevent Congress from being able to successfully impeach him,” Van Dyck said. “To me this connects to a very important question, why is the normalization of impeachment bad?”

Kincaid responded to this notion raised by Van Dyck, referring back to the origins of the act of impeachment.

“I think impeachment is an antiquated notion. When the constitution was written, there were no political parties,” Kincaid said. “My view is that impeachment is going to be a really high bar therefore to overturn the vote of the people.”

Clarke explained that having student-driven events like this panel is not only beneficial for the students but also useful for him to clarify questions he may have.

“Most of us are here because we really like student engagement,” Clarke said. “We like the Lafayette student body, so for me it’s a really rewarding opportunity to engage with students.”