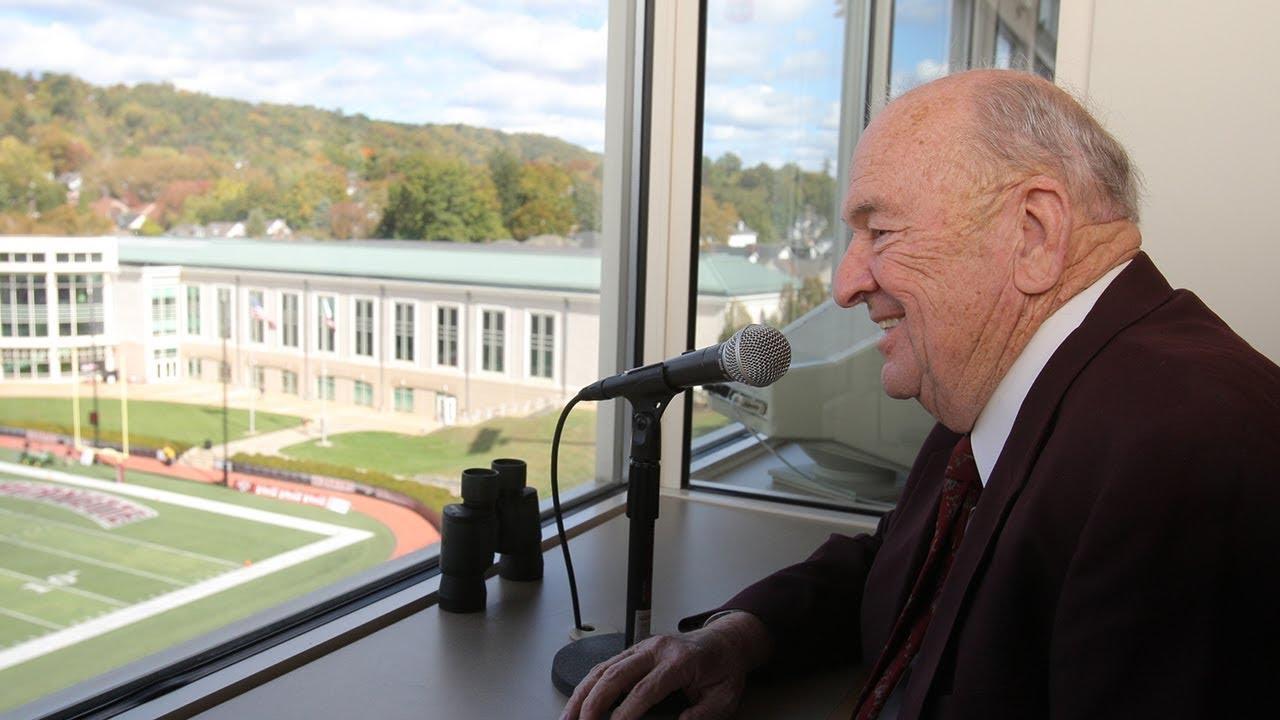 After a 50-year career as a public address announcer for Lafayette, the iconic Jim Finnen can still be found at football and basketball home games. Finnen spent time at the Maroon Club ahead of the homecoming game last weekend, where he was inducted into the Hall of Fame in 1999.

“The affiliation with Lafayette College has been a rich, rewarding experience that brought many friendships to my wife and myself,” Finnen said. “It was a most enjoyable career.”

Among his friends are Walt Manuel ‘66, whom Finnen said “excelled at both [basketball and football],” and Gene Harrison ‘54, who was a quarterback for the Leopards during his college career. Finnen said the list goes on, but noted he also keeps in touch with the Tripucka and Ptasinski families, which both have former Lafayette basketball players. Tracy Tripucka ’72 is men’s basketball’s all-time leading scorer, and siblings Anna ’18 and Joey Ptasinski ’15 both played basketball, with Joey earning a conference tournament championship.

Finnen is commonly known as the “Golden Voice,” a nickname which he said a Lafayette official started a few decades ago. He said the epithet is “flattering.”

“I’ve also been called the ‘Voice of God’ by a priest in my home parish,” he added. “I’ve been called upon many times to serve as a lector for many special occasions within the diocese of Allentown.”

After graduating from the University of Albany, Finnen knew he wanted to pursue a radio career. Before coming to Pennsylvania, he lent his voice to radio stations in North Adams, Mass. and Bennington, Vt. A colleague of Finnen’s at WMNV told him of an opening at WEST, and he moved to Easton.

“It was time to move up in my career and opening at a well-regarded radio station which had been out here since 1936 was a great opportunity for me and my family to join an award-winning NBC-affiliated radio station,” Finnen said.

Starting in 1961 as a news director for WEST, Finnen did play-by-play for Lafayette football and basketball. He left the station in 1964.

“I was then asked by the Associate Athletic Director George Davidson and Director of Sports Information Bob Smith if I’d be interested in being the public address announcer at Lafayette,” Finnen said. “My answer was definitely in the affirmative.”

Throughout his career, Finnen saw the Leopards move from the Mid-Atlantic Conference (MAC) to the East Coast Conference (ECC) to the Patriot League.

Though he worked for WEST at the time, Finnen said one of his most memorable Lafayette games was their first ever victory at the historic Palestra, where college basketball games have been played since 1927 in Philadelphia, where men’s basketball defeated La Salle. He also said he remembers a men’s basketball matchup with Princeton in the 1960s.

“Bill Bradley, the former candidate for president of the United States, we took him into a double overtime before Princeton won,” Finnen said.

He finished his career in 2015, a year highlighted by men’s basketball winning the Patriot League tournament and football’s victory over Lehigh in The Rivalry’s 50th installment.

“Never when I first did the job broadcasting the game in Allentown [did I think] that fifty years later it would conclude in front of the crowd at Yankee Stadium,” Finnen said.

Finnen said he was “very pleased to conclude [his] Lafayette career with those two great contests. It was the most appropriate way to conclude a 50-year career.”