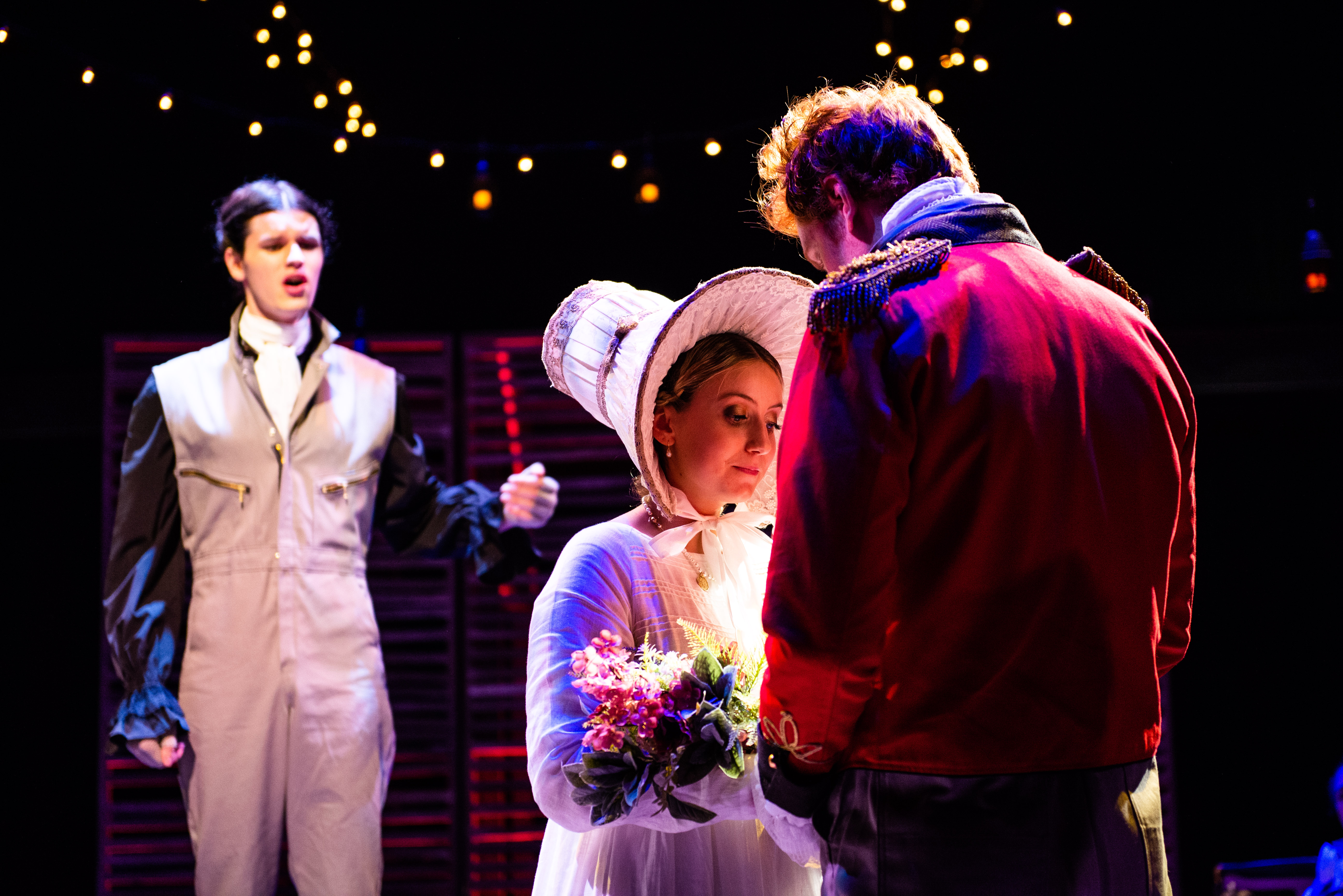 With slapstick humor and breaking of the fourth wall, ‘Vanity Fair’ feels at times jarringly self-aware and of-the-present. (Photo by Brandon Marin ’22)

Similarly, we see those same parallels at Lafayette’s production of “Vanity Fair.”

“Vanity Fair” centers around the story of two women who meet as peers at the same school: the docile, nurturing, mild-mannered Amelia, who is born to some wealth, and the hot-tempered, scrappy, gold-digging Becky, who is comparatively poor.

In the vision of Hamill and the Lafayette theater department, Thackeray’s original pageant of pettinesses, social climbing and class anxiety assumes a distinctly modern sensibility. The college’s set is strikingly minimal and era-ambiguous, with faux wooden paneling adorning the floor and a few chests and chairs utilized to construct various settings.

The costumes are decidedly dated, visually calling upon the highly gendered division of petticoated women and suited men of another age. Yet its dated nature is challenged by the gender ambiguity present in the characterization of the actors wearing them, many of whom alternate between male and female roles over the course of the play.

Moments of slapstick humor and breaking of the fourth wall are at times jarringly self-aware and of-the-present, as is the language of the play. For example, Becky, played by a fiery, riveting Olivia Coughlin ’20, who is constantly exploiting her sexuality to gain any sense of progress or agency in the world, refers to herself as a “nasty woman.”

This echoes the infamous 2016 Trump reference to Hilary Clinton: a woman similarly perceived as ambitious, as well as cold, unlikable and scheming, perhaps in part because of that ambition. The figure of Amelia is in a way similarly subversive and modern.

Though cloaked in a shroud of morality and antiquity by the nature of her devoted widowhood, Amelia, played by a charismatic Sarah Frankel ’21, is a woman of immense, quiet strength raising her child as a single mother who supports and cares for her father uncomplainingly, even in the wake of the great personal tragedy of her husband’s death.

For all the extrapolated politics of “Vanity Fair,” however, it is still simultaneously a tale of great frivolity. The dress of the two female leads is notably stripped-back, bringing attention to the true nature of vanity in the play.

Vanity here is not in the material but in the personal: an inherent, inescapable nature of self-absorption and conceit manifest purely in the characters themselves. Moments of narration and physical drama transform the actors into mechanized props repeating motions representative of their ambitions and motives.

The obliteration of family and wealth is rendered totally inconsequential by the superficial absorptions of those it should impact most deeply. The characters are totally absorbed by their wants and “nothing can stop them,” which is a semi-ironic statement considering the rigidity of British classism and gender roles.

Yet, this certainly doesn’t stop these characters from trying, and for that, as we are told, “you don’t get to judge me.”