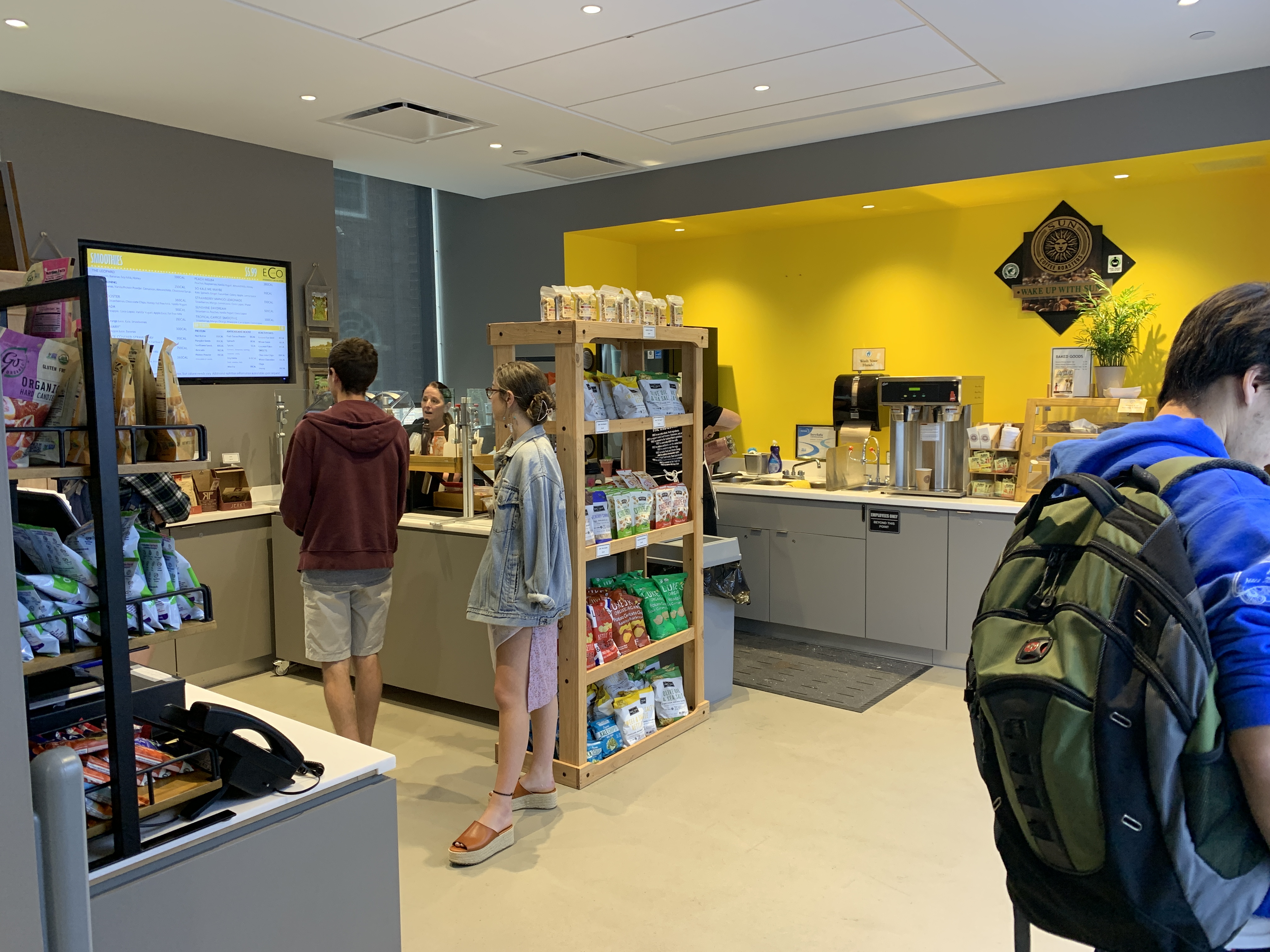 Students have been enjoying the vegetarian options at the new cafe, but the supply of vegetarian food frequently runs out. (Photo by Abi Olofin ’22)

The ECO Cafe in the new Rockwell center has been touted for its commitment to sustainability and locally sourced options. Despite the push for more eco-friendly options, however, some students still feel there is much to be done to decrease the campus’s environmental impact.

The ECO cafe, or the Environmentally Conscious Options cafe, opened with the Rockwell building on August 26, and has quickly become popular among students, often selling out of food before 12:30 in its first week being open.

In addition to offering many locally sourced options for food, one of the main features of the cafe is its emphasis on reducing waste in packaging.  According to the new Director of Sustainability Delicia Nahman, reducing the waste coming out of the cafe was factored into many of the decisions about the cafe’s design.

“[A] number of partners, including the Office of Sustainability, Facilities Services and Dining Services are working together to get as close to zero waste as possible,” she said.

One major concern with the compostable packaging, however, is that there is currently no place to dispose of it.

“They promote that this packaging is compostable, but there are no designed receptacles to actually compost the containers,” said Nicole Ducret ‘21, who is a biology major and environmental science minor. “I have spoken with a few eco-reps about this, and I know that they are working on setting up a system to compost.”

Ducret also noted that the cafe sells single use plastic water bottles despite there being a water bottle filter close by the cafe, which she said is “completely unnecessary and only [contributes] to plastic waste.”

“I think that in order for [the cafe] to gain more credibility the packaging disposal needs to be addressed,” Ducret said.

Some students are also worried that a lack of education may lead to unintentionally increasing waste output. Although much of the packaging is compostable, some students fear that people won’t know how to properly dispose of the packaging when they are finished eating.

“I think one of the biggest challenges, when they put composting in place, will be that students aren’t really going to know…’is the package compostable? [W]hat do I do with my utensils? Where does my napkin go?'” said Addie King ’21, eco-rep and student ambassador for the Office of Sustainability. “[I]t’s a lot of education.”

Nahman noted that the school is aware of these concerns, and that there are still aspects of the cafe that they are working on improving.

“[These improvements] include implementing a robust composting program that can accept food waste and packaging, as well as signage and education of waste disposal to visitors and occupants of the cafe,” she said. “As we know, this cafe is new in concept to Lafayette and the focus on supporting local, organic and fair-trade food was intentional on dining’s side.”

Another important aspect of the ECO cafe is the increased number of vegetarian options offered.

“I was beyond excited last semester when I learned about the project to bring even more sustainable food to campus,” Kate Rogers ’22 said. “Sustainable eating is really important to me. It’s [one of] the reasons I became a vegetarian, so having food that I know comes with minimal food miles, has eco-friendly packaging, and is supporting local businesses is a really great option.”

The increased options have been well received by students, but the cafe often runs out of vegetarian options early in the afternoon. Some students have also questioned the use of beef in the cafe, which has been reported by the New York Times as causing 10% of the total anthropogenic greenhouse gas emissions.

“As a vegetarian on campus, I was very excited for this cafe to open and have novel food options in a convenient location,” Ducret said. “After a few weeks though, I realized that there are really only a few vegan or vegetarian options and they often run out halfway through the lunch rush.”

“Many of the salads contain meat, and most of the sandwiches are the turkey or ham sandwiches that you can find anywhere else on campus,” she added. “It was disappointing to see that the same meat-containing lunch options were offered just with different packaging.”

King said she has also had trouble purchasing vegetarian items later in the afternoon after the cafe has run out.

“[By] the time I get there, there’s only sandwiches with meat left,” she said. “I don’t know if the vegetarian options are more popular, or they just don’t make as many of them.”

Ducret also said that, although she still believes meat options should be offered on campus, she had hoped the ECO cafe would “push the boundaries of sustainability to actually make an impact on campus,” and would encourage students to “be more critical of their diet and their own environmental impact.”

Some students have more radical suggestions.

“I think it would be awesome to make…a completely vegan or vegetarian cafe,” King said. “That would be so cool.”

King said that she understands that the administration might worry that an all-vegetarian cafe might not be well received, but she said she thinks students “would be open to it.”

“It’s just…normal food,” she said. “I think it could change a lot of people’s lifestyles and kind of open their eyes to that. [It’s] not weird to eat vegan or vegetarian, you know?”

Ducret noted that Bon Appetit, the manager of the cafe, has been very receptive to feedback from her, and that they told her that if students have thoughts or concerns, they can speak directly to the staff in the cafe.

Rogers said she is excited to see the cafe become even more sustainable after the implementation of the compost program, and that she prefers the new cafe to the old grab and go stations.

“I think ECO is a great cafe and sets us on a great path for constantly improving our part in the food loop,” she said.

Dru Germanoski, Environmental Science & Studies Chair, said he thinks positively about the ECO Cafe. He said that it should be viewed more as a first step forward rather than as having problems.

“This is a ground-breaking approach to a dining option at Lafayette, [so] any perceived deficiencies this early in the game should be viewed as opportunities to make additional strides forward rather than problems,” he said. “The most important lesson at this point is that students are embracing this approach to ECO food options with tremendous enthusiasm. Hopefully this will inspire or force other venues to step up their game in offering ECO, and that the ECO cafe is going to be the nucleus for further change in sustainable dining options on campus.”

“[This] cafe represents significant cooperation between food services and faculty and student desire for more sustainable food options,” he added.

“We are so proud to have students helping us think through solutions,” said Nahman. “We hope to make strides in this area this academic year and hopefully the ECO Cafe will serve as an embodiment of Lafayette’s sustainability commitment and an exemplar for retail locations across campus.”