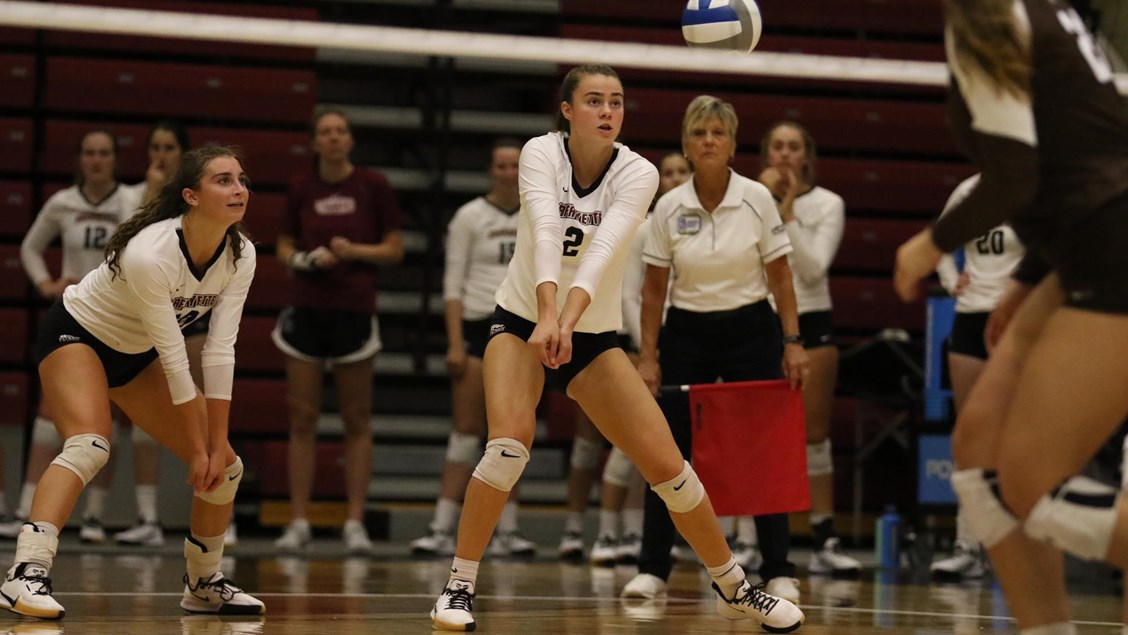 Freshman outside hitter Ellie Carrera-Justiz (2) led the team in kills against Bucknell with 13. (Photo courtesy of Athletic Communications)

The Lafayette volleyball team opened their conference schedule with a pair of losses last weekend to Lehigh and Bucknell. The Leopards fell in five sets to the rival Mountain Hawks on Friday, before the Bison earned a four set victory over The Leopards on Sunday. The team now holds an 11-7 record with a 0-2 mark in the Patriot League.

In the first game against Lehigh, the Leopards won a close first set 26-24 after a late kill by sophomore outside hitter Grace Tulevech. Lehigh came back to win the second set 25-14. The two teams split the next two sets, as each earned identical 25-22 victories with Lafayette winning the third set and Lehigh winning the fourth. The Mountain Hawks prevailed in the fifth set 15-12 to win the match.

“On a competitive front I think we put ourselves in a great situation to have opportunities for the match [against Lehigh] to go our way,” head coach Ryan Adams said. “I think we battled and we did a lot of really good things. But result aside, I’m pretty happy with the takeaway and it only helps us competitively moving forward.”

Tulevech led the team with 15 kills, fellow sophomore and outside hitter Leanna Deegan tallied 14 kills and senior outside hitter Katrina Ruggiero had 12 digs, 10 kills, and a block and an ace. Freshman outside hitter Grace Steurer anchored the defense with 16 digs, while senior setter Julia Howard paced the Leopards with 23 assists.

“The result didn’t go our way, but I don’t think that was the biggest takeaway,” Howard said. “I think it was more how we played together and the growth that we got in [the Lehigh] game, and I think that’s huge improvement for us.”

“That’s a really strong Patriot League team, it was a big test and I do think that we performed well,” she added.

Bucknell got off to a fast start in the second game of the weekend for the Leopards, winning the first set 25-17. Freshman outside hitter Ellie Carrera-Justiz recorded four straight kills late in the second set to push Lafayette to a 25-21 win and even the match at one set apiece. The Bison narrowly won the final two sets, 25-22 and 25-23.

“It’s still so early in conference play,” Howard said. “We had a huge preseason, we’ve had so many matches lately also just really packed in, so I think that it’s a lot and it’s been really good exposure especially with a lot of young players.”

Carrera-Justiz led the team with 13 kills, while Tulevech and Deegan added 10 apiece. Howard chipped in 20 assists, junior setter Jenna Bailey had 19 assists and 11 digs, and Steurer contributed 15 digs, a pair of assists and an ace.

“[The Bucknell game] was another opportunity for us to get used to playing with each other, playing a Patriot League team, and I think what we’ve done in the past few weeks, this past weekend, it sets us up to do more good things this next weekend,” Howard added.

Howard noted that the senior leadership, consisting of her, Ruggiero and outside hitter Sonia Musso, has benefited the team so far after last year’s squad had no seniors. She said that Ruggiero and Musso have a great “presence” and are “really good vocal leaders” who pull the team together.

“The three of us really work hard together to get things done, to make sure things keep running and to promote the right kind of culture on our team,” Howard said.

Despite the recent losses, the team went on a 10-game winning streak during non-conference play and can secure their best season since 2009 with their next win. Howard attributed the recent success to a “mindset shift” that focuses more on improvement rather than end results.

“I think point production and things focused more on us than anybody else is our number one priority,” Adams said. “And that’s not just this weekend, that’s been the previous weeks and is going to go through the Patriot League [schedule]. So it’s us first and then we’ll worry about whoever else is on the court.”

“I think it’s really just our ability to focus on this year and set things aside from anything that’s happened in the past, any past records,” Howard added. “We’re really not focused on that and I think that helps a lot. We’ve had the mindset, that’s been promoted through our coaches, to just have fun and other things will fall into place.”

Next up for the Leopards is a trip to Annapolis, Md., for a Patriot League matchup with Navy at 7 p.m. tonight.