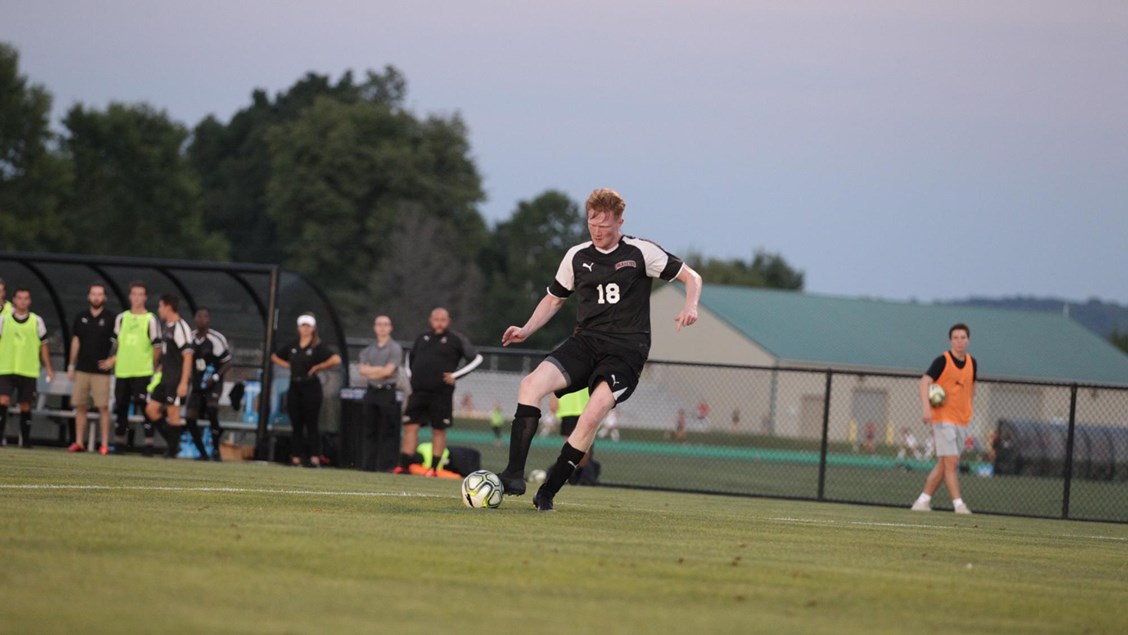 Men’s soccer will play their next conference game against Loyola Maryland tomorrow at 1 p.m. (Photo courtesy of Athletic Communications)

The men’s soccer team won both of their games last week, beating Holy Cross and Army to maintain their 3-0 Patriot League record. The Leopards won a double-overtime game, 3-2, at Holy Cross last Saturday and then shutout Army 5-0 at home on Wednesday.

In the Army game, five different players recorded goals in a balanced offensive effort. Freshman forward Hale Lombard opened the scoring with a header in the 40th minute, off assists from senior midfielders Ryan Goncalves and Chris Gomez. Freshman midfielder Yiannis Panayides put in the second goal for the Leopards off a feed from senior forward James Gibson just after the halftime break.

Junior forward Martin Ssessanga pushed the lead to 3-0, after another assist from Gibson, and senior midfielder Adam Bramson notched a goal of his own just two minutes later with the assist credited to Gomez. Freshman midfielder Benji Grossi capped the scoring for the Leopards with his late tally in the 86th minute, with the assist from Lombard.

Last weekend, the Leopards beat Holy Cross 3-2 in double overtime in Worcester, Mass. Lafayette took a 1-0 lead into the halftime break after Goncalves found the back of the net in the 18th minute.

The Crusaders responded with back-to-back goals to take a 2-1 lead midway through the second half. Bramson scored the equalizer in the 76th minute which ended up forcing overtime. The two teams battled through a scoreless first overtime before Gibson netted the game-winning goal in the second overtime.

“Goncalves was out on the left and he dribbled a man and [passed] in some good service, my initial header really should’ve gone in but it hit the [cross] bar,” Gibson wrote in an email. “There was a scrap around the penalty spot and I managed to get my left boot on it and hit the bar again and [it] bounced over the line. [The goal] was a bit of a scrappy one, but a goal’s a goal and a win’s a win.”

Lafayette is currently in a three-way tie for first in the Patriot League with Lehigh and Navy. The Leopards have already passed last year’s win total and will secure their best season since 2012 with their next victory this fall.

“Last year we started off hot, but once we got into the Patriot League it all went downhill,” said sophomore midfielder Will Echeveria. “This year feels fantastic, we’re on such a hot streak that even if we were to lose a game, we can get it back. We know we can get the wins.”

The team changed their strategy this season and has increased their shot volume, according to Echeveria, including switching to a more aggressive strategy that revolves around getting as many shots on goal as possible. Against Holy Cross alone, the team took a combined 30 shots.

“Last year we would try and defend for ninety minutes, but this year we’re more aggressive. We’re trying to put more pressure on the opponents, which leaves us more susceptible to a counter attack but we know can handle it and put the ball in play,” Echeveria said. “Our shot volume has improved, against Holy Cross we took over 30 shots, while last year we were hoping for at most 10 shots a game.”

In addition to the strategic changes and increase in shots, Echeveria said the team’s mentality has evolved.

“[We’re] staying hungry and [we] know that every game from here on out is going to be tough, in the Patriot League anyone can win on any given day so it’s just about making sure we’re focused and prepared for a battle every game,” Gibson wrote. “I’m just really impressed with the team as a whole and the style of play that we have introduced this year. It has really taken us to the level that we need to be at to consistently compete and win games.”

Next up for the Leopards is a trip to Baltimore tomorrow to take on Loyola Maryland at 1 p.m. in a conference matchup.