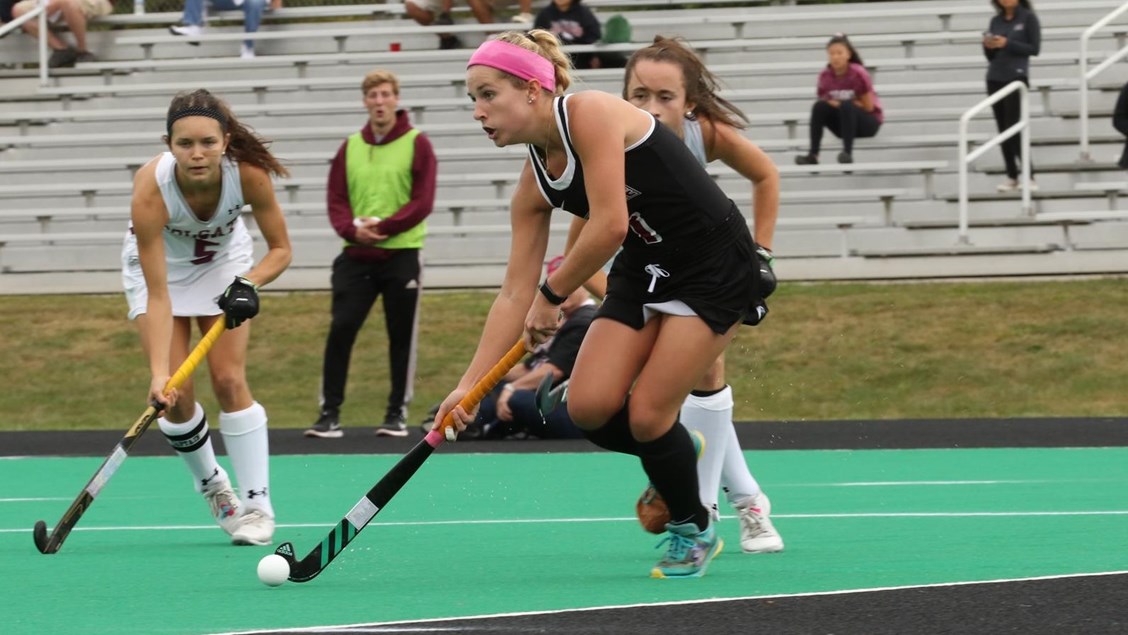 The Lafayette field hockey team won a pair of games last weekend, beating Colgate 4-0 in a conference matchup on Saturday before taking down 25th nationally ranked Monmouth in a 2-1 double-overtime game the following day.

The scoring started early for the Leopards against Colgate, with sophomore forward Molly McAndrew’s goal hitting the back of the net just 2:45 into the game, assisted by junior midfielder Anna Steps.

“It was really important that we came out and set the tone,” McAndrew said. “[We proved] that we were here to play, we chose how we wanted the game to go.”

The Leopards added three more goals before the half. Senior captain and defender Lisa van der Geest added two, both with the help of Steps and freshman defender Simone Hefting assisting. Van der Geest also assisted senior midfielder Caroline Turnbull’s goal in the 19th minute, as she paced the offense with two goals and an assist.

“Most [of the] shots came from corners,” van der Geest said. “It’s a great thing that I can contribute attacking wise on corners. A lot happens before getting that corner. It’s on the forwards to create those opportunities. Even though the stats are mine, the entire corner unit did their individual jobs to contribute to the team’s success.”

Colgate recorded just two shots overall (neither on goal) and had two corners in the game, compared Lafayette’s 15 shots and 12 corners.

Two keys to ending the game in a shutout are creating two-on-one defensive plays and carefully marking up against opposing attackers, Hefting said.

“One [of our] core value[s] is being tough and relentless defensively, and not being afraid to dive to keep the ball out of the net,” McAndrew added. “It’s about having the ‘denial mindset’ that no one else will get the ball besides you.”

Sunday’s game didn’t start off the same way for the Leopards, with Monmouth putting the first goal on the board at 13:04. Monmouth held onto the lead until the second half, when senior midfielder Cameron Costello scored her first goal of the season off a rebound from McAndrew. The goal ended up forcing the overtime for the eventual Leopards’ win.

“We were gonna do whatever we could, no matter how tired we were,” McAndrew said.

Senior goalie Sarah Park stopped a point-blank Monmouth attempt just over a minute into the extra frame, and later stopped a two-on-one opportunity as she dove to swat the ball away from the cage. She finished the afternoon with three saves.

Junior midfielder Audrey Sawers stepped in for Hefting, who was injured in Saturday’s game. Sawers added a late defensive save to hold Monmouth to just one goal.

“She did really good,” Hefting said of Sawers. “She’s usually an outside midfielder and had to go in the back field, but I think she played very well.”

“She adapted very well,” van der Geest added. “[Sawers] was a standout player for me on Sunday.”

McAndrew netted the golden goal, assisted by van der Geest, resulting in a double overtime victory for the Leopards.

“As soon as I saw the turnover happen in the midfield and Caroline Turnbull had the ball, I knew we’d be able to create a three vs. three situation,” van der Geest said. “When [Turnbull] passed me the ball I saw that I could pass to [McAndrew] instead of trying to beat my defender and go for my own shot.”

“It was an awesome feeling to be able to win as a team,” McAndrew said. “Everybody contributed to that happening.”

The Leopards continue their season tomorrow at noon against conference competition Boston University.

“This week, we plan to keep going hard even though we just got two big wins,” said McAndrew.

“There’s a lot to take away from this weekend that we can continue to do, something we’re focusing on is pressuring,” van der Geest added. “Our coaches do a great job of preparing us by showing us film and giving information about what to expect from our opponents. A lot of pieces are already in place, we just need to keep this flow going.”