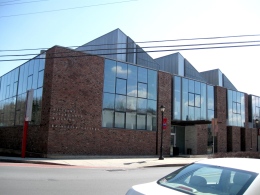 Director of Public Safefty Jeff Troxell said the backpack was stolen out of the Williams Visual Art Center.

The Department of Public Safety responded to a call on September 12 from a student reporting a theft of her backpack from the visual arts building on the college’s downtown campus. Robert Douglas, 57, of Allentown, was arrested by Public Safety officers outside of Buck Hall last Wednesday, the 25th, according to The Morning Call.

Director of Public Safety Jeff Troxell said that the investigation is “still active” and was unable to confirm the timeline of the theft and subsequent arrest. He said the call from the student came in at 9:48 a.m. on the morning of the 12th, and that Public Safety “set up surveillance” before catching Douglas.

The stolen bag contained “electronic equipment,” including a laptop, that was worth a couple thousand dollars total, Troxell said. He also noted that nothing was damaged in the bag and that Douglas was compliant with the responding officers.

“In my opinion, the officers did a good job of surveillance, making initial contact and using good de-escalation technique to make the arrest,” Troxell said.

Douglas did not force entry into the visual arts building, which is open to the public, and found the backpack in an “open classroom,” according to Troxell.

“I think this arrest was a good arrest, it resulted in a non-confrontational outcome,” Troxell said.

“When I say ‘good arrest,’ it means there was a report with details, we set up surveillance, caught the perpetrator, made the arrest and nobody got injured, both the suspect and the officers involved,” he added. “To me, that’s a good outcome.”

Troxell said that Douglas initially “denied any involvement,” and that his reaction was one of surprise.

According to The Morning Call, Douglas is being held in county jail with a $50,000 bail. Lehigh Valley Live also reported that Douglas was charged with burglary, criminal trespass and theft after he entered a home on Spring Garden Street in downtown Easton and stole $250 cash from a purse on September 10.

A 2012 article from Patch.com said that Douglas was accused of multiple thefts on the Lehigh University campus between 2009-2012, including two laptops, two cell phones, two wallets, keys and an iPod.

Troxell called the theft a “crime of opportunity,” and advised students to watch their valuables and be cognizant of theft that could happen at any time.

This web site definitely has all of the information and facts I wanted about this subject and didn’t know who to ask.