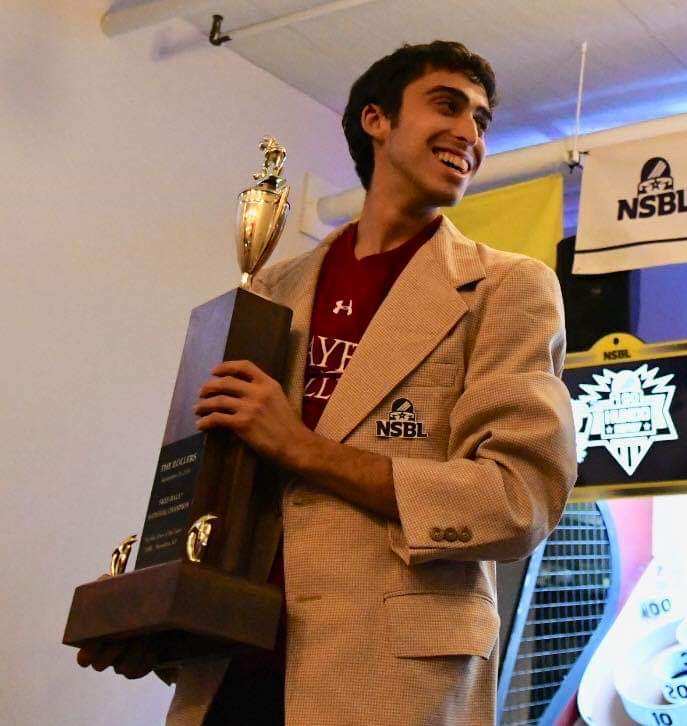 His opponent had one shot left, and it needed to be perfect. The Skee-Ball Kid closed his eyes. When he reopened them, he saw the ball bounce off the back corner. No good.

Elan “Skee-Ball Kid” Footerman ‘20, had just won $10,000 in the National Skee-Ball Championship in Brooklyn, defeating the defending champion Joey “The Cat” Mucha by a score of 4150 to 4080.

“I jumped up and screamed,” Footerman said. “I hugged my parents and sister. I couldn’t do anything else, I just screamed. The entire crowd was chanting ‘Skee-Ball Kid.’”

Footerman had to qualify for the tournament over a few months during the summer along with hundreds of others, before going into the final rounds last Sunday. He was ranked third overall after a strong August showing in which he was the first to qualify from Brooklyn, which earned him another $300  and a first round bye in the final.

It was a bigger tournament than Footerman has been used to entering, and he said he wasn’t sure if he would have a chance to win until he played his first few rounds.

“I don’t play a lot,” Footerman said. “I don’t get to practice often. A lot of the competition, they own machines or they go to the bar a couple times a week to play Skee-Ball.”

It looked like Footerman was going to suffer a loss at the end when Joey The Cat overtook his lead in the ninth frame out of 10, when Footerman scored a 270, his lowest total of the final. He then missed his first three of the last frame.

“I got up there for the last frame, and the first two I threw and felt good off my hand,” Footerman said. “When I threw the third ball I missed horribly. I took a step back and said I need to focus, I can’t afford to miss another one now.”

“He had just made a 450 the frame before, so everyone knew he was capable of it,” Footerman said. “Needing to hit his last two 50s, he missed his second-to-last throw, meaning he would have to hit 100 on the last throw to win it. You could tell he was visibly shaken.”

Some of his friends were watching the live stream at Lafayette.

“We were really excited when he won the tournament,” Jordyn Brosemer ‘20 said. “It was by far the best game of Skee-Ball I’ve ever seen. I watched the five-hour stream until midnight, and I was trying to study in Acopian as I watched.”

“That was the most excited I’ve been watching a sporting event in years,” Joe D’Elia ‘20 added.

Footerman’s strategy is a “hybrid approach,” in which he first aims for 100s, but switches to 40s when he misses. Though, against better opponents he said he doesn’t always have the luxury of switching down. In the final frame against The Cat, he was mostly 100s before finishing with a conservative 30.

Along with winning this past National Championship and the “Hundo Derby” on Saturday where he made the most 100 shots, he won three years in a row at Wildwood, NJ, at the “World Championship,” which is only open to competitors from the US, with $1000 payouts each. His first win in Wildwood was his first major tournament.

“I was vacationing there with my parents,” Footerman said. “My dad noticed a sign saying World Championship Skee-Ball Tournaments. We stopped in and I played a couple games. They guy who worked there said I should come back for the tournament because I would be one of the best, so we went back on Labor Day that year and sure enough I won.”

Footerman said he got into Skee-Ball after arcades were rebuilt in Point Pleasant, NJ, after Hurricane Sandy. They kept posting jackpots and, according to Footerman, he kept winning them.

“More important to me than the money is the title,” Footerman added. “Being able to say I’m the best in the world at something is something not many people can say. Coming into this tournament, there were a lot of people who said ‘The kid is pretty good, but he can’t do it on a big stage.’”

“I proved them wrong.”