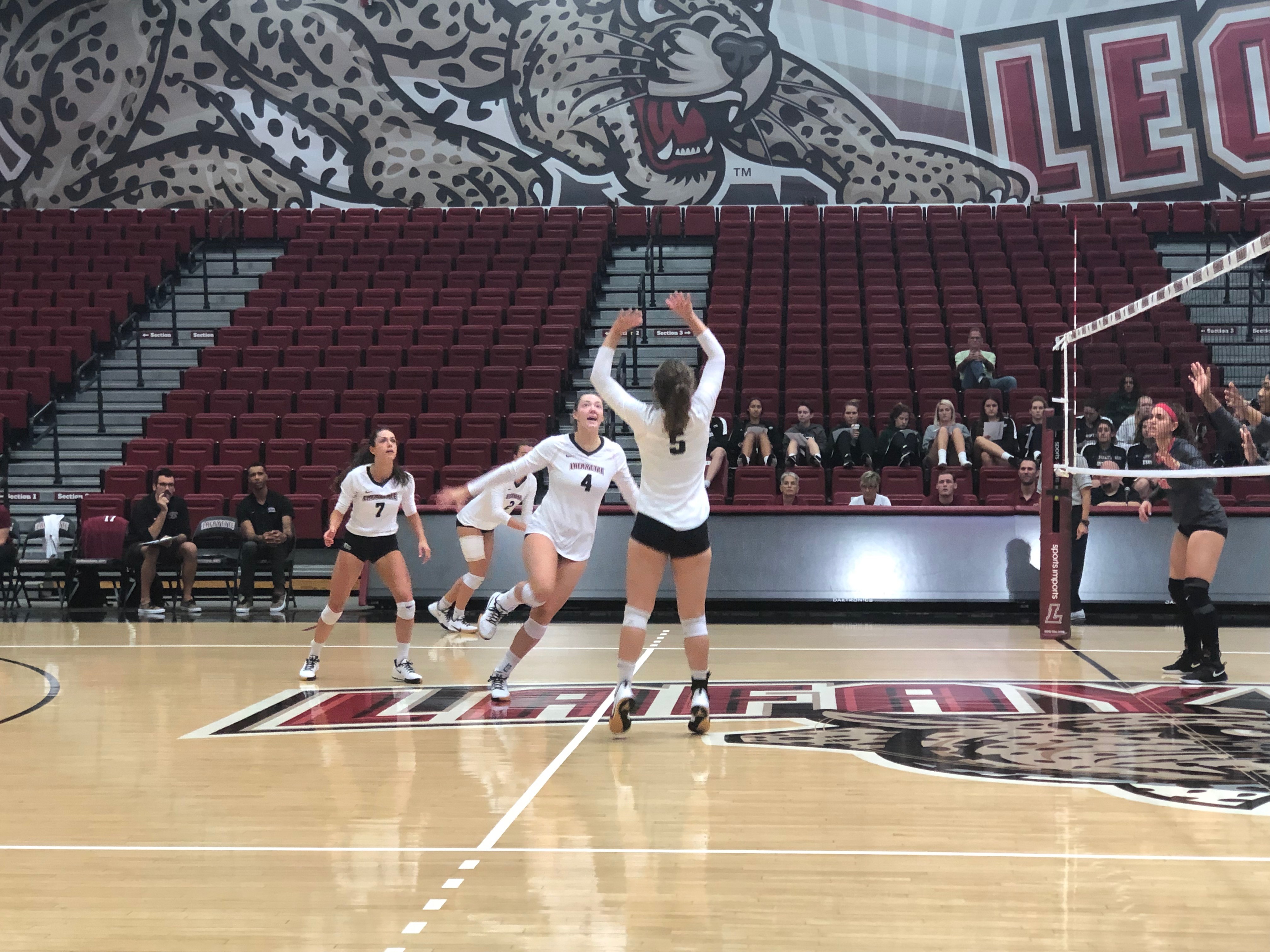 Volleyball has reached their highest win total since 2015. (Photo by AJ Traub ’20)

The volleyball team will ride a 10-game win streak into their Patriot League opener against Lehigh this weekend. The Leopards have won five matches in the past week and currently sit at 11-5, their highest season win total since 2015.

The Leopards lost five of their first six games but haven’t lost since September 7 during their streak. The team is bouncing back after a 5-23 season last year.

“We’ve made a lot of changes,” sophomore outside hitter Grace Tulevech said. “We’ve grown as a team and our new coach [Ryan Adams] wants us all to lead.”

The Leopards started their week off with the Hartford Invitational. The team played Hartford and Central Connecticut State on day one of the invitational, and won against both. In their match against Hartford, the Leopards lost the first set 17-25, before coming back and winning three straight sets to take the match.

Tulevech led the way with 20 kills, while fellow sophomore outside hitter Leanna Deegan registered 19 kills. Tulevech leads the team with 200 kills and Deegan is second on the team with 198 kills this season.

“Personally it’s been about fine-tuning the little things,” Tulevech said. “Be a team and a player that’s consistent and be someone the other players can look up to. My goal this year is to better myself and better my teammates.”

The Leopard offense was again paced by Tulevech in their second match of the day against Central Connecticut State, as she led the team with 19 kills. The Leopards won a close first set 25-22, but lost the second set 25-11. The Leopards responded by taking the third and fourth sets to win the match. Freshmen outside hitter Ellie Carrera-Justiz registered 12 kills in the match while also recording four blocks.

On day two of the Hartford Invitational, the Leopards beat St. Francis Brooklyn and Maryland Eastern Shore (UMES), 3-2 each. The Leopards went back and forth with St. Francis Brooklyn, taking the first, third, and fifth sets, while St. Francis won the second and fourth. Tulevech and Deegan led the teams in kills, with 19 and 17 kills respectively, while senior outside hitter Katarina Ruggiero played a role in stopping St. Francis’ late comeback with 13 digs. Senior setter Julia Howard also recorded a season-high 11 digs in the match.

In their match against UMES, the Leopards lost the first set 25-23 before winning the next two sets and taking a 2-1 lead. UMES was able to tie the match at two sets apiece before the Leopards took the final set 15-12. Deegan led the way for Lafayette with 12 kills, while Carrera-Justiz contributed 11 kills and four blocks.

In their fifth match of the week, the Leopards beat St. Peter’s in five sets to capture their 10th straight win. St. Peter’s took the first and fourth sets, while the Leopards took the second, third, and fifth sets. The Leopards took a 3-0 lead in the fifth set before St. Peter’s came back to tie the set at three. The two teams then exchanged points until the very end when Lafayette pulled away with back-to-back kills to win 15-9. Carrera-Justiz led the team with 16 kills and added a block.

“This year we’re only focusing on ourselves and how we play our game,” Tulevech said. “We’re focusing on what we need to do to prepare. We’re all super excited to play our first Patriot League home game against Lehigh.”

The Leopards will square off against Lehigh at 7 p.m. today at Kirby Sports Center to kick off their Patriot League season.