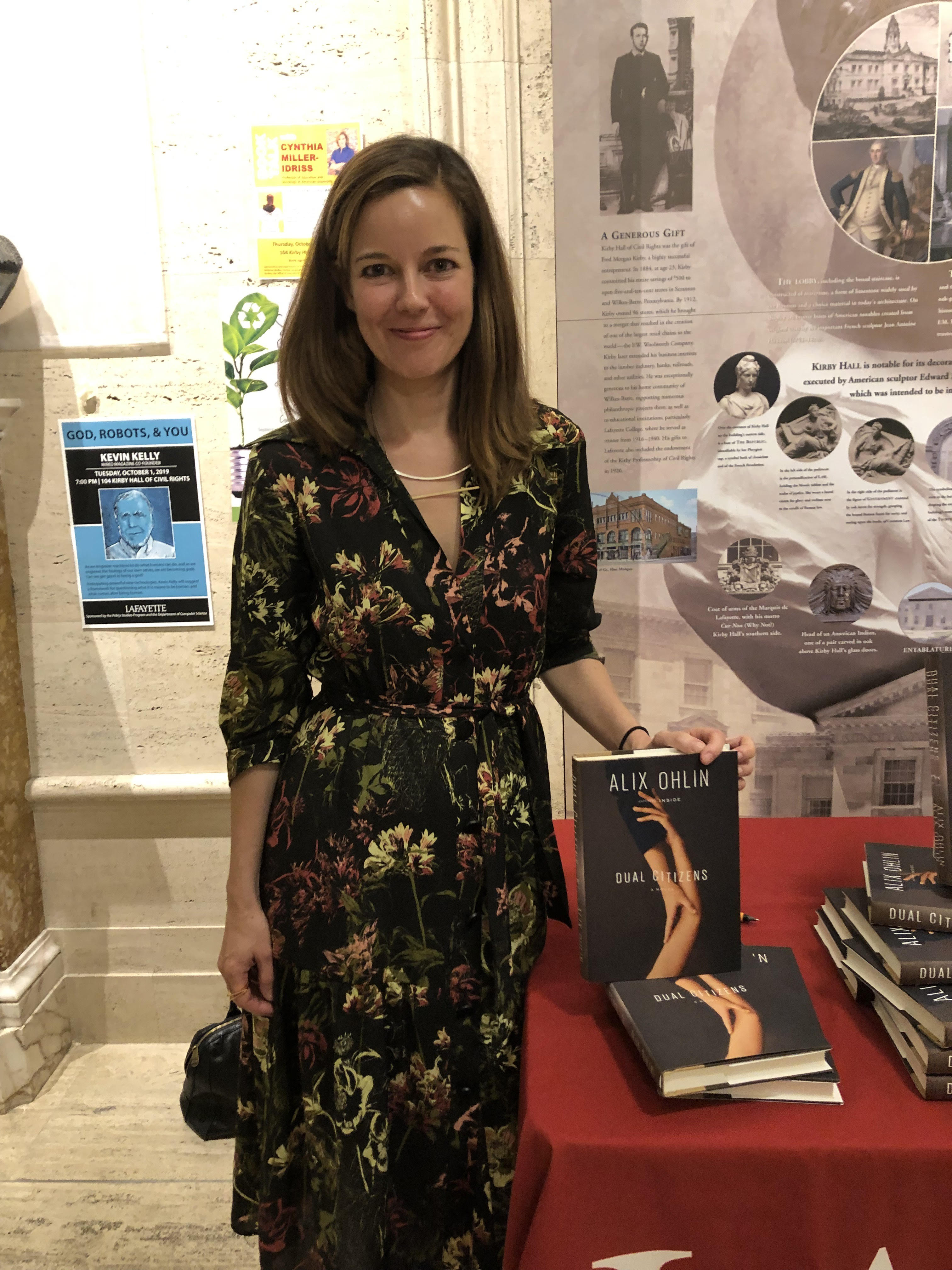 Alix Ohlin’s ‘Dual Citizens’ explores the strong relationship of two sisters through their childhood and adulthood. (Photo by Jennifer Richardson ’20)

Growing up in Canada with an American mother, Alix Ohlin found herself traveling to the United States and living in both countries, where she belonged in “more than one place,” she said.

Ohlin said that the idea of duality and dual citizens had a resonance that resulted in a story about two sisters, Robin and Lark, who form “a fierce team in childhood regardless of their differences,” according to the summary of her latest book “Dual Citizens.”

Ohlin was an English professor at the college for ten years before her move to Vancouver, Canada at the beginning of spring 2018 to teach at the University of British Columbia, where she is currently chair of the creative writing program.

On Monday, Ohlin had a Q&A session at Lafayette where she answered questions about creative writing and her newest novel, following a reading from “Dual Citizens.”

English professor Jennifer Gilmore introduced Ohlin during both the Q&A session and the reading. In her introduction, she said that Ohlin’s “stories and novels investigate deeply into the lives of her characters. In so doing, they examine why we do what we do in prose that is elegant, precise and captivating.”

When Gilmore arrived at the college, she was placed in Ohlin’s former office. In the back of the file cabinet section, Gilmore said she found a sheet of paper that “seemed to note the beginning of a novel.”

In addition to her seeing a “very extensive and quite impressive use of the Dewey decimal system,” Gilmore found a phrase that Ohlin had written: “Begin with the missing.”

“I feel like I got a special insight into the process of a writer who is at the height of her technical powers on how she began writing the book that would become her latest novel,” Gilmore said, which she later referred to as “spellbinding.”

At the reading, Ohlin read from the section when the older sister and narrator of the novel, Lark, is in college at a small liberal arts school. While Lark was in her apartment with her roommate, Robin dropped by unexpectedly pleading for Lark to take her in and allow her to live there in the meantime because things were not well back at home. However, Lark felt that Robin did not need to plead, since she had already decided to take her in.

“I was thinking about sisters, and how siblings provide you with a lifelong bond,” Ohlin said. “Your siblings know who you were as a child, and then they bring those memories into their understanding of you as an adult. And sometimes that can be wonderful, and sometimes that can also be really challenging and complicated, so it seemed like really good material for a novel.”

Ohlin was inspired by the Italian writer Elena Ferrante, who has written many stories about intense friendships between two women, which “starts in childhood, and follows them all throughout their professional and personal lives and their adulthood,” she said. “I loved those books so much, that I was inspired to try to somehow write my own version of that kind of story.”

In addition to gaining inspiration from Ferrante’s novels, Ohlin said that she has also gotten inspiration for pieces of her novel from a professor that she used to have, and from visiting her nephew at The Juilliard School.

Gilmore said that readers have an intimate and private look at these women and their different desires and the choices that come with them.

“At the same time, like the concentric circles of ripples in a pond, we see in expansive gestures the place and setting and the world these women inhabit and what indeed makes them citizens of two worlds,” she added.

Ohlin’s favorite element of craft is “time” and its elasticity, which she experiments with in “Dual Citizens.” For her, the writing process takes a “long time” because she usually experiments with multiple drafts such as the five or six different drafts Ohlin wrote for “Dual Citizen” over the last seven years.

“I’m not a big outliner. I write one draft to figure out what the story is going to be about, and then it takes me a number of successive drafts to refine it and to get it to the place where I feel like it’s finally complete.”